Netflix’s Play Something Button Rolls Out for All Users Globally 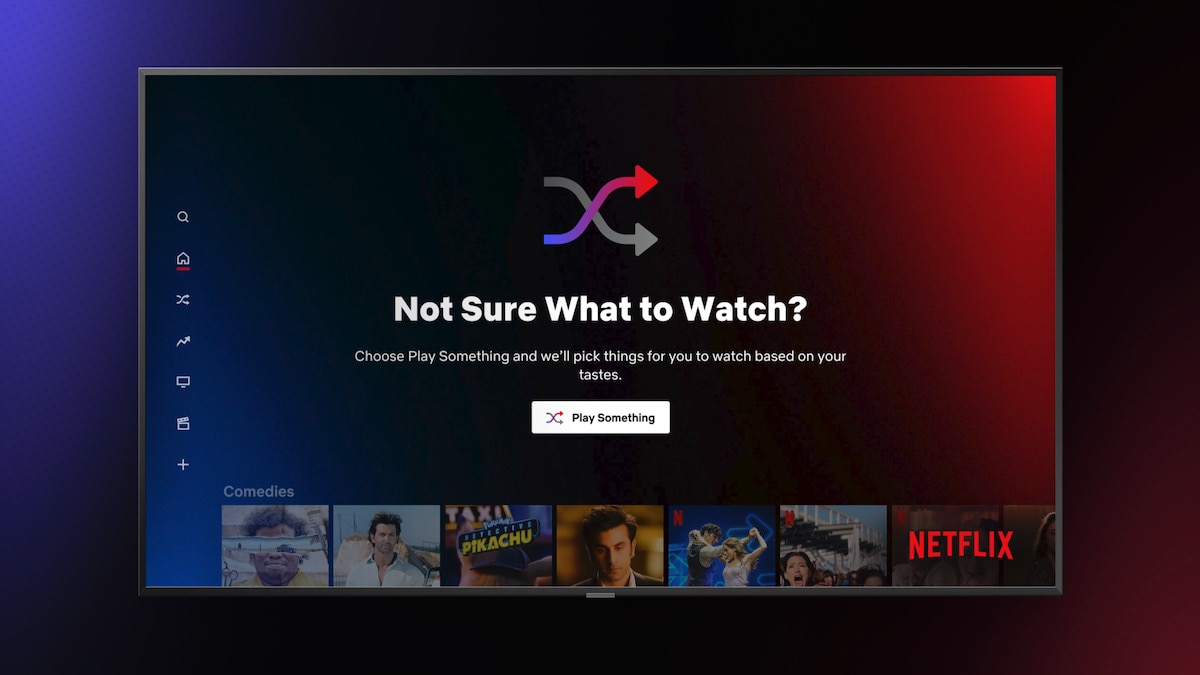 Netflix’s shuffle play “Play Something” button on TV is now here for everyone. On Wednesday, Netflix announced — with the help of Will Arnett voicing a remote tired of its buttons being pushed — that it was rolling out Play Something to all its members globally, over nine months after it first began testing the shuffle play feature. It’s quite simple: you hit the Play Something button and Netflix will pick a title from its catalogue — a film or a TV show — that draws on your existing tastes.

That means you might end up with a series or a movie you have never seen before, something you’re already watching or that’s on your list, or a show or film that you left unfinished midway through. And if you don’t like what Netflix picks for you, you can hit a “Play Something Else” button as many times as you want until you land on something that does suit your interests — a little bit like flipping the channels on television.

In its announcement video, Netflix showed a couple having trouble deciding what to watch — that’s a situation we have all been in at some point, but Play Something isn’t perfect for those situations since it only works with one profile in mind. It won’t take into account the tastes of multiple profiles before picking something for you at random. It’s also restricted to TVs/ living room devices.

But Netflix wants you to really make use of the feature, so it’s putting it in three places. Play Something will be available on the profile selection screen right under your name. You can also access it in the navigation menu (wherever available) on the left side of the screen. And lastly, Play Something will also take over the tenth row on your Netflix homepage.

What Play Something looks like after you hit the button
Photo Credit: Netflix

Play Something is also compatible with Text-to-Speech (TTS), Netflix says. If you use screen readers, head over to Netflix’s Accessibility help centre to learn how to set up Play Something over TTS on your TV.

We dive into all things Apple — iPad Pro, iMac, Apple TV 4K, and AirTag — this week on Orbital, the Gadgets 360 podcast. Orbital is available on Apple Podcasts, Google Podcasts, Spotify, and wherever you get your podcasts.
- Advertisement -


Akhil Arora covers entertainment for Gadgets 360, interviewing stars such as Christian Bale and Anurag Kashyap, covering series premieres, product and service launches across the globe, and looking at American blockbusters and Indian dramas from a global socio-political and feminist perspective. As a Rotten Tomatoes-certified film critic, Akhil has reviewed over 150 movies and TV shows in over half a decade at Gadgets 360. When he is not completely caught up with new film and TV releases, Akhil
…More

PUBG Lite Will Not Be Playable Anymore From Today, April 29; Player Support Ending on May 29

EXCLUSIVE: The wild story behind the heist of Dorothy’s iconic ruby red slippers from The Wizard of Oz is the subject of a...
Read more
Previous articleSensex Crashes Over 800 Points From Day’s High Dragged By Losses In Banks
Next articleChina successfully launches core module of its space station
LocalTakSabse Tez