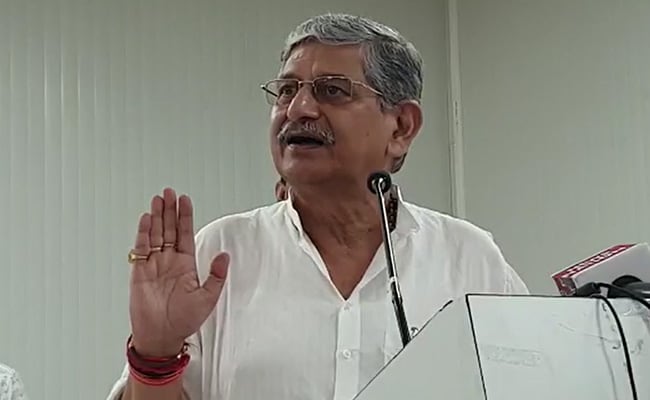 Mr Singh, who is more widely knows as Lalan Singh, said the country has suffered under the BJP’s administration. More jobs have been lost since the Modi government came to power than in any period in independent India’s history, he said.

Bihar Chief Minister Nitish Kumar’s close confidante Lalan Singh also claimed that the Bharatiya Janata Party is anti-reservation. Pointing to the 2015 Bihar assembly elections, he said that before the elections, RSS chief Mohan Bhagwat had said that the time has come to reconsider the reservation system.

Mr Singh there is no “ati-pichhda warg”, or Extremely Backward Classes, anywhere except in Bihar. “Who gave this, Jannayak Karpoori Thakur. For the first time in 1978, Karpoori Thakur identified the most backward class and gave reservation in state government jobs. When Nitish Kumar became the Chief Minister in 2005, he carried forward the dreams of Jannayak Karpoori Thakur,” he said, adding that in 1979, the Bharatiya Janata Party, which was then the Jana Sangh, withdrew support to Karpoori Thakur and removed him from the Chief Minister’s post because he had given reservation to the Most Backward Classes in 1978.

“This is their character,” he said.

The Extremely Backward Classes (EBCs) are among a focus demographic for Nitish Kumar.

The JD(U) chief took another swipe at PM Modi, claiming that he is a “duplicate” as he falsely claimed to be “ati-pichda (extremely backward)” while campaigning throughout the country.

“There is no EBC category in Gujarat, only OBC (Other Backward Classes). He (PM Modi) wasn’t even that before becoming Gujarat Chief Minister. He got his community added to the OBC list after coming to power. He’s a duplicate, not an original,” he said.

Former Deputy Chief Minister and Rajya Sabha member Sushil Kumar Modi hit back, saying Lalan Singh has insulted the most backward communities by uttering “obscene words” like “duplicate backward” for PM Modi. “This statement is a testament to the anti-backward feudal mindset of the party,” he said.

Lalan Singh was speaking at an event to welcome former BJP leader Pavandev Chandravanshi and his supporters who switched over to the JD(U).

“You did well. Now you have joined a genuine party and are not with a fake one,” he said, addressing Mr Chandravanshi and calling upon party cadre to reach out to the extremely backward communities and warn them to stay vigilant of the “behrupiya” who will come with a different face again.