“No Judiciary In World As Independent As India’s”: Law Minister Kiren Rijiju 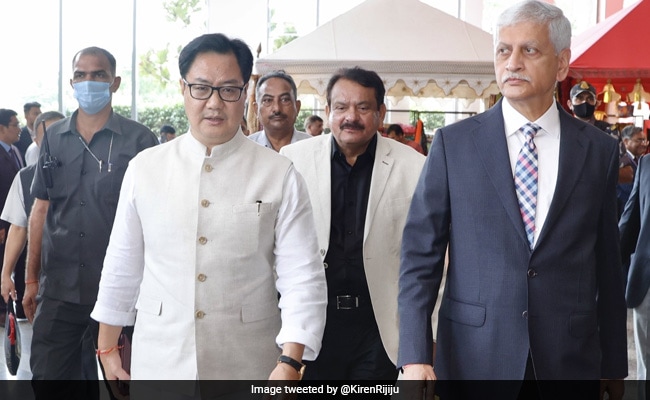 Union Law and Justice Minister Kiren Rijiju on Saturday said that “no judiciary in the world is as independent as India’s.”

This remark comes after Chief Justice of India Justice NV Ramana spoke about trial by the media in multiple cases.

“The comments made on the media trial by the CJI Ramana by electronic and social media are his observation as per the situation that exists in India and across the world…if anybody feels that way we can discuss this in the public domain and I don’t want to comment on what he said right now,” Mr Rijiju said.

“Indian judges and judiciary are completely protected and I can say clearly that no judge or judiciary is as independent anywhere in the world as it is in India,” he added.

Earlier, on the issue of the rising number of media trials, CJI Ramana said, “New media tools have the enormous amplifying ability but appear to be incapable of distinguishing between the right and the wrong, the good and the bad and the real and the fake.”

Chief Justice Ramana also cautioned that the judges may not react immediately and this should not be mistaken for weakness or helplessness.

“Biased views being propagated by media are affecting the people, weakening democracy, and harming the system. In this process, justice delivery gets adversely affected,” the CJI added.

“By overstepping and breaching your responsibility, you are taking our democracy two steps backwards. Print media still has a certain degree of accountability. Whereas, electronic media has zero accountability as what it shows vanishes into thin air. Still, worse is social media,” he said.

The CJI also highlighted that these days, there is an increasing number of physical attacks on judges.

The Chief Justice also stressed that it becomes a challenge to accept the false narrative surrounding the supposed easy life of a judge.

“There exists a misconception in the minds of the people that judges stay in ultimate comfort, work only from 10 am to 4 pm and enjoy their holidays. Such a narrative is untrue. When false narratives are created about the supposed easy life led by judges, it is difficult to swallow,” Justice Ramana said.