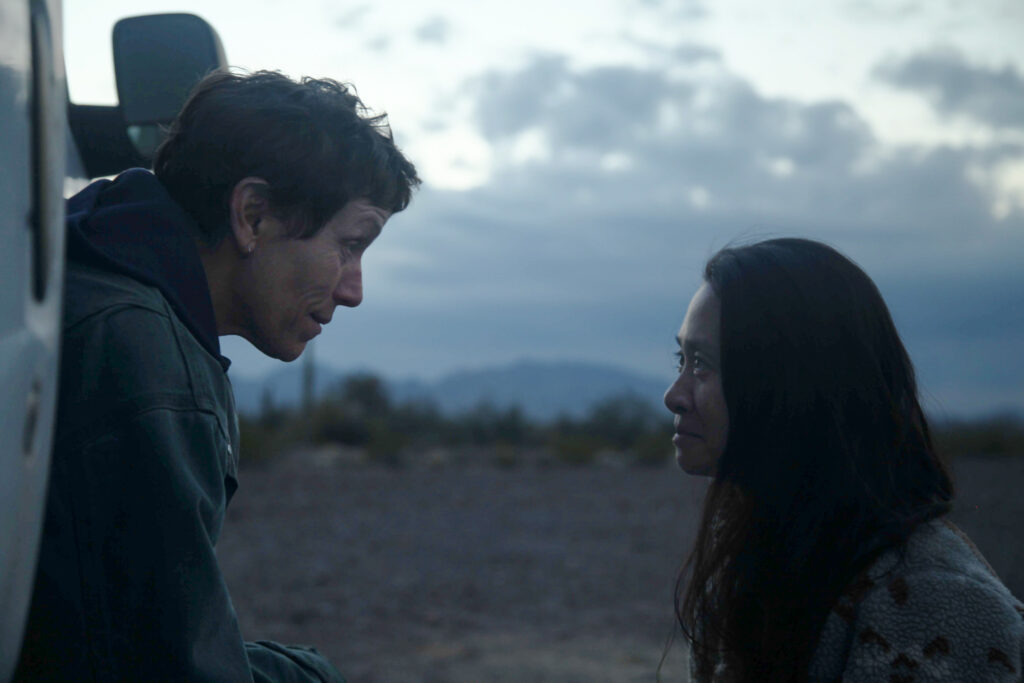 “Nomadland” was the big winner at this weekend’s Dorians Film Toast 2021, presented by GALECA: The Society of LGBTQ Entertainment Critics. The tale of a modern-day nomad making her way across the American West took home Best Film and Most Visually Striking Film, and landed helmer Chloé Zhao yet another Best Director trophy.

Calling the prize “deeply meaningful” because “Oscar Wilde is one of [her] greatest heroes,” Zhao emphasized that her film is just as much about a woman’s inner turmoil as it is her physical travels. “’Nomadland’ is about a woman who goes on a journey of grief and healing and ultimately of self-discovery and self-acceptance,” she said.

Named for Oscar Wilde’s “The Picture of Dorian Gray” and honoring the best art “from mainstream to LGBTQ fare,” the Dorian “’trophies’ are actually small pop-art portraits of the winner (sometimes in character) or a rendering of a memorable scene from the champion title.”

Carey Mulligan, who took home Best Film Performance – Actress for stylish revenge thriller “Promising Young Woman,” said the award “might be the coolest prize [she’s] ever seen.” “I’m just so happy that [the film] has resonated,” the Oscar nominee added, “and I’m so grateful to [writer-director Emerald Fennell] for inviting me along for the ride.”

Meanwhile, Fennell received the Dorian for Best Screenplay. She is also up for the Best Original Screenplay Oscar and, along with Zhao, is nominated in the Best Director race as well. It’s the first time in history that more than one woman has been recognized in the category.

Among the Dorians’ other winners are “Ma Rainey’s Black Bottom,” “The Forty-Year-Old Version,” and “Minari’s” Yuh-Jung Youn. The former was named Best LGBTQ Film, while Youn won Best Film Performance – Supporting Actress. She is up for a Best Supporting Actress Oscar as well. The story of a playwright reinventing herself as a rapper, “The Forty-Year-Old Version” received the Best Unsung Film prize and writer-director Radha Blank took home the “We’re Wilde About You!” Rising Star Award.

Trans actress and filmmaker Isabel Sandoval was honored with the GALECA Trailblazer Award for “creating art that inspires empathy, truth, and equity.” Her third feature “Lingua Franca,” the tale of an undocumented trans immigrant facing an uncertain future, was released last year.

Head over to Revry.tv to watch the Dorians Film Toast 2021. The full list of winners is available at The Hollywood Reporter.