Not One But Two Celebs Go Home On ’90s Night – Deadline 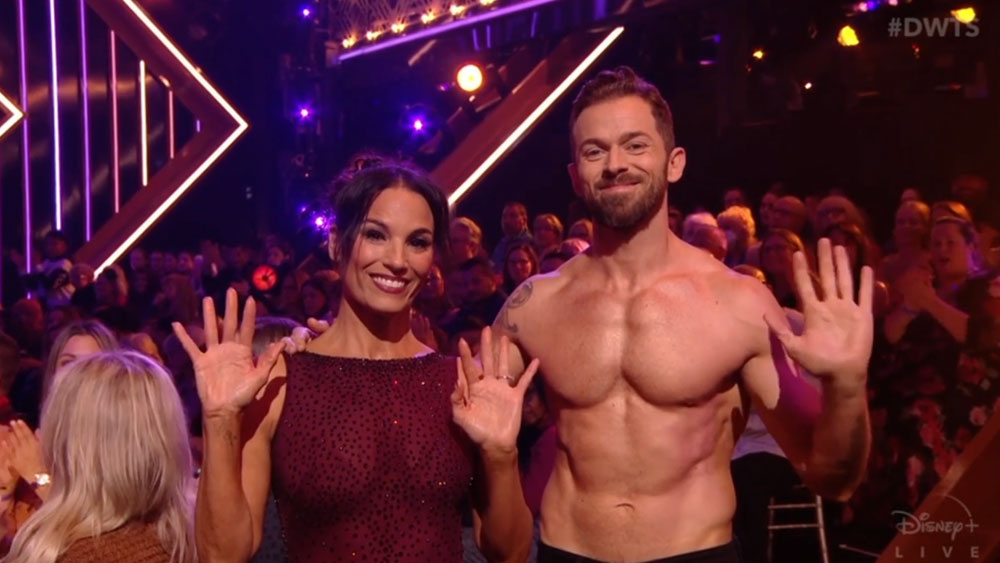 It’s ’90s night and since we’re down to only eight teams, someone’s gotta help fill those two hours of programming. Welcome En Vogue and Salt N’ Pepa to the ballroom! It was a treat to watch Len Goodman groove out to your performance of “Whatta Man” at the top of the show.

After a super quick tribute to the late Aaron Carter — the DWTS contestant from season 9 died Nov. 5 — the night of hot shirtless men — and a double elimination — began!

Vinny Guadagnino and Koko Iwasaki. I can’t be the only one who wonders why the Jersey Shore star is still in this competition. At least he’s not squandering the opportunity; he tries to inject his personality into his middling numbers, including with tonight’s tolerable tango to “What is Love.” “You tried to do everything absolutely right,” said Bruno Tonioli. “You were right there with your frame. The thing is, my darling, the tango should always be one level. You should never skip. You glide through it.” Score: 29 out of 40

Trevor Donovan and Emma Slater. The duo assumed the role of Barbie and Ken for their salsa to “Barbie Girl” that included lots of ab-tastic lifts and spins. (What can I say? Donovan’s well-defined chest and personalized pair of briefs deserve their own set of 10s). “That was a great way to start ’90s night,” said Carrie Ann Inaba. “The Barbie part you nailed, it made me laugh. Once we got into the dance, you were a little skippy at times. Smooth it out. Just a little too tense at times.” Score: 34 out of 40

Shangela and Gleb Savchenko. Shangela regaled her partner with ’90s memories from college in Dallas, when she attended her first gay club and “started to love who I was.” So they brought the club scene to center stage, with Shangela donning a heap of neon tassels for her exuberant samba. “You crushed the crowd. The crowd appeal is off the charts,” said Derek Hough. “The footwork is still a little sloppy in places. But listen up, I’m not taking anything away from that incredible, amazing samba.” Score: 37 out of 40

Heidi D’Amelio and Artem Chigvintsev. The reality star is definitely done with the judges telling her she needs more emotion. She adores dancing alongside her far more talented daughter, but she realizes her number is up and can’t help but burst into tears during rehearsal. Chigvintsev urged her to channel that sentiment into their contemporary dance to Alanis Morissette’s “Ironic.” And she did, but it didn’t work for Goodman (who seemed far more impressed with Chigvintsev’s chiseled torso. For more information, see above). “Heidi, it doesn’t suit your personality,” he said. “You’re far more outgoing. I thought this was more introverted.” Score: 35 out of 40

Daniel Durant and Britt Stewart. The CODA actor shared a heartfelt story about how he was adopted at 18 months old after his drug-using, deaf mom abandoned him at a friends house. He finally met her after high school but they never developed a deep relationship because she died from cancer. Yeah I know, what does that have to do with dancing jazz to a ’90s tune? Nothing, really; but I got chills when the music stopped midway through the performance and the duo quietly boogied to a hushed ballroom. As Hough said, it was “insanely powerful.” “I want you to know that you are saving so many people out there and sharing your experience and teaching us what it is like to be deaf,” added Inaba. Score: 39 out of 40

Wayne Brady and Witney Carson. The game show host remembered how he launched Whose Line Is It Anyway? in 1999 for ABC — ironic, since we just learned this weekend that the show will end next season. Still working with a “bum knee and a hurt back,” Brady’s salsa was impeccable and definitely played to his strengths. “When you get into the groove, you are unstoppable,” said Tonioli. “Rhythm, fluidity, change of pace, relationship to your partner….makes you the ultimate, consummate performer.” Score: Perfect 40

Gabby Windey and Val Chmerkovskiy. The bachelorette is tough to root for; her temperature always seems to run low in the rehearsal packages and she never seems that enthusiastic about how far she’s gotten in the competition. But boy does Windey come alive when she takes center stage in her feather boa skirt. She owned that samba to Ricky Martin’s “Livin’ La Vida Loca.” “You’re a sales woman,” said Hough. “Every time you sell it, it’s brilliant!” Score: Perfect 40

Charli D’Amelio and Mark Ballas. The frontrunner performed a tango. Want to guess how she did? “I want you to know if you were a painting, you are a Picasso,” said Inaba. “That was beyond anything I have ever witnessed on this dance floor … a masterpiece.” “My darling it was like watching two predators at the top of their game,” added Tonioli. “You never really knew who was going to come out of top. The quality of movement ..this is it. This is it!” Score: Perfect 40

Second round! The relay dances.

Shangela and Gleb Savchenko vs Daniel Durant and Britt Stewart. The challenge was to perform a cha-cha to Vanilla Ice’s “Ice Ice Baby.” (Yes, he was in the house and performing live). Shangela performed first, but seemed a beat behind. Durant, however, was positively adorable and kept to the beat (even his squishy face is a treat to watch). But Goodman gave Shangela the 5 bonus points. Boo!

Vinny Guadagnino and Koko Iwasaki vs Trevor Donovan and Emma Slater. The couples had to perform a samba to En Vogue’s live performance of “My Lovin, You’re Never Gonna Get it.” Guadagnino looked stiff though he loosened up with his white-man-head-bounce; Donovan (shirtless once again) wasn’t much better but he sure remembered to bounce! Inaba struggled with her decision, but ultimately awarded the 5 bonus points to Donovan.

Heidi D’Amelio and Artem Chigvintsev vs. Wayne Brady and Witney Carson. Tonioli assigned them a samba to another live performance by Salt n’ Pepa. D’Amelio caught the beat but missed a few moves at the end. Brady, who not-so-humbly referred to himself as a “world class performer” during rehearsal, had this one in the bag. 5 bonus points to Brady.

Charli D’Amelio and Mark Ballas vs. Gabby Windey and Val Chmerkovskiy. Hough tasked the couples with a salsa to “Ain’t Gonna Hurt Nobody” performed live by Kid N’ Play. D’Amelio was perfection — it’s good to be young and nimble – but Windey was just as wonderful with an extra credit lift and spin. Both deserved the extra points, but Hough awarded them to D’Amelio.

Bottom three were Guadagnino/Iwasaki, D’Amelio/Chigvintsev and Donovan/Slater. D’Amelio was dropped first; she was at the bottom of the leaderboard and the judges weren’t allowed to save her. All the judges saved Donovan so Guadagnino was the next to go, finally. (Justice for Jordin Sparks!)

Next week are semi-finals.