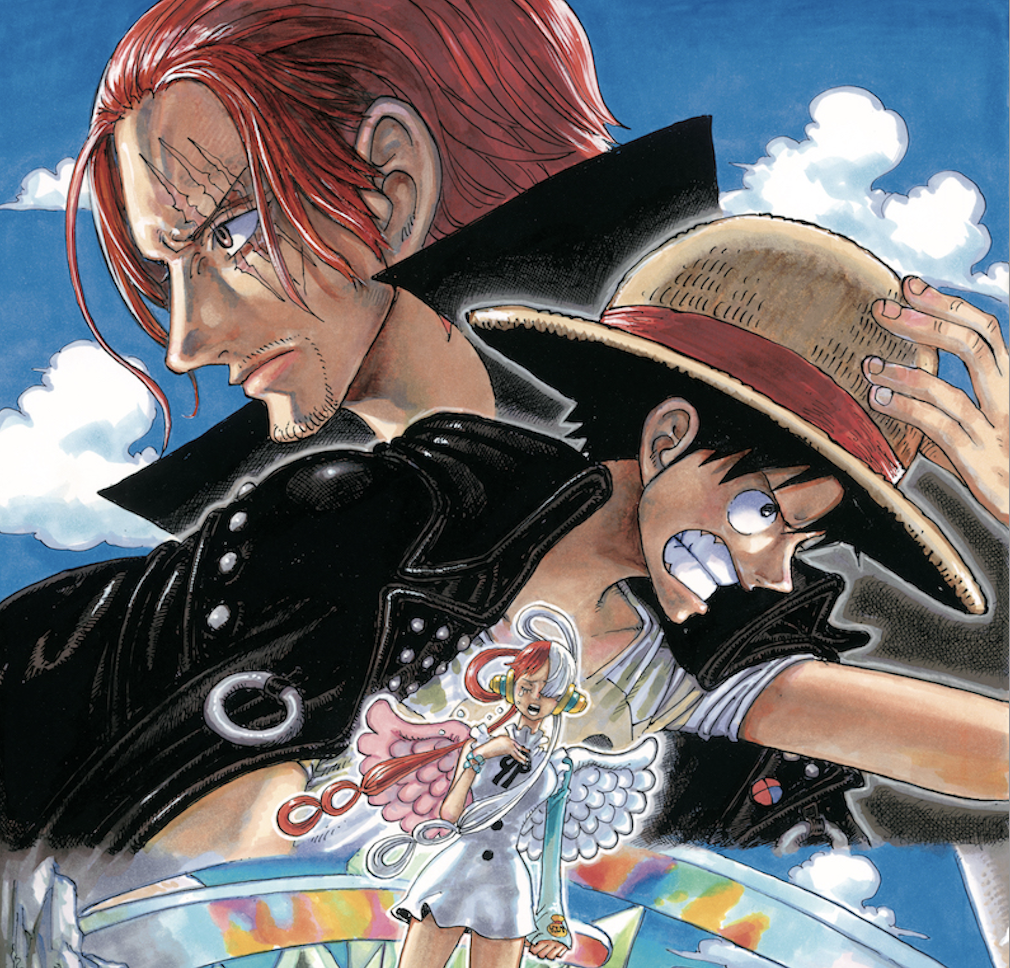 As a movie tie-in, it takes some beating. One Piece Film Red has been released as the manga comic strip on which it is based celebrates 25 years of existence and its 1000th published episode, every one of which has been authored by Eiichiro Oda, executive producer of the new film.  Think about that. There are people who have grown up with One Piece which has also run as a weekly television series since 1999 — and there have been 14 films in the franchise before this one.

That adds up to a tremendous number of characters with bizarre back stories – and many millions of fans, not all of them in Japan. One Piece Film Red has topped the Japanese box office for 12 weeks, is the biggest movie of 2022 there and just opened at number two in North America.

Outside Japan, it is being promoted as a gateway experience for the uninitiated because it is a stand-alone story. I’m not sure about that. If you’re a newcomer, as I am, you can’t possibly catch up on a thousand episodes of regular characters – many of whom appear here, sometimes only for nanosecond –  and dense mythologies. Just accept this barrage of images barreling out of the screen at breakneck speed for the anime-tastic thing that it is. Top tip: it may help to close your eyes every now and again.

A brief but helpful prologue tells us that we are plunging into a world dominated by pirates: adventurers on the high seas looking for a legendary treasure and doing a lot of sword-fighting and general swashbuckling along the way.

Aficionados know that the series revolves around youthful sea captain Monkey D. Luffy and his Straw Hat People, who are nice pirates, but there is also a significant minority that rejoices in plundering the poor, leaving people starving, penniless and sometimes dead. The high seas are patrolled by an arm of the World Government simply called the Navy, which is utterly ineffectual as a law-keeping force but feared almost as much as the pirate raiders.

This film centers on Uta, a new character, who is a megastar singer. During two years of fame, she has kept her identity a secret, broadcasting to the world from the lonely island of Elegia via the miracle of video transponder snails (yes, snails). Now she is giving her first stadium gig to a deliriously waiting world;  even a few mer-people wiggle fishily out of the sea to come and see her. Also in attendance are Luffy and his crew, Luffy surprising everyone – including Uta – by storming the stage. It takes her a moment to recognize him. They were childhood playmates under the watchful eye of Shanks, a rock-star pirate who was Monkey’s mentor and – as is revealed here and now, to the astonishment of her fans – Uta’s estranged father.

Luffy is not the only stage invader. Four separate lots of piratical abductors (I think: counting is challenging) try to kidnap Uta during her first upbeat number “If I change the world.” They soon find out that the cutie with the soaring voice and two-tone hair is not so easily snaffled. Because Uta’s goal is, in fact, to change the world, using the siren power of her voice to lull and lure her fans into a dream dimension where there will be no pirates and no bad people and nobody will work or study, just play games and eat their favorite foods all day. Effectively, their souls – or avatars, perhaps – will be separated from the bodies they leave behind as husks in the real world. As long as she keeps singing, they can never get back. They won’t even know they don’t really exist any more. “The new era is going to be great!,” she beams.

There is the sketch of a philosophical argument in here about the ethics of managing other people’s happiness, but manga is not the place to develop it. Even the story doesn’t so much develop as tumble, frame by giddying frame, through a cavalcade of events propelled by Uta’s songs – voiced by Ado, a pseudonymous J-pop singer who also maintains anonymity in the real world – and Goro Taniguchi’s hyper-caffeinated direction. Toei Animation’s work is often rough and, appropriately, looks assembled at speed:  One Piece is not exquisite, in the manner of Studio Ghibli, although the fans say the quality here is much better than in the series.

It is, however, fantastically energetic. Unlike western studio animation, this kind of manga is so hog-wild it can keep cutting loose from the spatial conventions of the physical world and the drawn equivalents of film’s zooms, pans and reaction shots. Close-ups of different people are cut together any old how; characters change appearance before our very eyes; images spin, flash and multiply, sometimes exploding into abstract showers of color and light. In a way, this is another sort of realism: the visual pile-up makes the concert feel thrilling in the way being at a great concert actually does, while the fights are truly breathless and urgent. It’s hard to tell who is on which side, but that’s not unrealistic either. OK, it’s beyond comprehension – for me, anyway.  But what a ride. Really, it’s a ride.