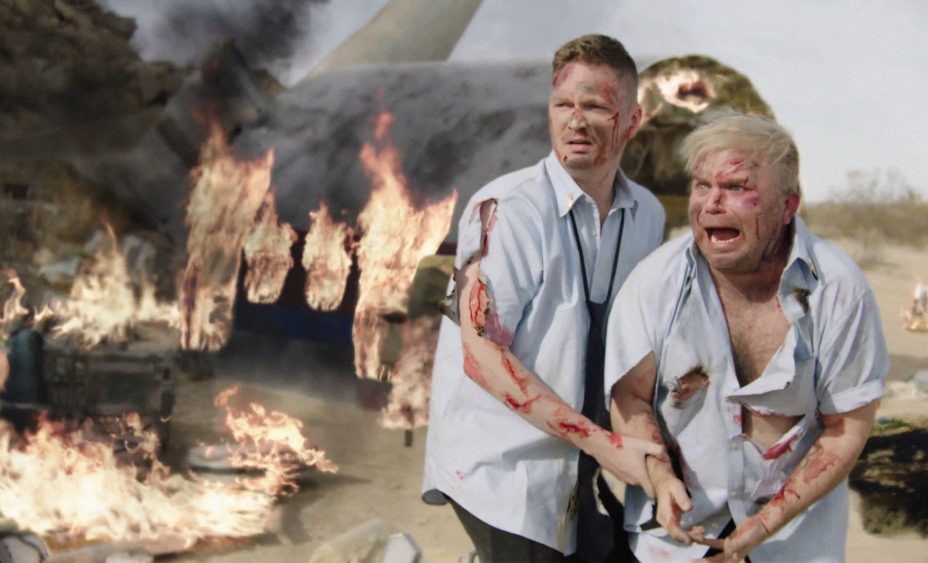 If a crisis erupts on board a commercial aircraft, you want to know the flight attendants are prepared to handle any desperate situation. Chris, Wes, and Clear, the cabin crew in the comedic short Cock N’ Bull 3, are not those guys. They’re more likely to be the cause of an emergency than the ones resolving it.

Wes (Danny Rhodes) provides a running stream of non-FAA approved commentary over the PA system. Chris (Nathan Adloff) locks eyes with an older man within minutes of takeoff. Later, he tumbles out of the forward lavatory with his shirt off, apparently having just joined the Mile High Club with his gentleman friend. Clear (Pete Zias) declares, “I wanna get fucked in there!”

Things only get more chaotic on the ill-fated red eye from L.A. to New York, after the pilot mysteriously becomes incapacitated. Cock N’ Bull 3, directed by Adloff and co-written by Adloff and Rhodes, held its world premiere Friday night at the Outfest LGBTQ+ film festival in Los Angeles, playing ahead of the narrative feature God Save the Queens.

The creative partnership between Adloff and Rhodes dates back to the first Cock N’ Bull short, released in 2012. Their characters, Chris and Wes, appear in all three of the films, with a regular cast of performers, including Drew Droege, Joy Nash, and Verton R. Banks, returning in different roles.

“This series is sort of like an anthology,” Adloff explains. “Cock N’ Bull 3 is technically a prequel.” Adds Rhodes, “Each film is standalone, but it’s always Wes and Chris. On the first Cock N’ Bull, they’re best friends and my character Wes has just gone through a breakup. And the second one, we’re a troubled couple that decides to open up their relationship, having other people sexually involved with them to kind of get them through a dry spell in their relationship. And then in the third one, we’re meeting for the first time as flight attendants.”

Each installment of Cock N’ Bull has played at Outfest. The series began modestly.

“We started Cock N’ Bull 1 with like a $150 budget,” notes Rhodes. Says Adloff, “We made the first one in four hours in our friend’s apartment in Chicago. And it was just the two of us, our D.P. Brian [Levin]… and our friend Beverly [Sowa] doing sound. The boom pole was like a painter’s pole with a microphone duct-taped to the end. We really only spent money on, like, sushi and a couple props, and it was just us prank calling people in this apartment.”

Their budget and creative vision have expanded substantially for Cock N’ Bull 3.

“We picked an airplane because we wanted to outdo the last Cock N’ Bull, and we were just thinking, what is attainable but also like feels like a high production value, like a big movie?” Adloff says. “We found this great set that we could afford. And then when researching the airplane sets, this crash set showed up on Google that’s two hours north of L.A., and I’m like, well, we have to write where we crash the plane.”

Setting the latest film on an airplane opened up other possibilities for the creators.

“We wanted a scene where a bigger cast could be too, and the more players we could have,” Rhodes says. “We were thinking of scenarios where there could be a lot of people in a small space. [In Cock N’ Bull 2] we opened up Wes and Chris’s apartment to these ‘hookups’ that were coming in. And then we kind of wanted to build from there.”

“A lot of the [Cock N’ Bull films] are improvised,” Rhodes says. “[Samantha] ran with it, so did everyone one. So did Jim O’Heir, so did Kevin Chamberlin. All of them. They were like, ‘We’re up for anything.’”

On this flight, the seats are filled with an eclectic bunch, some of them perhaps neurotic, seeking romance, free drinks, a chance to make a cameo on the PA system, or in the case of two commiserating passengers, reassurance they haven’t been joined on board by a murderer.

Banks’s character consults his phone, then informs his row-mate played by Nash, “A flight attendant was found dead at LAX in a dumpster. And she was supposed to be on this flight… She was naked!” Scandalized, Nash’s character exclaims, “Ohh! What the hell happened?”

“Nathan and I have this very oddball kind of dark sense of humor,” Rhodes observes. Over the course of their decade-long collaboration, they have developed a shorthand on set.

“Nathan allows me to call him a bitch only once. No, I’m kidding, I’m kidding,” Rhodes insists. “I think it’s one of those things that speaks strongly to our friendship. We’re like brothers… We have an open dialogue too. I know I can come to him and be like, ‘Hey, do you think we can push this a little further?’ And he’s very open to that when we’re working together. And then I also know when to shut that down and just let him direct.”

“I have a very ‘it takes a village mentality’ when making any movie,” Adloff says, “whether it’s improvised or scripted, where the best idea wins and there’s no one that can’t chime in and give a suggestion. I encourage that before we start shooting. Those times when you try things that someone else suggests, that’s a lot of times when the magic happens.”

The first two installments of Cock N’ Bull are available on demand through Dekkoo, Amazon Prime and Revry. Cock N’ Bull 3, meanwhile, will continue to play the festival circuit for the time being before eventually becoming available on VOD. Adloff and Rhodes tell Deadline they are considering ways to further expand the anthology going forward. They’ve come a long way with it since 2012.

“When we made the first one, we had zero plans of doing another one,” Adloff says. “I think it was because of the success it had at Outfest, and it played all over the world for a year. So we were like, well, we have to do another one.”