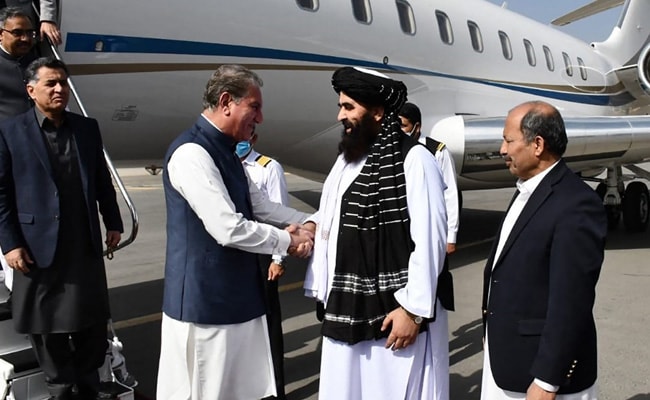 The high-level talks came as the Taliban were confronted with a new crisis just over nine weeks into their rule, as an explosion brought down electric lines and cut off power to the capital Kabul, home to 4.6 million.

The Taliban overthrew Afghanistan’s former US-backed government in August and have since been trying to win backing and financial support for their Islamist regime.

But there has also been friction between the neighbours in the first months of the new Afghan government, notably over air links and control of freight crossing the border.

“As a neighbour and as a well wisher and friend, I conveyed to them what sort of steps they could take to enhance their international acceptability,” Mr Qureshi said after returning to Islamabad.

Mr Qureshi, who was joined by Pakistan’s intelligence chief, said he met with the Taliban’s acting prime minister Hasan Akhund and most cabinet members during his brief visit to Kabul on Thursday.

They discussed forming a broader based government, respecting women’s rights and girls’ need for education and clamping down on international terrorist organisations, Mr Qureshi said.

“If they show fair progress on these issues, the stage for recognition would become easier for them,” he said at a press conference, adding that the “environment is getting better” for recognition.

Shortly before the meeting, the Taliban’s attitude to international norms was put under even more intense scrutiny when its armed fighters punched and kicked journalists covering a women’s rights protest.

A group of around 20 women was allowed to march through central Kabul for an hour and a half, but an international photojournalist covering the event was struck by a rifle butt and insulted.

At least two more journalists were struck, but there were no arrests. The women demanded access to jobs and education, which have been severely curtailed since the Taliban takeover.

Pakistan, one of only three countries that recognised the previous Taliban regime in the 1990s, is seen as still wielding considerable influence over the group as it returns to power.

Lorry loads of Afghan fruit were left to rot at the southern border in Afghanistan’s Spin Boldak in recent weeks, after the two nations repeatedly locked horns over Pakistan’s tightening of access for Afghans.

Mr Qureshi said a more liberal visa system for trade and for Afghans — thousands of whom cross daily between the two countries — would be introduced.

He added that a Taliban delegation would soon make a follow-up visit to Pakistan.

Pakistan has long faced US allegations that its intelligence service supported Afghanistan’s Islamist insurgents in their two-decade battle against NATO forces and the now-deposed Western-backed government.

Mr Qureshi is the third foreign minister after those of Qatar and Uzbekistan to visit Afghanistan since the Taliban took power in mid-August.

On Wednesday the Russian government hosted a high-level Taliban delegation and officials from 10 countries, including China and Pakistan.

Russia pushed the Taliban for action against extremist Islamic State fighters which it says have massed in perennially volatile Afghanistan.

In return, the new regime — which is facing economic and humanitarian crises within its borders — urged the international community to recognise their interim government.

“Isolation of Afghanistan is not in the interest of any sides. And this has been proven in the past,” the Taliban Deputy Prime Minister Abdul Salam Hanafi told the Moscow conference.

And as night fell, power was cut off to Kabul “and some other provinces” after an explosion brought down power lines, the Breshna power company said.

The cause of the blast was not immediately clear, but the Islamic State has been waging a campaign of bomb attacks to undermine the Taliban regime.