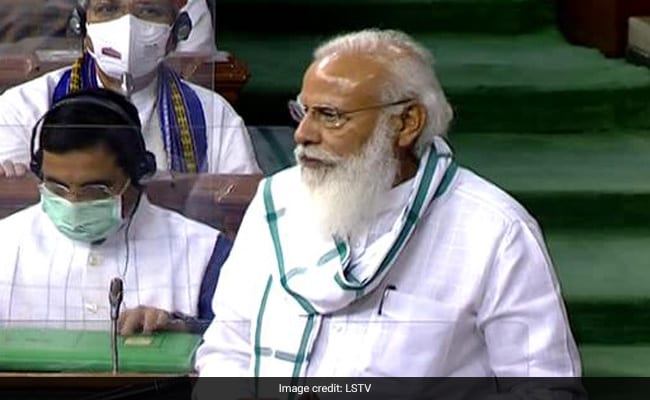 Monsoon session: PM Modi had said his traditional remarks before the start of the session

Prime Minister Narendra Modi today stopped in the middle of introducing his new ministers, interrupted repeatedly by opposition protests as the monsoon session of parliament took off on a sour note. “Please treat them as introduced,” said PM Modi, curtly.

The chaos continued until the Lok Sabha was adjourned till the afternoon.

Earlier this month, the Prime Minister added 36 new ministers to his government, in the first cabinet reshuffle of his second term in power.

“I thought that there would be enthusiasm in the parliament as so many women, Dalits and tribals have become ministers. This time our colleagues from agricultural and rural background, OBC community have been given a place in the council of ministers,” PM Modi said.

“They should have been encouraged and congratulated. Perhaps some people are not happy if the country’s women, OBCs, farmers’ sons become ministers. That is why they don’t even allow their introduction.”

As the opposition kept shouting slogans on price rise and the farmer protests, Speaker Om Birla admonished them and urged decorum. “You are bringing down the standards of parliamentary democracy, we are the largest democracy in the world,” he was heard saying.

Union Defence Minister Rajnath Singh said: “What the Congress did is extremely sad and unfortunate. PM could not even introduce his ministers.”

PM Modi had said in his traditional remarks before the start of the session that the opposition must ask tough questions but must also allow the government to answer them in parliament.

“I would like to urge all the MPs and all parties to ask the most difficult and sharpest questions in the Houses, but should also allow the government to respond in a disciplined environment,” PM Modi told reporters in the Parliament House Complex.

“This will boost the democracy, strengthen people’s trust and improve the pace of development,” he said.

The opposition has pledged to take on the government in parliament on issues ranging from the farmer protests and price rise, to the latest scandal involving allegations of journalists and politicians in India on the list of those targeted by Israeli spyware Pegasus.

It's a new day, a new beginning. It's all about starting life afresh. So as you begin a new journey, find out what...
Read more
Previous articleFord Makes Fragrance For EV Owners Who Miss The Smell Of Petrol
Next articleForeign Missions In Afghanistan Call For Taliban Ceasefire As Peace Talks Fail
LocalTakSabse Tez