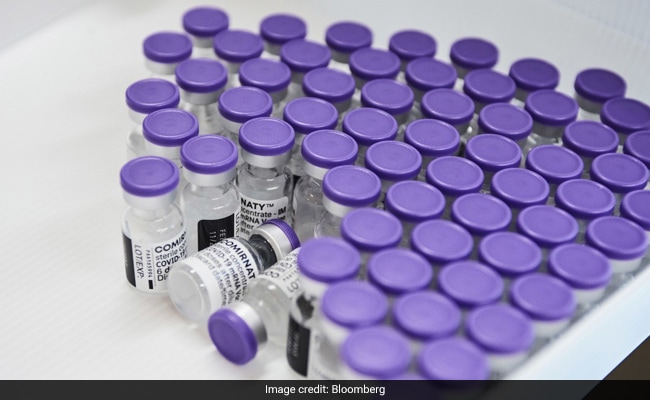 Pfizer Inc. and BioNTech SE said initial lab studies show a third dose of their Covid-19 vaccine may be needed to neutralize the omicron variant, results that will accelerate booster-shot drives around the world and may lead to use of new strain-specific vaccines.

Company researchers observed a 25-fold reduction in neutralizing antibodies that fight the variant, compared with the original strain of the virus, in people who got just two shots. However, boosting with an additional shot of the vaccine restored protection to a level similar to the initial two-dose regimen, the vaccine partners said in a statement.

The lab findings indicate that two doses of the vaccine “may not be sufficient” to protect against infection with the omicron strain, the companies said. Along with stimulating the booster push, that may increase the likelihood that an omicron-targeted shot may ultimately be required. Pfizer said this would be ready by March.

It’s very clear that the Pfizer-BioNTech shot “should be a three-dose vaccine” to deal with omicron, BioNTech Chief Executive Officer Ugur Sahin said on a conference call. It may make sense to give boosters even sooner than now recommended, as early as three months after the first two doses, he said.

In the short term, strong antibody levels induced by a third booster dose of Pfizer’s existing vaccine, branded Comirnaty, are likely to provide good protection for the next few months into the early spring, buying time to develop new shots and figure out how best to proceed, Mikael Dolsten, Pfizer’s chief scientific officer, said in an interview. Meanwhile, anecdotal reports continue to suggest that most omicron infections have been relatively mild.

What Bloomberg Intelligence Says:
“The critical question, which applies equally to the delta variant, is how long these high antibody levels last and what they mean for protection against infection and disease. Given the 25x reduction in neutralization of omicron in those vaccinated with just two doses, adding to data from two other labs that show a 40x decline, we expect protection against infection to be lost.”

Pfizer will have more data on the existing vaccine’s ability to repel the omicron variant before the end of the year, according to Chief Executive Officer Albert Bourla. The test results released Wednesday were obtained using a laboratory construct called a pseudovirus, he said in an interview on Bloomberg Television’s “Balance of Power With David Westin.” The company is still working with the real virus and collecting evidence on how the vaccine performs in community use, he said.

Yet the new results plunge the future of Covid vaccination campaigns into further uncertainty. Until recently, researchers had high hopes that a third booster dose could provide long-lasting protection against Covid and future variants. With the significant immune evasion demonstrated by omicron, that has become much less clear.

The rise of omicron “increases the likelihood that in the future there will be a shift to a variant vaccine,” Dolsten said. “Whether that will happen this spring or a year later we don’t know.”

The evolution of the virus also makes the need for annual vaccinations against Covid much more likely, he said. Whether omicron-targeted boosters are needed now still isn’t clear. It depends on whether the variant continues to spread more widely, and what other variants emerge in the next few months, Dolsten said.

Nonetheless, “we clearly see the rationale now” for preparing for a fourth dose customized to the variant in case needed at some point, Dolsten said. It’s likely that a boost will be needed every six months if the company continues distributing the current shot, Bourla said.

The companies are in talks with the U.S. Food and Drug Administration about whether human trial data would be needed for approval, Dolsten said. Another possibility, should immunity wane in the spring, would be to give a fourth dose of the existing vaccine, he said.

The partners are working to boost production capacity beyond the 4 billion doses currently planned for next year, BioNTech Chief Operating Officer Sierk Poetting said on the conference call.

“We are full steam ahead, keeping all options on the table,” Dolsten said.

Regulations around boosters differ widely by countries such as the U.K. and France, while the World Health Organization has called for fully vaccinating the most vulnerable people around the globe before administering additional shots. The U.S. recommends booster shots for all adults six months after their second dose.

“If ever there was a clarion call for people who are not vaccinated to get vaccinated and those who are vaccinated fully to get boosted,” White House medical adviser Anthony Fauci said Wednesday on a Washington Post Live webinar, “the new challenge with the omicron variant clearly is that.”

Uncertainty over vaccine efficacy against the new variant has fueled market volatility and prompted travel restrictions since omicron was identified in southern Africa last month. The S&P 500 was little changed as of 1:04 p.m. in New York. Pfizer shares were down 0.7%, while BioNTech American depositary receipts fell 3.7%.

The Pfizer-BioNTech results add to data from around the world attempting to assess the impact of omicron on vaccine protection. South African researchers found a 41-fold drop in levels of virus-blocking antibodies against omicron, compared with the strain circulating at the start of the pandemic. A German team found a 37-fold drop in antibodies against omicron versus the highly transmissible delta variant. Those results were roughly consistent with what Pfizer and BioNTech found in their own antibody study, Dolsten said.

However, a study from Stockholm’s Karolinska Institute was more optimistic, finding the decline in antibodies against omicron was only slightly worse than for delta. T cells, another virus-fighting component of the immune system, should still be able to respond to omicron. About 80% of viral features called epitopes that are recognized by T cells are unchanged in the variant, Pfizer and BioNTech said.

The companies said they’ll be watching closely to see how quickly immunity against omicron wanes over time even after a third dose.