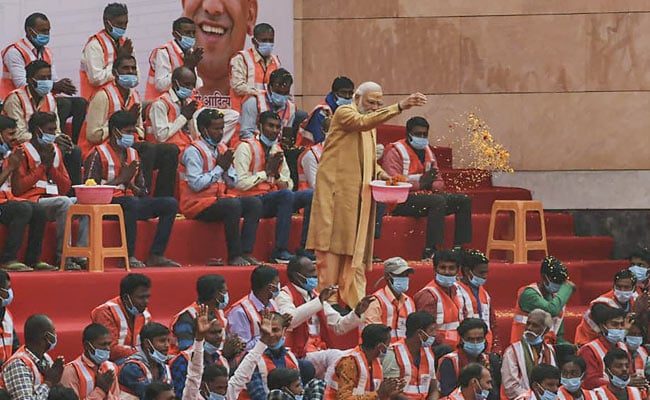 Prime Minister Narendra Modi today showed flower petals on construction workers to honour them for their role in bringing the Kashi Vishwanath Corridor project to life.

Before inaugurating phase 1 of the grand project that links the iconic Kashi Vishwanath temple with the ghats of the Ganga, the Prime Minister honoured the construction workers.

Visuals from the spot showed him showering petals on the construction workers. The workers, with their fluorescent work gear on, sat with folded hands as the Prime Minister walked among them, showering flowers.

Addressing the inauguration ceremony, the Prime Minister, “Today I want to thank all my brothers and sisters who shed their sweat in the construction of this grand complex. Despite the difficult period of the pandemic, they did not let work stop here. I have now got the opportunity to meet them and take their blessings.”

The temple corridor project is aimed at ensuring easy movement of pilgrims and devotees between the ghats and the temple. Earlier, they had to pass through congested streets to reach the temple.

The first phase of the project has been built at a cost of Rs 339 crore, is spread across an area of about 5 lakh sq feet and comprises 23 buildings.

The project, foundation stone for which was laid in 2019, will cost about Rs 800 crore overall. Over 300 properties have been acquired to implement the grand plan. About 1,400 shopkeeps, tenants and homeowners were rehabilitated, a statement from the Prime Minister’s Office said.

More than 40 ancient temples were rediscovered during the work on the project. They were restored while ensuring there is no change in the original structure, the PMO statement said.