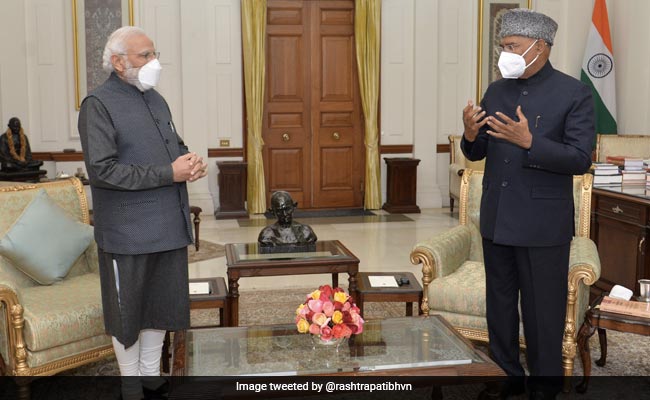 After Prime Minister Narendra Modi was stuck on a Punjab highway for 20 minutes because of protesters in a massive security breach on Wednesday, President Ramnath Kovind has expressed concern, say government sources. PM Modi met with the President on the incident, which has snowballed into a huge political row ahead of polls in Punjab and other states.

President Ram Nath Kovind met Prime Minister Narendra Modi at the Rashtrapati Bhavan today and received from him a first-hand account of the security breach in his convoy in Punjab yesterday. The President expressed his concerns about the serious lapse. pic.twitter.com/lzvAuriuGb

PM Modi was on his way to Ferozepur in Punjab for an election rally when his route was blocked by protesting farmers yesterday. He was to be flown to the rally site by a helicopter but because of bad weather, the plan turned into a two-hour drive.

As the PM’s convoy was blocked on a flyover by protesters, he was clearly seen waiting in a black Toyota Fortuner car. After 20 minutes, PM Modi turned back and headed straight to the Bathinda airport.

The Punjab government has ordered a high level probe, which will submit a report within three days.

The Supreme Court will tomorrow hear a petition that says the Punjab Chief Secretary and the Director-General of Police must be held responsible and suspended. “It has to be ensured this doesn’t happen again,” the petitioner says.

The BJP accuses Punjab’s ruling Congress of putting the Prime Minister in danger with “murderous intentions”, while several state ministers and Congress leaders say the Special Protection Group that is in charge of the PM’s security was entirely at fault.

“Repeated rejections by the people have taken them on the path of insanity. The topmost echelons of the Congress owe an apology to the people of India for what they have done,” said Union Home Minister Amit Shah.

Punjab Chief Minister Charanjit Singh Channi denied any breach and pointed at the abrupt change of plans. “He is our PM. I would lay down my life to protect him, as a Punjabi,” he said to reporters, “but he was in no danger.”

Mr Channi said though travelling by road was a joint decision, the role of the state police “was limited” and everything was handled by the SPG and other central agencies.