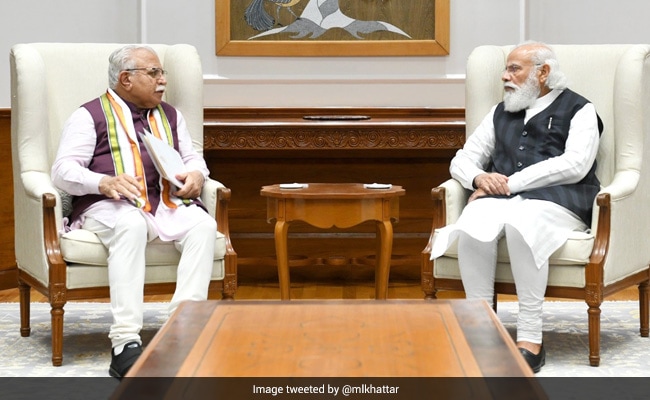 Haryana has got a honest government under Manohar Lal Khattar, the Prime Minister said.File

Prime Minister Narendra Modi was all praise for Haryana Chief Minister Manohar Lal Khattar today as he said that after many decades, the state has got a honest government that thinks about its bright future round the clock.

The Prime Minister also took a swipe at the media, saying it has not paid much attention to “constructive and positive” things. A video tweeted by the Prime Minister shows Mr Khattar first wiping his eyes and then rising up with folded hands to greet Mr Modi as he finishes his speech.

The coming years will always remember and cherish the pro-people work being done by @mlkhattar Ji and his team for the progress of Haryana. pic.twitter.com/Z4PyaPvnY7

The Prime Minister’s praise for Mr Khattar comes after his government faced criticism for its handling of the farmers’ protests and also some remarks by the Chief Minister.

In August, the Haryana government came under fire when a top district official was caught on camera asking policemen to ensure that farmers protesting against BJP leaders get “head injuries”. The Chief Minister had then said that although the officer’s “choice of words” was not correct, “strictness had to be maintained”.

More recently, the Chief Minister told members of the BJP’s farmers’ to raise armed groups and follow a “tit for tat” policy to deal with farmers’ protest.

“In the north and west Haryana, farmers should raise armed groups… Raise volunteer groups of 500-700-1000 people and pick up sticks and then follow a ‘tit for tat’ policy,” he had said. After drawing flak, he withdrew his remark and said he does not want to encourage any clash in the society.

Haryana has seen a high number of police crackdowns against farmers protesting against the centre’s new farm laws over the past one year.

Amid the criticism of the state’s handling of the protests, there was speculation that Mr Khattar may be replaced as Chief Minister as the BJP changed Chief Ministers in four states in the past seven months.

Against this backdrop, the Prime Minister’s praise for Mr Khattar will bring him some relief .

The Prime Minister was speaking at the inauguration of a rest house in the National Cancer Institute at the Jhajjar campus of AIIMS, New Delhi.

The 806-bed facility has been constructed by the Infosys Foundation as part of its Corporate Social Responsibility initiative.

The Prime Minister addressed the event over video conferencing. While Mr Khattar and other officials were present at the event in person, Union Health Minister Mansukh Mandaviya and Infosys Foundation chairperson Sudha Murthy attended it virtually.

“I have been fortunate that I got an opportunity to work in Haryana for a long period. I have seen many governments closely. But after many decades, Haryana has got a purely honest government under the leadership of Manohar Lal Khattar ji which thinks for the bright future of Haryana all the time,” the Prime Minister said.

“I know that the media has not paid much attention to such constructive and positive issues, but whenever the performance of the governments in Haryana is evaluated, the present government will emerge as the best in the last five decades for its innovative and far-reaching decisions,” he added.