Polls Close In Georgia, Florida, Virginia and Other States – Deadline 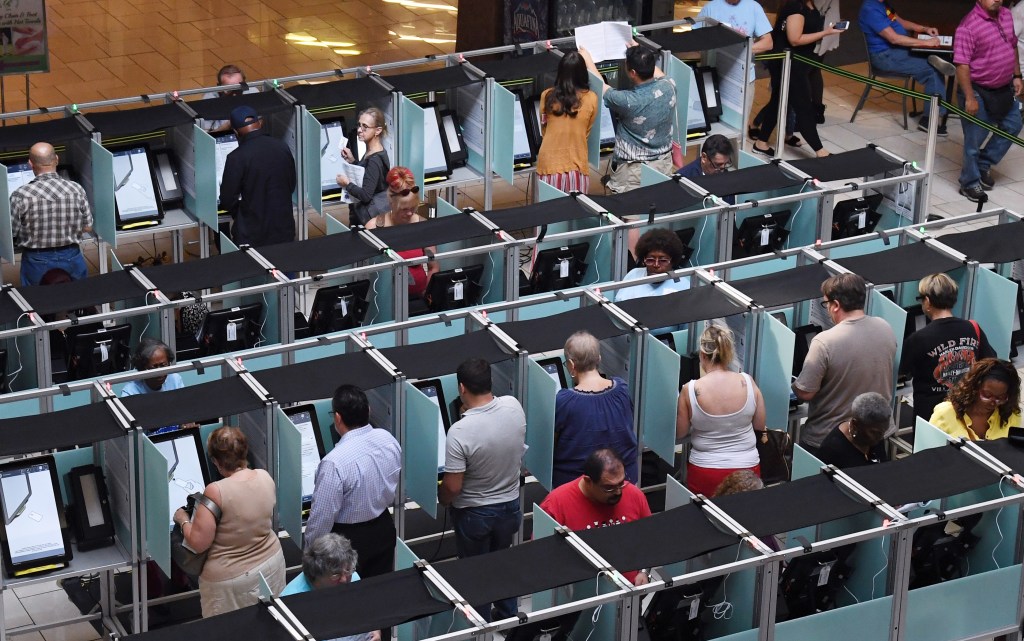 UPDATE, 4 PM PT: Polls have now closed in Florida, Georgia, New Hampshire, South Carolina, Vermont and Virginia, which should unleash a wave of initial results and perhaps an indication of Republican and Democratic prospects.

The closest watch race among the states is between Sen. Raphael Warnock (D-GA) and Republican Herschel Walker in Georgia, although there is the possibility that the race will end up in a Dec. 6 runoff if no candidate obtains a majority. Democrat Stacey Abrams is in a rematch with Gov. Brian Kemp, a Republican, who has led in the polls.

PREVIOUSLY: Months of punditry, analysis and polling will give way tonight to actual midterm results, as Republicans seek to regain control of the House and the Senate, Democratic gubernatorial candidates seek to defeat Donald Trump-endorsed election deniers and Los Angeles decides a hotly contested mayor’s race.

Inflation and abortion were nearly tied among the issues voters cited as the most important to their vote, according to initial exit poll data provided to news outlets from Edison Research/NEP.

Broadcast and cable networks see this is perhaps the most important night of the year, hoping to win back audiences that tuned out once Trump exited the White House.

The former president and former Celebrity Apprentice host is not on the ballot but will be a presence in coverage. In an interview with NewsNation set to run this evening, Trump was asked about about all the candidates he endorsed this cycle. He said, with a bit of a smirk, “Well, I think if they win I should get all the credit, and if they lose, I should not be blamed at all.”

The focus on 2024 has already started, with Trump, reportedly expected to soon announce another presidential bid, told NewsNation that he thought Florida governor Ron DeSantis “could have been more gracious” after he endorsed him for his statewide race back in 2018. DeSantis, who has been leading in the polls for his own reelection, is viewed as perhaps Trump’s strongest challenger for the GOP nomination if he ultimately decides to run. Last weekend, Trump even referred to DeSantis as “Ron DeSanctimonious.”

Networks spent much of the day attuned to any reports of troubles at the polls, as well as concerns of election violence. Those concerns increased following the attack on Paul Pelosi, the husband of House Speaker Nancy Pelosi, last month.

Democrats, led by President Joe Biden, also have been warning that no less than democracy is at stake in the midterm races, as a number of 2020 election deniers are on statewide ballots, potentially giving them some authority over the vote count in the next presidential election.

Given what happened in the last election cycle, with Trump advancing false claims that the presidency was stolen from him, there also will be scrutiny of the way that networks call election results. Arnon Mishkin, who is again leading the Fox News Decision Desk, explained the process to anchor Martha MacCallum while offering his latest assessment.

“My gut has been sort of leaning in in the red direction,” Mishkin said. “On the other hand, there are a couple of sort of last minute stuff signs you see that say not so fast. Some of these numbers are a little there’s a little more strength to the Democrats than we thought. And so I’m somewhere in the range between it could be a very good night for the Republicans to a surprising night, at least in some ways for the Democrats.”

All 435 House seats and 35 U.S. Senate seats are on the ballot, with Democrats holding the a slim majority in the former and a one vote edge in the latter, with Vice President Kamala Harris casting tie-breaking votes.

Perhaps the most closely watched Senate race is in Pennsylvania, where the state’s Democratic lieutenant governor John Fetterman is facing Republican celebrity doctor Mehmet Oz. Fetterman’s campaign was hoping for a boost from a late endorsement from Oprah Winfrey, who was largely responsible for giving Oz his career break, while Oz has capitalized on his support from mainstream Republicans and from Trump. Their race is far and away the most expensive of all, with almost $374 million spent, according to the Center for Responsive Politics.

In Georgia, Sen. Raphael Warnock (D-GA) is facing a tough challenge from another celebrity candidate, former football pro Herschel Walker. That race has been dominated by headlines about Walker, avidly anti-abortion, having allegedly paid for a girlfriend to abort her pregnancy. He denies the claim. The story also appears not to have sunk his campaign, as polls still show the race tight. About $271 million has been spent between the candidates, according to CRP.

Warnock wrote on Twitter this afternoon, “C’mon folks, I can’t have Herschel Walker representing my mama.”

Other Senate races that have also drawn extensive interest — and money — from entertainment industry donors include the contest in Arizona, where Sen. Mark Kelly (D-AZ) is facing off against Trump-endorsed Blake Masters; Wisconsin, where Lieutenant Governor Mandela Barnes is trying to unseat Sen. Ron Johnson (R-WI); and Ohio, where Rep. Tim Ryan (D-OH) is vying for an open seat against author J.D. Vance.

All told, entertainment industry donors have donated $36.4 million to federal candidates, surpassing the amount shelled out in the 2018 midterms, when Democrats, fueled by anti-Trump fervor, were seeking to win back the House, which they did.

Also on the ballot are 36 gubernatorial races, including in New York, where the state’s governor, Kathy Hochul, a Democrat, is seeking election to a first term against Rep. Lee Zeldin (R-NY). Hochul, who ascended to the governorship after Andrew Cuomo’s resignation last year, looked to be on a clear path to victory, but polls show the race having tightened substantially this fall, with Zeldin, like many Republicans, hammering her on issues like crime.

Former White House Press Secretary Sarah Huckabee Sanders is expected to win her race for Arkansas governor against Democrat Chris Jones. Sanders would take the office once occupied by her father, Mike Huckabee, and she also would be the first former press secretary to ascend to a statewide office since Pierre Salinger was appointed a U.S. senator from California in 1964.

California’s gubernatorial race has been a non-event, with polls showing Gavin Newsom with a wide lead over Brian Dahle.

The race drawing the most attention is that for Los Angeles mayor, as Rep. Karen Bass (D-CA), with the backing of Biden and former President Barack Obama, as well as a long list of Democratic leaders, faces a close race against real estate developer Rick Caruso, who has reportedly been on track to surpass $100 million in campaign spending. Their race has split the entertainment community, with Jeffrey Katzenberg helping to bankroll an independent committee supporting Bass, and Netflix’s Ted Sarandos taking out an open letter ad in The Hollywood Reporter to explain his backing for Caruso.

Another race drawing extensive attention from the industry is that for Los Angeles sheriff, as controversial incumbent Alex Villanueva faces Robert Luna.

Not to be forgotten is the race for mayor of Ojai, where Anson Williams, the director and producer and former Happy Days star, is seeking to unseat incumbent Betsy Stix.