Pragya Thakur Gets Covid Shot At Home, Congress Says Not Even PM… 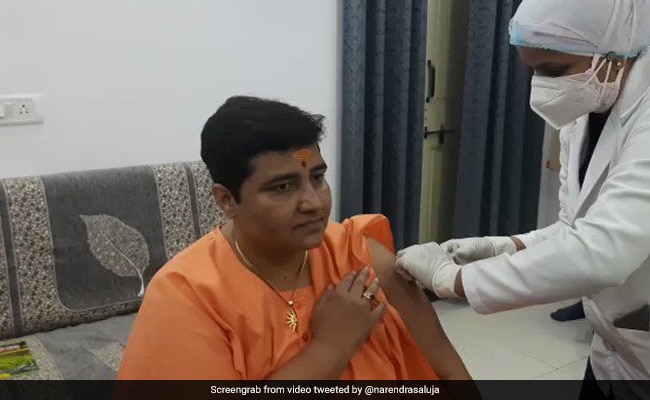 BJP MP Pragya Thakur is seen in a video receiving the Covid shot.

BJP MP Pragya Thakur is engulfed in a new controversy over her vaccination at home this week. The Bhopal MP is seen in a video receiving the jab, which was later revealed to be her first dose.

According to the state administration, Pragya Thakur was entitled to home vaccination under special rules for the “elderly and the disabled”.

“It is as per the policy, elderly and disabled will be vaccinated near to their homes, so rules were not violated in giving her the first dose of vaccine,” Santosh Shukla, state immunisation officer, told NDTV.

But the opposition Congress has criticised Pragya Thakur for seizing such a concession after videos showed her playing basketball and dancing at a wedding.

“Our Bhopal MP Pragya Thakur, who was only a few days ago playing basketball and dancing to the beats of a dhol, had a team over to her house to vaccinate her? When all BJP leaders, from Prime Minister Narendra Modi to Chief Minister Shivraj Chouhan, went to hospitals for their shot, why the exception for her,” questioned Congress spokesperson Narendra Saluja in a tweet.

The visuals contrast sharply with long queues at vaccination centres in Madhya Pradesh.

Pragya Thakur, 51, is out on bail in the Malegaon blasts case on medical grounds and has begged off several court hearings citing her health. Her critics say her recent videos belie her claim.

Last month, she was seen shooting hoops at a basketball court in the Bhopal stadium.

More recently, the saffron-robed MP was seen dancing at a wedding she helped organize at her own home.

Pragya Thakur was in jail for nine years in the 2008 Malegaon blasts case before being granted bail in 2017.

Six people were killed and over 100 others injured when an explosive device strapped on a motorcycle went off near a mosque in Malegaon, a town about 200 km from Mumbai in north Maharashtra.

In January, a court in Mumbai granted her exemption from physical appearance after she requested it on medical grounds.