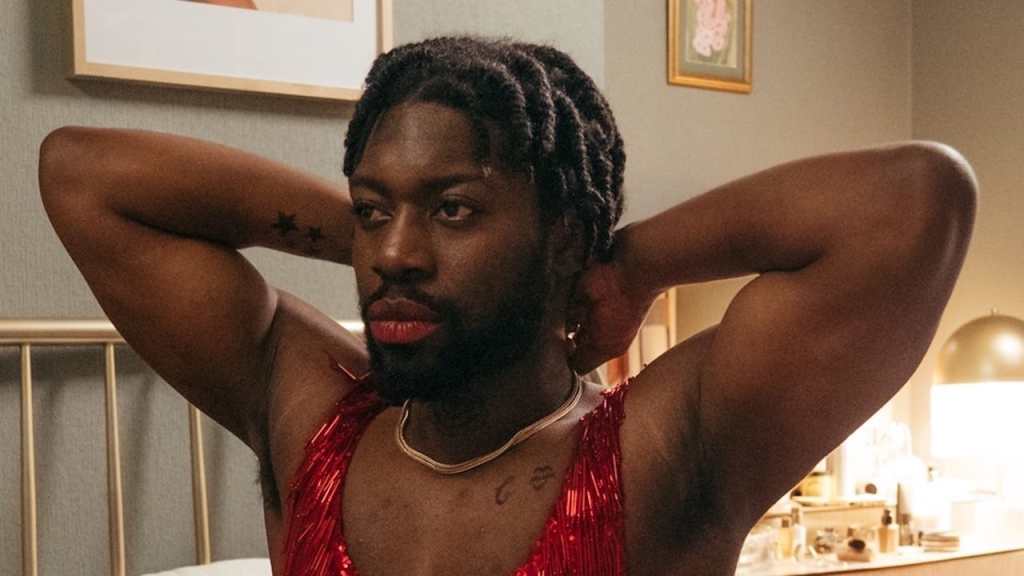 An elaborately beaded red shimmy dress becomes a talisman of beauty, truth and freedom in Dionne Edwards’ debut feature, BFI London Film Festival premiere Pretty Red Dress, a vivid portrait of a family with at least one too many secrets lurking in the closet along with that alluring frock.

Candice, (Alexandra Burke) a thirtysomething supermarket check-out girl with a big voice and big theatrical ambitions, believes it will help turn her into Tina Turner; it is her chief prop at her successive auditions for a forthcoming musical. But for her bad-boy partner Travis, (Natey Jones, throwing everything into a bravura performance) slipping his tattooed torso into that dress when nobody else is at home makes him feel at last like his real, whole self. It is a self that is equal parts lipstick and beard, heels and muscles. It is also a self he can’t show to anyone.

Travis has just come out of prison. Some pretty unsavory characters hail his return when he walks down the high street in London’s Brixton, assuring him there is still a job for him in the local drug trade if he wants it. We see him fight: he knows what he’s doing, to the extent that he could probably kill someone if his anger ran away with him. And, for all that he clearly feels sexualized when he puts on Candice’s dress, it doesn’t occur to him to try to have sex with men. He isn’t gay. As his 14-year-old daughter Kenisha (Temilola Olatunbosun) puts it, he’s just a bit off-key.

So is she, she reassures him with the moral certainty only adolescents can feel; Olatunbosun, a brilliant street casting, manifests the many moods of a teenager with great aplomb. Kenisha’s chief passion is her classmate Cicely. Nobody her age feels entirely comfortable in his or her own skin, but she does know she is the one person in the house who wants never to wear that or any other dress. Much to her mother’s bafflement, she defines herself against it.

Director Edwards frames her story with music: mostly singalong numbers we know and love, with the effervescent Burke belting out “Proud Mary” and “River Deep, Mountain High” – yeah, yeah, yeah – as if her life depended on it as much as Tina’s did. That swinging Motown sound is intended to ensure that the mood stays up, even when Travis’ yearnings inevitably explode, Kenisha faces permanent expulsion from school and a loud argument after a disastrous family party ends up with Candice’s arrest. Dressing up is fun, after all;  Edwards says she wanted an audience to emerge feeling exhilarated.

That isn’t exactly how it works, however. Pretty Red Dress is neither comfortable viewing – because at every turn, it is clear that nobody here will ever live comfortably with Travis’ kink – nor as energizing as its musical interludes are intended to be.

Much of the film is shot hand-held, the camera following the family members around their small flat or into their various workplaces, which gives it a grungy documentary feel that runs counter to the fun of pop and frocks. Meanwhile, Candice and Travis argue, back and forth, about who is really doing what and what it means. Every one of these scenes rings true, but they all point in the same direction; inevitably, the film sags along the way.

Because we do get, quite early on, the message that is being shored home to us. We are all boxed in, says Kenisha; we are all playing games, says Travis to a group of young toughs he goads into beating him up in the park, a physical release for some of the tension he has been holding in for the last hour or so.

When Candice first tries to discuss Travis’ frock fetish with him, she asks if he thinks he was born in the wrong body. There is a sense that she would almost prefer an explanation that she recognizes and that would allow her to re-box him, even to her own cost. Pretty Red Dress, to its great credit, doesn’t put anybody in a box. Travis tells Kenisha he just likes to look pretty. His longing to dress is, as they say, what it is. Maybe we’re all a bit off-key. We get it. It’s a good point, just hammered home a bit too hard.

Previous articleFee structure for education at AIIMS could be modelled along lines of IITs, IIMs
Next articleIndia’s Economic Growth Forecast Cut To 6.8% From 7.4% By IMF
LocalTak™Sabse Tez