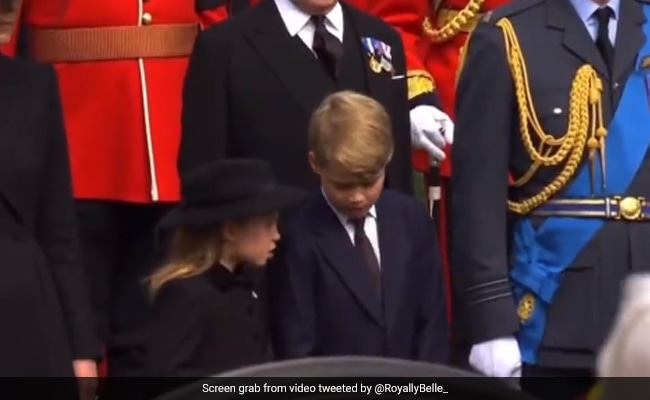 It seems Princess Charlotte, the great-granddaughter of Queen Elizabeth II, is an expert on royal protocol.

“You need to bow,” the seven-year-old Princess appeared to tell her older brother, Prince George – nine – as they waited for the Queen’s coffin to pass by.

Prince George was seen listening intently to his sister as she gave him the instruction while also gesturing with her fingers.

“You need to bow.” TELL HIM QUEEN CHARLOTTE pic.twitter.com/iKheOlZOeV

They were spotted exchanging words as they waited for the coffin to be placed onto the royal hearse.

George and Charlotte, the two eldest children of the Prince and Princess of Wales – William and Catherine – attended the Queen’s funeral on Monday.

Britain said farewell to the Queen at a historic state funeral attended by world leaders, before a ceremonial journey past hundreds of thousands of mourners to her final place of rest.

Inside the majestic Westminster Abbey where the funeral was held, some 500 presidents, prime ministers, foreign royal family members and dignitaries, including Joe Biden of the United States, were among the 2,000 congregations.

Later the attention switched to St George’s Chapel in Windsor Castle – her final resting place – where some 800 guests attended a committal service ahead of her burial.

It concluded with the crown, orb and sceptre – symbols of the monarch’s power and governance – being removed from the coffin and placed on the altar.

Queen Elizabeth’s coffin was then lowered into a royal vault.

Later in the evening, in private family service, the coffin of Elizabeth and her husband of more than seven decades, Prince Philip, who died last year aged 99, will be buried together in the same chapel where her parents and sister, Princess Margaret, also rest.

The Queen died on September 8 at Balmoral Castle, her summer home in the Scottish highlands. She was 96.