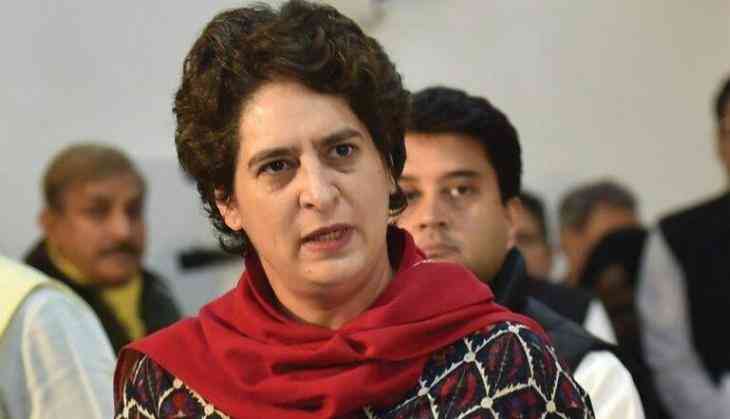 New Delhi/Sitapur: Priyanka Gandhi Vadra Tuesday released a video of her statement, questioning the Prime Minister that why the Union minister has not been sacked and his son arrested, who is allegedly being involved in mowing down the farmers in Lakhimpur Kheri.

She also said in the two minute video that while the minister’s son has not been arrested, the opposition leaders are in custody.

Priyanka further said it was the farmers who have sacrificed their lives for the country’s Independence.

The Congress has posted a video of the incident which sparked violence in Uttar Pradesh’s Lakhimpur Kheri Sunday.

The video was posted on the official Twitter handle of the Congress at 11.33 p.m. on Monday.

The Congress claimed that the video was of the incident in Lakhimpur Kheri.

The police, however, did not comment on the video.

The video shows a farmer, seen wearing a white shirt and a green turban, landing on a jeep’s bonnet as others jump aside on the side to save themselves.

The jeep moves on, followed by a black SUV. At least half a dozen individuals can be seen lying on the side of the road as the two vehicles make their way ahead.

“The silence from the Modi govt makes them complicit?” read the tweet.

Priyanka has been in custody for more than a day now as she was taken in custody early on Monday morning in the Hargaon area in Sitapur .

After a brief spat with the policemen, Priyanka was taken to the PAC guest house and remains there till now.

Hundreds of Congress workers have been sitting outside the guest house, waiting for their leader’s release.

Priyanka has said that as soon as she is released, she will proceed to Lakhimpur Kheri to meet the bereaved families.

In a related development, a senior official said that the government has taken note of the fact that Priyanka spoke to some news channels on phone while she was in custody.

“We are investigating the matter and will soon take action against the channels and those responsible for arranging the interactions,” the official said.