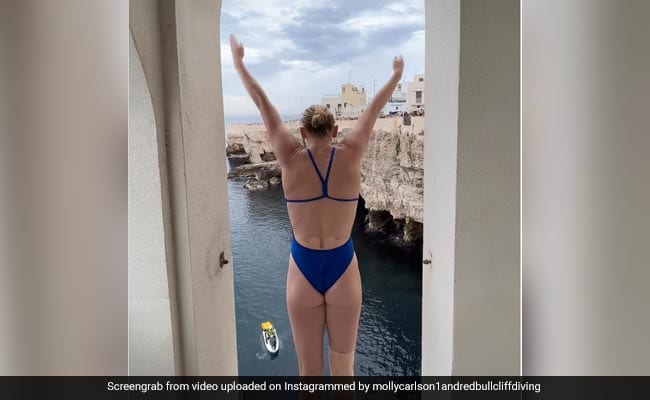 The video was shot at a picturesque town called Polignano a Mare in Italy.

A video of Canadian high-diver Molly Carlson making a terrifying leap from an Italian cliff balcony is becoming viral online. The athlete’s diving prowess is what makes this video so fascinating to watch. Carlson is seen in the opening of the video gazing out from the balcony of a building. Then, after explaining what she’s about to do, she jumps into the water.

Molly Carlson is a member of the high-diver team from Canada. She began as a gymnast before switching to diving at the age of nine in 2008.

“DIVE FROM AN ITALIAN BALCONY? Sure, why not. What a great start to the event here in Italy! One of my favourite locations to jump from. Thanks to @redbullitalia [Red Bull Italia] for making friends with the owner of this gorgeous home,” Molly wrote in the caption and uploaded the video.

People were stunned to see the perfect dive and congratulated Molly on attempting such a dangerous task.

Many people couldn’t stop mentioning how thrilling the feat was.

“That’s how you dive into the weekend in style,” wrote an Instagram user.

One user commented , “Goodness, Molly. You are making me nervous!!!”

A fan asked about her previous injury and wrote, “How is your knee healing?”

Another awestruck user commented, “I don’t even know what to say anymore.”

“I love your videos, but they also terrify me. I’m beyond scared of heights, “posted another admirer.