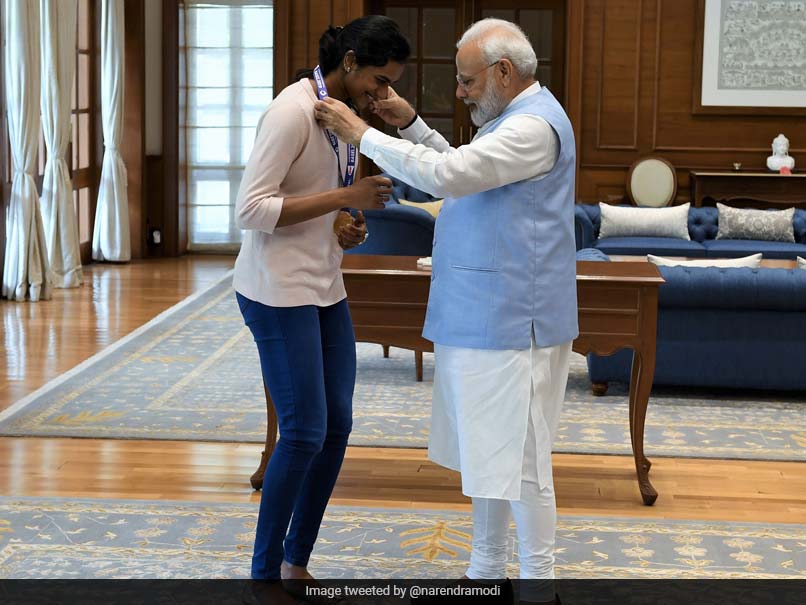 PV Sindhu beat China’s He Bing Jiao on Sunday to win the women’s singles bronze medal on Sunday — her second individual medal at the Olympic Games. Before the Games began, Prime Minister Narendra Modi had asked Sindhu about her diet and if she had to forego one of her favourite food items — ice-cream — as part of her preparation. The Prime Minister had told her then that if she returned with a medal, he would have ice cream with her. After her win over Bing Jiao, her father PV Ramana said that she would be taking PM Modi up on his offer when she returns from Tokyo.

“The encouragement PM Modi had given to her, he had said, ‘you go, we will have ice cream when you come back,’ so she will now definitely go and have ice-cream with the Prime Minister,” he said at a press conference.

“I am happy that she is the first Indian woman to win two consecutive medals at the Olympics. She has brought name and fame to the country,” PV Ramana said about Sindhu’s stunning feat.

“Sindhu is focused and she has that hunger. She enjoys the game,” he said about her daughter.

He said that while he was hopeful that she would win the gold medal, winning the bronze is also a huge achievement.

“Whenever she has gone (to the Olympics), she has brought a medal. She went the last time, she won a medal and she has done it this time too,” he said.

Reacting to Sindhu’s win, PM Modi took to Twitter to congratulate her.

We are all elated by the stellar performance by @Pvsindhu1. Congratulations to her on winning the Bronze at @Tokyo2020. She is India’s pride and one of our most outstanding Olympians. #Tokyo2020 pic.twitter.com/O8Ay3JWT7q

“We are all elated by the stellar performance by @Pvsindhu1,” he tweeted. “Congratulations to her on winning the Bronze at @Tokyo2020. She is India’s pride and one of our most outstanding Olympians.”

Sindhu came into the bronze medal match on the back of a heartbreaking defeat in the semifinal against Tai Tzu Ying, but dominated her opponent from the start. While Bing Jiao tried to keep up, Sindhu eventually won with a comfortable 21-13, 21-15 scoreline.