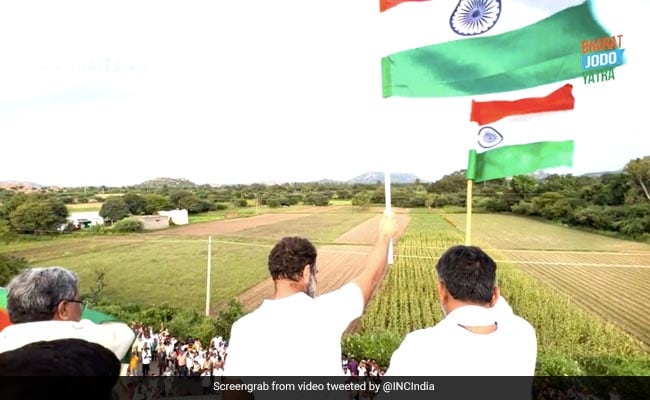 Congress’s Rahul Gandhi hit a literal ‘high point’ on his Bharat Jodo yatra today. In a video tweeted by the party, the 52-year-old was seen climbing a water tank in Karnataka’s Chitradurga, from where he waved the national flag. State party chief DK Shivakumar kept him company. So did former Chief Minister Siddaramaiah, who on another memorable occasion during the yatra, was seen jogging hand-in-hand with Mr Gandhi for a short stretch.

“Tiranga unites us all. #BharatJodoYatra embraces the true essence of the Tricolour,” read the video caption from the official Twitter handle of the Congress.

Tiranga unites us all.#BharatJodoYatra embraces the true essence of the Tricolour.pic.twitter.com/utpGxMTVTn

As the 3750-km yatra wends through the states, Mr Gandhi has been seen carrying children, tying mother Sonia Gandhi’s shoelaces and even at a “one full and two half push-up” session on an asphalt road with Mr Shivakumar, party secretary KC Venugopal and a child.

The heartwarming photos have been lapped up on social media, going viral in most cases. They have also provided talking points, and in some instances — subject of vigorous criticism by the BJP.

On social issues front, Mr Gandhi has been seen interacting with scholars, organ donors and addressing many public meetings.

On one instance, he was also seen addressing a crowd amid heavy rains, making the point that “Heat, storm or cold can’t stop this yatra”.

What the Congress calls its “social issues campaign” had started in India’s southernmost tip Kanyakumari, on September 7 and will end in Kashmir after 150 days. The Karnataka stretch started on September 30.

The yatra, coming ahead of the 2024 general elections, is expected to bring the country’s focus on social issues, the Congress has said.

Mr Gandhi plans to walk all the way through 12 states in the campaign to “unite India” and send a message against what he calls the “divisive politics” of the BJP.

Previous articleIssa Rae Says Ezra Miller Is “A Clear Example Of The Lengths That Hollywood Will Go To To Save Itself And To Protect Offenders” – Deadline
Next articleSamuel L. Jackson Stars – Deadline
LocalTak™Sabse Tez