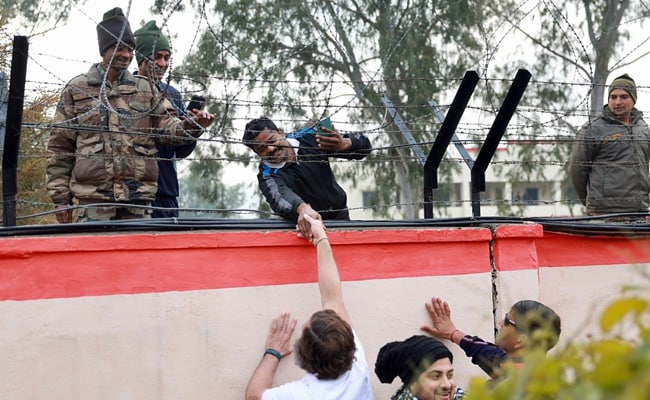 Mr Gandhi shook hands with the soldiers in the camp through the barbed wire.

Congress leader Rahul Gandhi on Tuesday shook hands with some Army personnel watching his ‘Bharat Jodo Yatra’ from behind the boundary wall of their camp as the march passed through the garrison town of Nagrota here.

Mr Gandhi’s gesture to reach out to the soldiers despite the walls secured with barbed wire came a day after his senior party colleague Digvijaya Singh sought proof from the BJP government on the surgical strikes on terror camps across the border.

The former Congress president, who resumed his ‘Bharat Jodo Yatra’ from Nagrota towards Kashmir, paused outside an Army camp after spotting some personnel watching from behind the wall.

He approached them and shook their hands before marching forward, waving at the crowd gathered on either side of the road and at those trying to catch a glimpse from their homes and shops.

Some of the Army personnel were seen filming the foot march on their mobile phones.

Snubbing Digvijaya Singh, a former Madhya Pradesh chief minister, for questioning the surgical strikes, Mr Gandhi termed his comments “ridiculous”, and said the armed forces are doing their job “exceptionally well” and do not need to give any proof.

Mr Gandhi, who faced a volley of questions from the media on Mr Singh’s remarks on the surgical strikes and the Pulwama terror attack, said he and his party completely disagreed with the statement.

Mr Singh had on Monday questioned the veracity of the surgical strikes and accused the government of peddling lies.

Addressing a public meeting during the yatra in Jammu and Kashmir, Mr Singh alleged that the government did not agree to the CRPF’s request of flying its personnel from Srinagar to Delhi and 40 soldiers sacrificed their lives in Pulwama in 2019 to a terror attack.

“They talk of surgical strikes. They claim to have killed so many people but no proof is given. They are ruling by peddling a bundle of lies,” he had alleged.

Watch: Woman Scares Metro Passengers By Dressing Up As ‘Manjulika’ In Noida