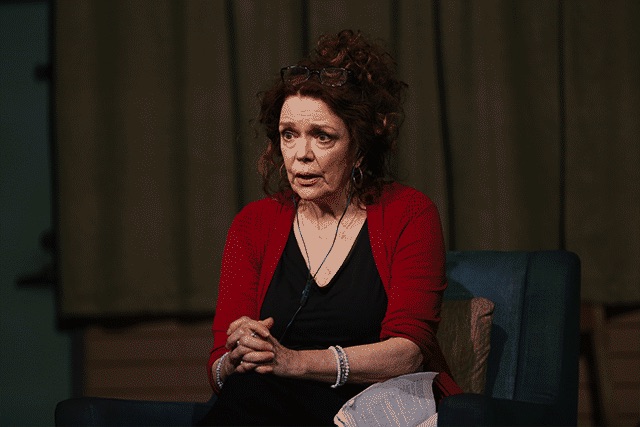 Is This A Room, conceived and directed by Obie Award winner Tina Satter, with text taken from the FBI interrogation of Winner, will begin previews at the Lyceum Theatre on Sept. 24, with an opening night on Oct. 11. Dana H., which tells the true story of the playwright’s mother, who was held captive in a series of Florida motels for five months, begins previews Oct. 1 at the Lyceum, with an opening night scheduled for Oct. 17.

The two productions will play alternating performances for a 17-week engagement through January 16, 2022. Is This A Room is a Vineyard Theatre production, and Dana H. is a production of the Goodman Theatre, Center Theatre Group and Vineyard Theatre. The two plays were presented in succession as part of Vineyard Theatre’s 2019-2020 season, and will be produced on Broadway by Dori Berinstein, Sally Horchow and Matt Ross.

‘In Treatment’s Uzo Aduba, ‘This Is Us’ Ron Cephas Jones Lead Cast Of Broadway’s ‘Clyde’s’

Is This A Room tells the true story of Reality Winner, the 25-year-old former Air Force linguist who was surprised at her home by the FBI on June 3, 2017, with text taken from the FBI transcript of her interrogation. Emily Davis will make her Broadway debut, reprising her lauded Vineyard Theatre performance.

The play is described by producers as a theatrical thriller in which Winner’s life is “upended before our eyes, and we’re left questioning American values and the very nature of the truth.” Additional casting and the full design team will be announced shortly.

Vineyard’s Off Broadway run of Dana H. was interrupted by the shutdown and had previously been scheduled for a return engagement at Vineyard this fall. Vineyard members and ticket-buyers will have priority access to tickets for the play when it returns, instead, on Broadway. Details will be announced at a later date.

Told in the title character’s own words and reconstructed for the stage by her son, Hnath’s work “shatters the boundaries of the art form and challenges our understanding of good and evil.” Deirdre O’Connell will reprise her Obie Award-winning performance in the title role.

Tony nominee Hnath (A Doll’s House, Part 2), adapted the play from interviews with his mother Dana Higginbotham, conducted by Steve Cosson. Les Waters will direct, and the full design team will be announced shortly.

Ashley Judd is walking again after shattering her leg in an accident in the Congo nearly six months ago. The actress and activist went...
Read more
Previous articleBSF troopers shoot at intruding drone, force it to turn back in J&K
Next articleSony Pictures International Productions Names New Co-Heads – Deadline
LocalTakSabse Tez