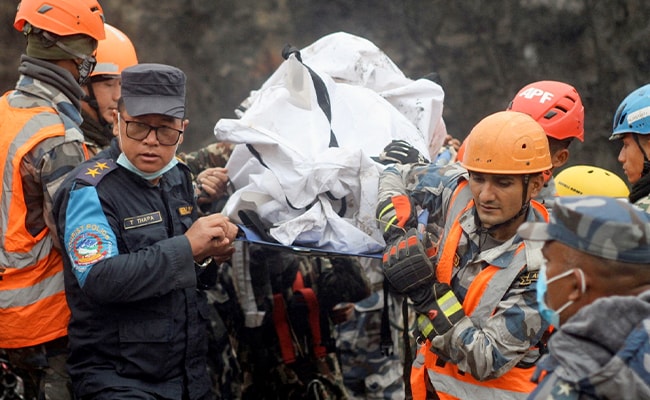 Among the casualties of the deadly plane crash in Nepal last week, 5 were Indians. (File)

The relatives of four Indians who died in a plane crash in Nepal are still waiting to receive the dead bodies of their family members despite spending their third day at a hospital here on Saturday.

Nepalese authorities on Tuesday started handing over to family members the bodies of those killed after Yeti Airlines’ aircraft with 72 people crashed minutes before landing in a river gorge in the resort city of Pokhara on Sunday.

Fifty-three Nepalese passengers and 15 foreign nationals, including 5 Indians, and four crew members were on board the aircraft when it crashed. The five Indians, all reportedly from Uttar Pradesh, have been identified as Abhisekh Kushwaha, 25, Bishal Sharma, 22, Anil Kumar Rajbhar, 27, Sonu Jaiswal, 35, and Sanjaya Jaiswal.

The body of Sanjaya Jaiswal was handed over to his family on Friday and taken back home.

However, the relatives of four other Indian nationals have been waiting for three days to receive the dead bodies of their relatives.

Sonu Jaiswal’s father Rajendra Prasad Jaiswal was among the relatives waiting at Tribhuvan University Teaching Hospital to receive the bodies.

One of the relatives said they want to take back all four bodies of the Indians in a single consignment.

The body of Bishal Sharma was identified on Saturday, the hospital sources said.

The hospital completed postmortem on 49 dead bodies on Friday. Twenty-two dead bodies of Nepali nationals have been handed over to their families in Pokhara.

While a total of 12 dead bodies, including one of an Indian national, were handed over to their family members on Friday, on Saturday, the hospital authorities handed over 15 more dead bodies to the relatives.

According to a doctor involved in identifying the bodies, the signs provided by the family members were not sufficient to identify the dead bodies.

“We will try to verify the fingerprints of the dead bodies on Sunday,” the doctor said.

The Nepal Army said on Saturday it continued the search operation at the Seti River gorge and the surrounding areas on Saturday to find the remaining one body.

Meanwhile, a team of the European Union (EU) team that was planning to visit Nepal to undertake an ‘on-site evaluation’ of aviation safety has postponed its trip.

According to a statement issued by the Civil Aviation Authority of Nepal (CAAN), the planned visit of the EU’s technical team has been postponed for the time being.

In a joint statement issued on Friday, Director-General of the CAAN Pradeep Adhikari and EU’s Ambassador to Nepal Nona Deprez said that the scheduled visit of the on-site evaluation team to Nepal has been put off.

“Given the current context, related to the terrible accident and in mutual agreement, the EU and CAAN have reached the conclusion that it would be in our best interest to postpone a planned on-site assessment visit mandated by the EU Air Safety committee for the time being,” the statement said.

“The primary focus for CAAN at this time is on dealing with the aftermath of the accident. The European Union will continue to assist CAAN in its efforts to improve the aviation safety situation in Nepal,” it said.

Earlier in October last year, a team of the EU undertook a study on the aviation safety of Nepal and concluded that notable progress had been made in the country’s air safety.

The team had returned with a decision to send another team to carry out an on-site evaluation of the aviation safety of Nepal.

The EU has listed Nepal on the air safety list since 2013.