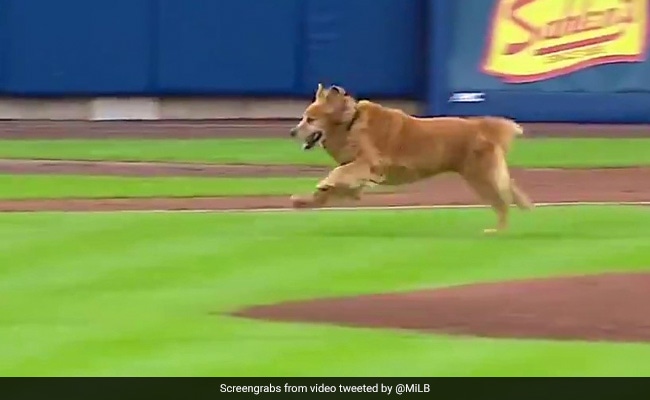 It’s all fun and games until a dog steals the show. This stunning yet adorable situation was witnessed by the audience at a Minor League Baseball game held in Buffalo, New York. The video of a golden retriever named Rookie is going viral on the Internet for all the right reasons. The game between The Buffalo Bisons and Lehigh Valley IronPigs took an interesting turn because of this canine interruption. Rookie is appointed to fetch bats for the Trenton Thunder. However, the four-legged friend could not contain the excitement for the Buffalo’s specially held “Dog Day.”

The 23-second video shared on Twitter by Minor League Baseball shows the debutant dog storming into the field, halting the game for a while. We can see Rookie happily jumping around on the grass before returning to the sides. They wrote in the caption how Rookie “got a little excited during his Sahlen Field debut” with the Buffalo Bisons. They further tagged Trenton Thunder to declare cheekily, “We still love him.”

.@BatdogRookie got a little excited during his Sahlen Field debut with the @BuffaloBisons ????

The video has racked up over 5 lakh views and more than 5,000 ‘likes’. Users were quite ecstatic to stumble upon the video and left some amusing comments below. An impressed user dropped witty words that read, “Cut Rookie some slack, he’s usually very good, he just had to show off for all his new friends.”

Cut Rookie some slack, he’s usually very good, he just had to show off for all his new friends

Another dog lover tweeted in support of Rookie. “That doggie did nothing wrong,” read the comment.

That doggie did nothing wrong.

This person reasoned the impromptu behaviour of the dog as, “Clearly, he was making sure there were no bats on the mound that the pitcher could have tripped on. I feel confident that Darth will find Bat Dog Rookie innocent.”

Clearly he was making sure there were no bats on the mound that the pitcher could have tripped on. I feel confident that @darth will find @BatdogRookie INNOCENT

Such more reactions are proof that the spontaneous act helped Rookie gain a new fanbase altogether.

Rookie, you did NOTHING wrong. I would have done EXACTLY the same thing.

GIVE HIM THE BALL!!!

Nothing wrong with saying Hi to frens. Good Rookie

Speaking of the game, the Bisons lost to the IronPigs with a score of 3-0. The game was also interrupted by the rain showers.

Previous articleEchoes, Uncertainty As Afghan Pilots Await US Help In Tajikistan
Next articleApple, Intel Said to Be Among Attendees of White House Meeting on Chip Shortage
LocalTak™Sabse Tez