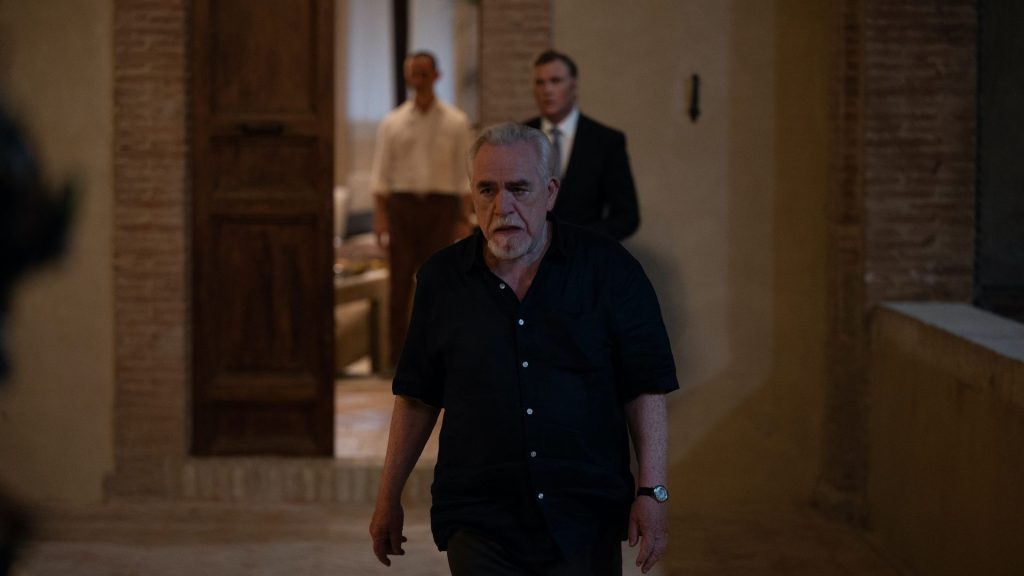 While Succession’s Kendall Roy (Jeremy Strong) seemed like he might have met his end in the penultimate episode of Season 3, it turns out in finale “All the Bells Say” that he’s survived. And while he has so often been at odds with siblings Roman (Kieran Culkin) and Shiv (Sarah Snook), in this episode, he ends up finding himself on their side.

The episode hinges on Roy patriarch Logan’s (Brian Cox) negotiations with GoJo’s Lukas Mattson (Alexander Skarsgård) with regard to the future of Waystar Royco, with Gerri (J. Smith-Cameron) informing the Roy siblings of major fines to be imposed on Waystar by the DOJ, and the company’s compromised position, as it enters into negotiations with GoJo. (“GoJo’s market cap has overtaken ours,” she says, “and their board may be considering entertaining other options.”

When Logan goes to meet with Mattson, he asks, “Are we doing this f***king merger or not? Shall we dance or what?” with Mattson speaking to the weakness of his bargaining position. “[GoJo is] flying like a rocket ship,” the entrepreneur tells him, “and you’re sinking like a lead balloon.” While Mattson sees his company and Roy’s as making for a good fit, what he’s really interested in is taking over leadership of Waystar, ruling the roost while giving Roy a massive payout and control of various assets which will allow him to save face. Mattson’s takeover would give him control of the company’s board, and while he promises Roy to fill it in a way that is “so f***ing nice” for him, Roy says that “this is not happening.”

Later, Shiv, Roman and Connor (Alan Ruck) stage an intervention with Kendall—concerned that he is, either consciously or subconsciously, trying to kill himself, after almost drowning in a pool. Connor’s girlfriend Willa (Justine Lupe) says “F**k it” and begrudgingly accepts his marriage proposal, with all of the Roys (apart from Logan) then attending their mother Caroline’s (Harriet Walter) wedding to Peter (Pip Torrens). At the reception, Connor informs his siblings that Logan appears to be trying for another baby, with Shiv raising red flags about what’s going down between Logan and Mattson. It appears that a financier has just jetted out to Mattson’s Italian estate, meaning that a deal between the two is almost in place.

While Kendall is down in the dumps about his life, informing Shiv and Roman about the waiter that got killed the night of Shiv’s wedding, and is thus apathetic for the moment about business goings-on, he ultimately decides to team up with Shiv and Roy to help them go “full coup.” After all, if Mattson’s allowed to take over Waystar, it means that Logan has no confidence that any of the siblings ever can, will or should take over the company. And in order for him to make the change of control happen, he needs a supermajority amongst those involved with the holding company, including them. (The Roys’ mother Caroline had negotiated their voting authority in the course of her divorce proceedings with Logan.) The idea is that they’ll block Logan’s deal with Mattson, and then push him out of the company entirely, splitting it up into equal pieces under each of their control.

When the Roys pull up to Logan’s door, the patriarch immediately tries to push against their loyalties to each other and manipulate them to his advantage. While he tries to divide them and pit them against one another, they stand a united front, with Shiv and Roman having come to realize that they’ll never be able to trust their father, or the notion that he has their best interests in mind, as much as he might say so.

Shiv reiterates that she and her siblings have the power to kill their father’s deal, and they will—to which Logan responds, ‘You’re playing toy f**ing soldiers. Go on, f**k off!”

Unfortunately for them, it turns out that in this case, Logan isn’t bluffing. In fact, he’d recently connected with Caroline and gotten her to revise the terms of their divorce agreement, such that the siblings would no longer have a say in the deal with GoJo.

The Emmy-winning drama series was renewed for a fourth season in October.