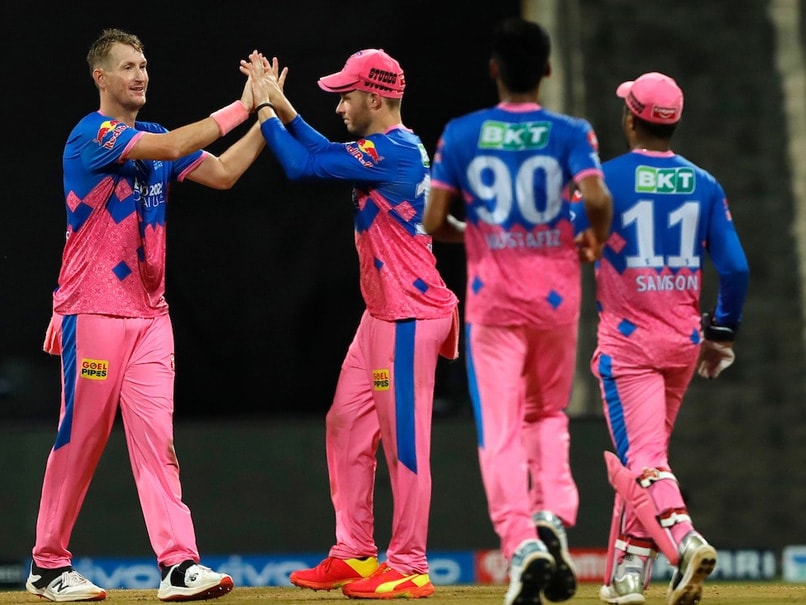 Chris Morris’ four-wicket burst in the death overs and skipper Sanju Samson’s measured innings gave Rajasthan Royals a much-needed win over Kolkata Knight Riders in the IPL, on Saturday. Royals pacers, who were smart with their change of pace, restricted KKR to 133 for nine after Samson opted to bowl first. Royals lost their openers, Jos Buttler (5) and Yashasvi Jaiswal (22), in the powerplay but they never lost control of the chase and got over the line in 18.5 overs for their second win in five matches.

For KKR, it was their fourth loss in five matches. Morris, the most expensive player in the IPL auction history, proved his worth with figures of four for 23 in four overs.

Royals witnessed a nervy moment early in the chase when Buttler received a nasty blow on his helmet as he tried to negotiate a sharp bouncer from Pat Cummins.

Soon after, the England cricketer was trapped in front by mystery spinner Varun Chakravarthy. Jaiswal, playing his first game of the season, played some exquisite strokes before getting caught in the deep.

Royals were 50 for two in the first six overs. After Jaiswal’s dismissal, Samson (42 not out off 41) stitched a 45-run stand with Shivam Dube (22) before getting his team home alongside David Miller (24 not out off 23).

Samson, who is known for his free-flowing strokeplay, curbed his natural instinct to anchor the chase. Earlier, KKR were not able to find rhythm in their underwhelming innings. The highly-rated Shubman Gill (11) disappointed yet again. He was dropped before his uncomfortable stay in the middle finally ended with a run out off a brilliant direct hit from Buttler.

The Royals pacers were impressive with their variations and did not offer the batsmen any freebies in the Powerplay as KKR laboured to 25 for one in six overs. It became 45 for two in the eighth over when Gill’s opening partner Nitish Rana (22) made room to cut a wide ball off Sakariya but the extra bounce led to his downfall as he ended up edging it to the wicketkeeper.

Skipper Eoin Morgan sent Sunil Narine ahead of himself to give the innings a much-needed boost but it did not work with the West Indian departing after hitting one boundary, leaving KKR at 55 for three in 10 overs.

KKR’s troubles worsened after Morgan got was run out without facing a ball following a bad mix-up with Rahul Tripathi (36 off 26). Their most destructive batsman Andre Russell had to wait till the 16th over to get into the middle with the innings not going anywhere at 94 for five.

Dinesh Karthik (25 off 24) came up with some badly needed boundaries in his bid to improve the scoring rate. Russell smashed a straight six off Morris in the fifth ball he faced but that remained his only big hit of the night.

Morris removed both Russell and Karthik in the same over which allowed Royals to limit KKR to under 140.