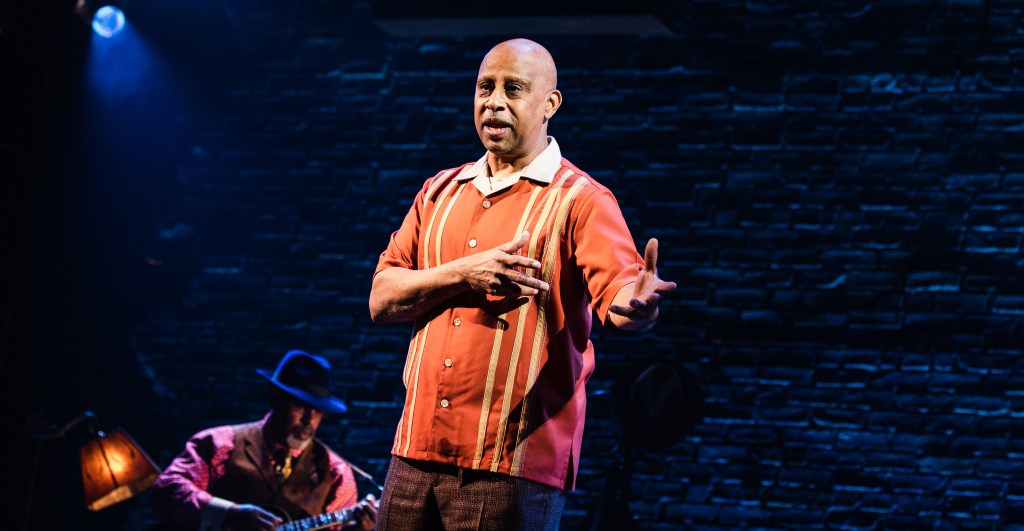 Ruben Santiago-Hudson summons a world of ghosts, or at least as many as will fill a couple boarding houses and a lifetime of gratitude, in his affectionate Lackawanna Blues, the one-man autobiographical tour through a childhood made golden by the presence of a strong and loving guardian angel.

Written, directed and performed by the immensely talented Santiago-Hudson, Lackawanna Blues, produced by The Manhattan Theatre Club at Broadway’s Samuel J. Friedman Theatre, showcases the actor as he inhabits some two dozen characters from his eventful childhood and adolescence – men, women, old, young, some less fit for the company of an impressionable mind than others, but all contributing at least some small perspective on the rich and varied universe of adulthood, or at least the portion that passes through the doors of Miss Rachel’s two boardinghouses in 1950s-’60s Lackawanna, New York, near Buffalo.

Miss Rachel Crosby, known to many and certainly little Ruben as Nanny, is, in no small way, the center of that universe – an orbit of drifters, lost souls, down-on-their-luck seekers who find their way to the rooms she lets as way stations and refuges for those who need it most, the ones damaged by violence, racism, age, domestic abuse, alcohol or just plain bad luck, sometimes of their own making.

Nanny, says Santiago-Hudson in one of the play’s most famous lines, was “like the government if it really worked,” a source of seemingly inexhaustible kindness, unyielding strength, late-night meals, a dose of no-nonsense discipline and, on occasion, hard cash, for those in need of safe haven.

And there is never any shortage of such souls. Little Ruben is one, a little boy too often left alone in one of Miss Rachel’s rooms by a young mother who works nights and does her best. Miss Rachel offers to raise the boy, and does, providing the child with the love and security that will save him (and that courses through this play like a wellspring).

Performed before the streetfront facade of the urban dwellings, and alongside the the great blues guitarist Junior Mack (playing the compositions of the late Bill Sims Jr.), Santiago-Hudson breathes life into figures that people his memory as vividly as they seem to have populated those rooming houses so long ago.

And those figures are many, enough to fuel an ensemble-cast 2005 HBO movie that starred S. Epatha Merkerson in an Emmy-winning performance as Nanny. What took an entire cast of actors on television is handled on stage by the tireless and versatile Santiago-Hudson, shifting vocal delivery and physical demeanor to portray such characters as Ol’ Po’ Carl, Numb Finger Peter and Sweet Tooth Sam, along with 20 or so lesser-named folk peopling the playwright’s past.

As you might have guessed by those three character names, Santiago-Hudson doesn’t shy from the florid. While the characters who wander through these Lackawanna rooms are most often depicted with a specificity that brings each to life, Santiago-Hudson sometimes veers onto what seems the turf of the fabulist as he reaches for a sort of Blues mythic. Ol’ Po’ Carl, a veteran of the Negro Leagues, delivers a string of malaprops (a longtime drinker, he suffers, he says, from “roaches of the liver”) that seem more writer’s pen than a neighborhood eccentricity, and even Nanny herself can feel, well, gilded, a saint of the streets recalled with such glowing nostalgia that we can forget she’s meant to be an actual human being.

But Lackawanna Blues is, after all, a memory play, and Santiago-Hudson makes no bones about presenting the ghosts (and occasional monster) of his childhood with an enveloping and inviting compassion. He does them proud.