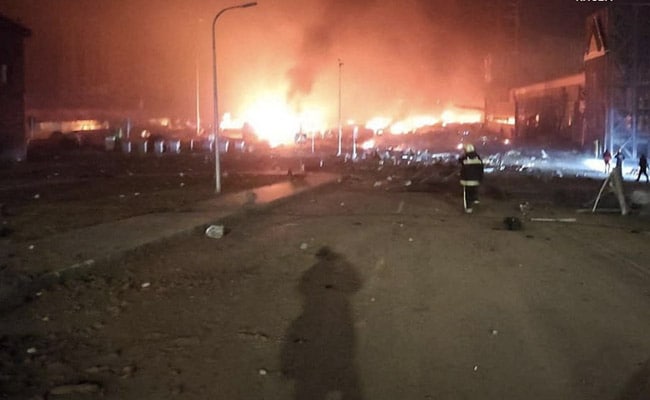 Moscow warned Friday it would step up missile attacks on Kyiv in response to what it said were sorties across the border, the day after its Black Sea naval flagship sank.

Russian long-range missiles targeted a military factory near the Ukrainian capital that may have been where the Neptune missiles that Kyiv says were used against the Moskva warship were manufactured.

The Moskva missile cruiser had been leading Russia’s naval effort in the seven-week conflict, and the circumstances around its sinking and the fate of its crew remain murky.

Russia’s defence ministry said a blast on the vessel was the result of exploding ammunition and that the resulting damage had caused it to “lose its balance” as it was being towed to port.

The fleet has been blockading the besieged southern port city of Mariupol, where Russian officials say they are in full control.

Moscow, which invaded Ukraine partly because of deepening ties between Kyiv and NATO, on Friday warned of unspecified “consequences” should Finland and Sweden join the US-led defence alliance.

The two countries are considering joining NATO in light of Russia’s devastating invasion of neighbouring Ukraine.

“The choice is up to the authorities of Sweden and Finland,” Russian foreign ministry spokeswoman Maria Zakharova said in a statement.

“But they should understand the consequences of such a step for our bilateral relations and for the architecture of European security as a whole,” she said.

“They will automatically find themselves on the NATO frontline,” Zakharova said.

Russian forces last month started withdrawing from around the Ukrainian capital as they are redeployed to focus on territory in the east of the country, but the city remains vulnerable to missile strikes.

“The number and scale of missile strikes against targets in Kyiv will increase in response to any terrorist attacks or sabotage committed by the Kyiv nationalist regime on Russian territory,” the defence ministry said.

“As a result of the strike on the Zhulyansky machine-building plant ‘Vizar’, the workshops for the production and repair of long-range and medium-range anti-aircraft missile systems, as well as anti-ship missiles, were destroyed,” the ministry said.

Seizing the eastern Donbas region, where Russian-backed separatists control the Donetsk and Lugansk areas, would allow Moscow to create a southern corridor to the occupied Crimean peninsula.

Ukraine said that Russian strikes had killed five people in the area, after President Volodymyr Zelensky said Moscow’s forces were aiming to “destroy” the region.

The presidency said “fighting was continuing along the entire front line” in Donetsk.

In a late-night address Thursday, Zelensky said that “Donbas is the main target for Russia.”

“It’s Donbas that Russia wants to destroy. It is the Lugansk and Donetsk regions that Russian troops are destroying so that only stones remain and so there are no people left at all”.

Thousands of civilians are believed to have died in the besieged city, many of their bodies still trapped in apartment buildings.

The fighting has subsided and Mariupol’s residents have started coming outside in search of food, water and an escape route from the city.

“I know that we experienced horror and we don’t know what will happen next. We live like we’re on top of a volcano,” said 59-year-old Tatyana, a municipal employee waiting for humanitarian aid.

“There’s fear, fear! What else is there to say? A lot of people are suffering,” said Tatyana, who didn’t give her last name.

Moscow on Thursday accused Ukraine of sending helicopters to bomb a village in Russia’s Bryansk region — not far from the border with Ukraine — injuring eight people.

Later the same day, the head of Russia’s Belgorod region said a village close to the border was shelled by Ukraine, while residents from this and a nearby village had been evacuated as a precaution.

Kyiv has denied the helicopter attack, instead accusing Russia of staging the incidents to stir up “anti-Ukrainian hysteria” in the country.

Separately, the Russian defence ministry said Friday its strategic rocket forces “eliminated up to 30 Polish mercenaries” in a strike on the village of Izyumskoe, not far from the city of Kharkiv in northeastern Ukraine.

In the south of the country, where Moscow’s invading forces have solidified their greatest gains, Ukraine said it had swapped several captured soldiers with Russia.

“After tense negotiations, we managed to reach agreements on a prisoner exchange near the village of Posad-Pokrovskoye, where four Russian military personnel were exchanged for our five,” Ukraine’s defence ministry said.

Russian troops have captured the city of Kherson, which is the administrative capital of the eponymous region where the declared swap took place on Friday.

Zelensky this week offered to swap pro-Kremlin tycoon Viktor Medvedchuk, one of the richest people in Ukraine and who was arrested by Kyiv after escaping house arrest, for Ukrainians captured by Russia.