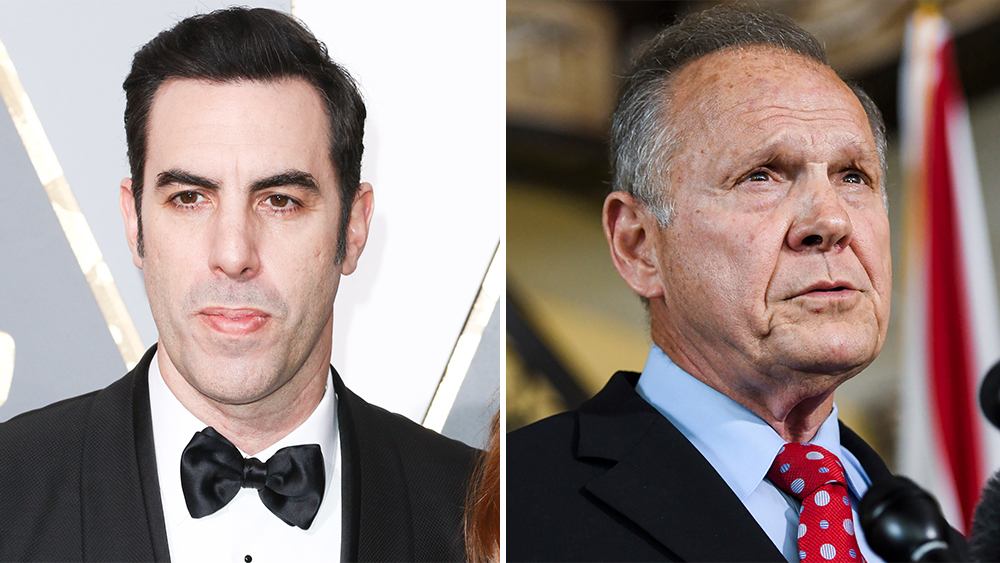 EXCLUSIVE: Unsurprisingly, there is little that Sacha Baron Cohen and failed GOP Senate candidate Roy Moore see eye to eye on. However, you still might raise an eyebrow a bit to discover that discord literally includes which way The Trial of the Chicago 7 star turns his gaze.

As the defendants seek to have the case dismissed, the latest fracas in Moore’s almost three-year old $95 million defamation suit against master satirist Cohen over a damning appearance in Showtime’s Who Is America? finds the political plaintiff’s lawyer hoping to take the double Oscar nominated performer to task for where he was looking during a recent deposition via Zoom. Really.

“The video does clearly show Cohen looking downward – most likely at his phone or tablet — with virtually every question that I posed, and it is thus obvious that he was being fed answers by someone,” declares Moore’s lawyer Larry Klayman in an amended letter sent to U.S. District Court Judge John P. Cronan on April 7. The letter (read it here) takes on the confidentiality of the video of the Borat Subsequent Moviefilm actor’s deposition and his on-camera mannerisms, so to speak.

‘Borat Subsequent Moviefilm’ Writers On The Unique Script Process That Got Borat Back To The Oscars – Contenders Film: The Nominees

“He is indeed the self-described proud master of fraud and deception and his being fed answers comes as no surprise given his past conduct,” the conservative and extremely litigious (just ask Hillary Clinton) Judicial Watch founder continues. “I urge the Court to watch the Cohen video and reach its own conclusion, which is obvious.”

“The ramifications of this obvious conduct are criminal in nature,” Klayman adds, tossing an implied statutory grenade into the mix.

Commonly with depositions there are lawyers for both sides in the room, as well as technical support staff and the individual being deposed. And on such occasions, there is often some chatter or permitted interruption from said lawyers depending on the nature and direction of the questions. However, with a global pandemic going on and bicoastal participants in this New York-based case, things are a little different as you would presume.

And that’s where it seems the heart of this tempest in an apparent teacup sits. Showtime had no comment on the matter when contacted today by Deadline. But Cohen’s personal attorney did explain.

“Sacha Baron Cohen is 6’3’’ and this was a Zoom deposition,” Russell Smith tells Deadline of what actually went down in the digital sit-down a few weeks ago. “He had to look down at his laptop to see the lawyer asking him questions,” notes the SmithDehn LLP lawyer who is involved in the Moore matter for Cohen.

“He never looked down at text messages from counsel during the deposition, because there were no such messages,” Smith adds of his client’s conduct.

Nonetheless, with a formal response to Klayman’s April 7 letter coming from Defendant’s lawyers on April 9, Judge Cronan yesterday stepped in to bring the volume down and try to find some common ground. As the federal judge’s order of April 12 noted:

The parties are directed to meet and confer on the confidentiality designation issue raised by Plaintiffs pursuant to Paragraph 13 of the Protective Order entered by the Court on December 22, 2020. The parties are ordered to file a joint status letter on April 16, 2021, notifying the Court whether this dispute has been resolved. In the event this issue has not been resolved by the parties, the Court will conduct a conference to address the issue. Further, after receiving the parties’ joint status letter on April 16, 2021, the Court will schedule a conference to discuss the other issues raised in Defendants’ April 9, 2021 response letter, including Plaintiffs’ counsel alleged violation of Local Civil Rule 1.5(h)(1) and his communications with Defendants’ counsel. This conference likely will also address the confidentiality designation dispute in the event it is not resolved by the meet-and-confer process.

First filed in September 2018 in D.C. District Court, and then moved to the Empire State at the Defendants’ urging, the defamation case from Moore and his wife centers on the one-time Alabama Supreme Court chief justice’s appearance in Cohen and Showtime’s 2018 Who Is America? limited series, along with a supposed ““pedophile detector.”

Moore says he was conned into the interview with a heavily prosthetic made-up Cohen, who was posing as Israeli anti-terrorism expert. Cohen, Showtime and the one-time CBS Corporation (the case was filed before the 2019 corporate remarriage with Viacom by the media company) say Moore signed a release. Moore, who faced a slew of accusations of sexual misconduct with minors during his unsuccessful 2017 Senate bid, alleges his signature “was obtained through fraud” and therefore the release is “void and inoperative.”

In the course of the ongoing case, the April 7, 2021 letter from Klayman, who has been recently suspended by the D.C. Court of Appeals over ethics issues, came one day after Davis Wright Tremaine LLP attorneys for Cohen and fellow defendants Showtime and CBS participated in a briefing on their latest motion to have the matter tossed out.

In fact, the April 7 letter quote above is the second letter from Klayman on the same topic. That second letter was submitted later on April 7 “after Defendants sent an email to Plaintiffs’ counsel pointing out that the letter provided false information to the Court and requesting its immediate withdrawal,” to quote the Defendant’s lead lawyer Elizabeth McNamara in her April 9 correspondence to the Judge Cronan – a letter where the Davis Wright Tremaine LLP attorney calls out Klayman for “repeated deceptive conduct.”

“Plaintiffs have repeatedly confirmed that their objection to Defendants’ confidentiality designation is based on their outrage at the fact that the Who Is America? segment featuring Roy Moore is available to the public while the video of the Cohen deposition is not,” McNamara goes on to say (read it here). “In other words, Plaintiffs wish to make the video public purely to cause Mr. Cohen public discomfort in retaliation for the discomfort Defendants allegedly caused Plaintiffs, and, at the same time, to generate publicity for Plaintiffs’ counsel.

Arguing that courts “regularly restricted access” to depositions and other visual material related to celebrities like Cohen, McNamara concludes: “Such use of deposition video is inappropriate and should not be countenanced by the Court.”

What the court ultimately decides will come in the next few weeks. In the meantime, Cohen is up for Best Supporting Actor for his performance as infamous activist Abbie Hoffman in The Trial of the Chicago 7 at this month’s Oscars, and Best Adapted Screenplay for Borat Subsequent Moviefilm. The 93rd Academy Awards take place on April 25 in Los Angeles and virtually.