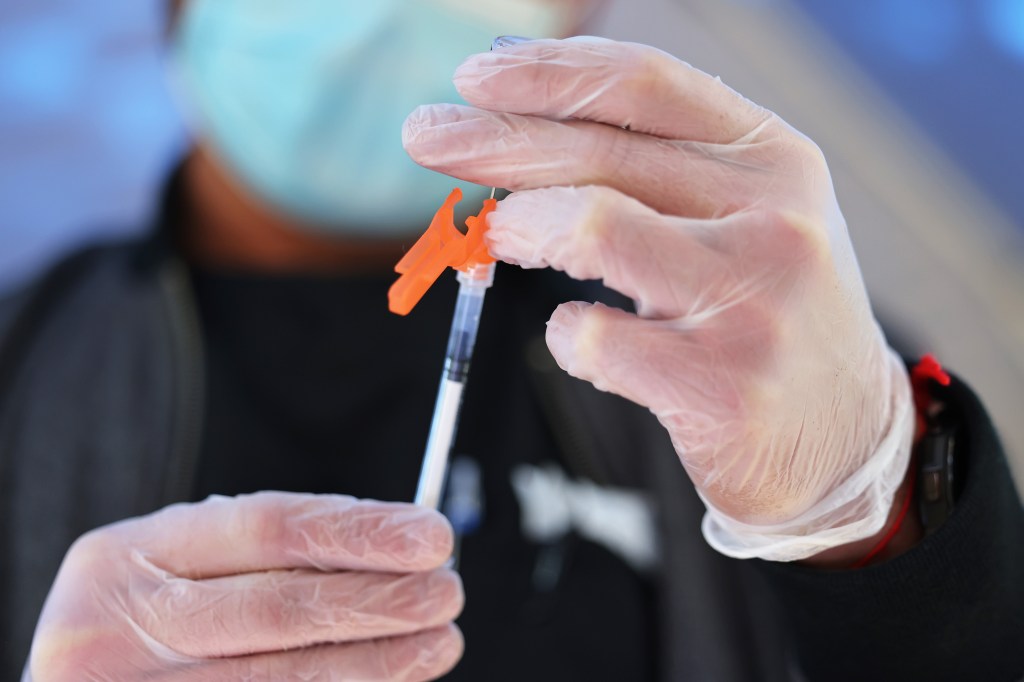 SAG-AFTRA president Fran Drescher, saying that Hollywood’s Covid vaccination mandate “walks the razor’s edge of compromising religious, disability and body sovereignty freedoms,” is urging the guild’s national board to review the most up-to-date science on the effectiveness of vaccines on the spread of the virus’ latest variant before agreeing to extend the industry’s vaccination mandate.

The industry’s Covid protocols, which include a narrowly defined provision that allows employers to require vaccinations as a condition of employment, expire on September 30. The mandates, however, are “subject to reasonable accommodations as required by law for individuals who cannot be vaccinated due to disability or a sincerely held religious belief, practice, or observance,” though opponents argue that those exceptions are too rarely allowed.

Drescher made a similar plea at a contentious board meeting last month, when members of the guild’s political factions that supported her election last year reportedly yelled at her during the meeting, claiming that she was “misinformed” about some aspects of the effectiveness of the vaccine. “The board blew up at her for two hours,” said a person who attended the meeting. “She took a lot of unfair, disrespectful attacks for speaking her truth.” Others in attendance, however, said, “No one was disrespectful to Fran.”

Writing in the current issue of the SAG-AFTRA Magazine, Drescher expressed “concern that giving employers the discretionary rights to decide which of us can or can’t work based on our medical history is a dangerous slippery slope. If an employer can decide you can’t work unless Covid vaccinated, what’s next, we can’t work without a monkeypox vaccine?”

“I fully understand and appreciate the importance the vaccine has played in the saving of lives during the early years of the pandemic,” she wrote. “I myself am vaccinated. And when it was added to the Return To Work Agreement (RTWA) last year, it certainly seemed like the right thing to do.”

She added, however, that “with thousands of unvaccinated members still unable to work, all new information begs review and consideration before deciding our position on the next RTWA. All I ask is we educate ourselves with the newest science and make an informed decision because members’ livelihoods hang in the balance.”

Drescher added: “We are learning in real time, and it behooves review by the National Board of the latest scientific information about the vaccine’s efficacy for this variant.”

To support her call for a board review of the latest science before extending the mandates, she wrote that, “In July, Dr. Fauci stated the current variant evades the vaccine preventing infection.”

And while Fauci said last month that vaccines “don’t protect overly well against infection” from the virus’s latest variant, he also said that they do “protect quite well” against severe disease, hospitalization and death, and he wholeheartedly encourages everyone who can do so to get vaccinated and boosted.

Speaking on July 12 at a press briefing by the White House Covid-19 Response Team, Fauci — who is President Joe Biden’s chief medical adviser and director of the National Institute of Allergy and Infectious Diseases — said that the latest Covid BA.5 subvariant “has a growth advantage compared to the earlier Omicron subvariants. It substantially evades neutralizing antibodies induced in people by vaccination and infection. But the vaccine effectiveness against severe disease, fortunately for us, is not reduced substantially or at all compared to other Omicron subvariants.”

Speaking to Neil Cavuto on Fox News that same day, Fauci — who has tested positive for Covid twice — said: “One of the things that’s clear from the data that even though vaccines, because of the high degree of transmissibility of this virus, don’t protect overly well, as it were, against infection, they protect quite well against severe disease, leading to hospitalization and death. And I believe that’s the reason Neil, why at my age, being vaccinated and boosted, even though it didn’t protect me against infection, I feel confident that it made a major role in protecting me from progressing to severe disease. And that’s very likely why I had a relatively mild course. So my message to people who seem confused, because people who are vaccinated get infected, the answer is if you weren’t vaccinated, the likelihood you would have more severe course than you did have when you were vaccinated.”

Even so, he told Cavuto that he’s not calling for government “mandating or things like that.” And while noting that many Americans behave as though the pandemic is over, Fauci told Caputo that “We are certainly not over it. And I think that people have an understandable desire to put this in the rearview mirror and say, ‘We’re through with it.’ But that’s just not the reality, Neil. And when I say that I don’t mean to scare people or to get people to feel they have to dramatically alter their lives or do anything with mandating or things like that. We’re not talking about that. We’re talking about making use of the available interventions that we have. Let me give you an example: 67% of the people in this country are vaccinated. We rank very low among developed and developing nations in the proportion that are vaccinated. Of those who are vaccinated, only about half of them have gotten their first boost. We’ve got to do better than that. We’re giving the virus the opportunity to continue to spread in our community.”

And that can be mitigated, Fauci said, “if we do simple things, which are not disruptive in any major way – vaccination, testing.” More than 1 million Americans have died of Covid-19 since the pandemic began.

The next day, Fauci told CNN’s John Berman that the latest subvariant “has what we call a transmission advantage over prior variants, which clearly because of its ability to evade immune responses either from the vaccine or from people who have been previously infected, the ability to infect an individual is enhanced over prior variants.”

Noting that 300 Americans were dying every day last month because of Covid, and that “hospitalizations are ticking up,” he told Berman that “There are things that we can do to blunt that. We still don’t have as many people vaccinated as we need – only 67% of the population. Only half of those are boostered. We need to be using the mitigations that we have available: masking where appropriate, vaccinating people who aren’t vaccinating, and boosting people who are ready and eligible for their boosts. We can do that but we’re not doing it to the extent that we should be doing it.”

Fauci’s views on mandates have evolved, as has the science – which is what Drescher wants the board to re-examine.

Speaking to the Association of LGBTQ Journalists last September, when the Delta variant put the country was in the middle of a fourth surge, Fauci said that while the government has no desire to mandate vaccinations, mandates by businesses and universities could be quite effective in stemming the spread of the virus.

Vaccinations as a condition of employment on film and TV productions were first allowed in July 2021, when producers were given “the option to implement mandatory vaccination policies for casts and crew in Zone A on a production-by-production basis.” Zone A, where unmasked actors work, is the most restrictive of the safe work zones on sets. Labor and management agree that the protocols have enabled jobs and productions to safely rebound during the pandemic.

“The vaccines really do work, even against the Delta variant,” Fauci said in September. “But we have a really unfortunate situation in that we have a pretty hard-core group of people that we’re trying to persuade them, or mandate them if they’re not persuaded, to get vaccinated. So, we have about 75 million people who are eligible to be vaccinated who have not yet gotten vaccinated. That’s the key to ending this. That would be the key. You would cut down dramatically the number of infections if we got the overwhelming majority of that recalcitrant group vaccinated, which is really a shame – somewhat paradoxical. We have the tools to end this, and yet we’re not doing it. I mean, for reasons that are almost inexplicable, you know, people because of their political bent feel that they don’t want to be told to mask up and they don’t want to be told get vaccinated. Which is inexplicable given that we’re in the middle of the most deadly pandemic that we’ve ever faced in the last 102 years. And to have people, because of the divisiveness in society, not wanting to contribute to the solution, and by doing that, they become part of the problem. But that is the way it is, unfortunately. Hopefully, we can change that.”

Asked what could change that, he said: “I think if you get trusted public messengers who put aside political ideology and convince people to get vaccinated. The other way to do it is to have many, many more mandates. I know that rankles a lot of people, but you’re going to see situations locally – I don’t think you’re going to see centrally derived mandates – but there are going to be mandates where colleges, universities, places of business, large corporations – they’re gonna say, ‘If you want to work for us, you’ve gotta be vaccinated.’ And I believe that’s going to turn this around, because I don’t think people are gonna not go to work or not go to college or not go to university, they’re gonna do it. You’d like them to do it on a totally voluntary basis, but if that doesn’t work, you’ve gotta go to the alternatives.”

When asked for a comment, Unite for Strength, the SAG-AFTRA faction that supported Drescher’s election, issued this statement:

“Unite for Strength firmly supports the Return-to-Work protocols. We acknowledge the diversity of opinions on this matter, yet strongly believe in the importance of closely following the science and adjusting guidelines as supported by epidemiologists. The Return-to-Work protocols have enabled our members to return to work under the safest possible conditions. As guided by science. Nothing is more important than the safety and health of our members and the guidelines have minimized the risk of illness or worse. Sadly, the topic of vaccines has unnecessarily become a politically charged topic, yet both the SAG-AFTRA Safety Commission and National Board have been consistent in respecting the science behind the RTW protocols and the thousands of working actors who are thankful for them.”

A source with MembershipFirst, the union’s opposition party that opposed her election, said: “Good for Fran. She’s a fighter. This is not a political issue, and our position is probably no different than Unite for Strength’s.”