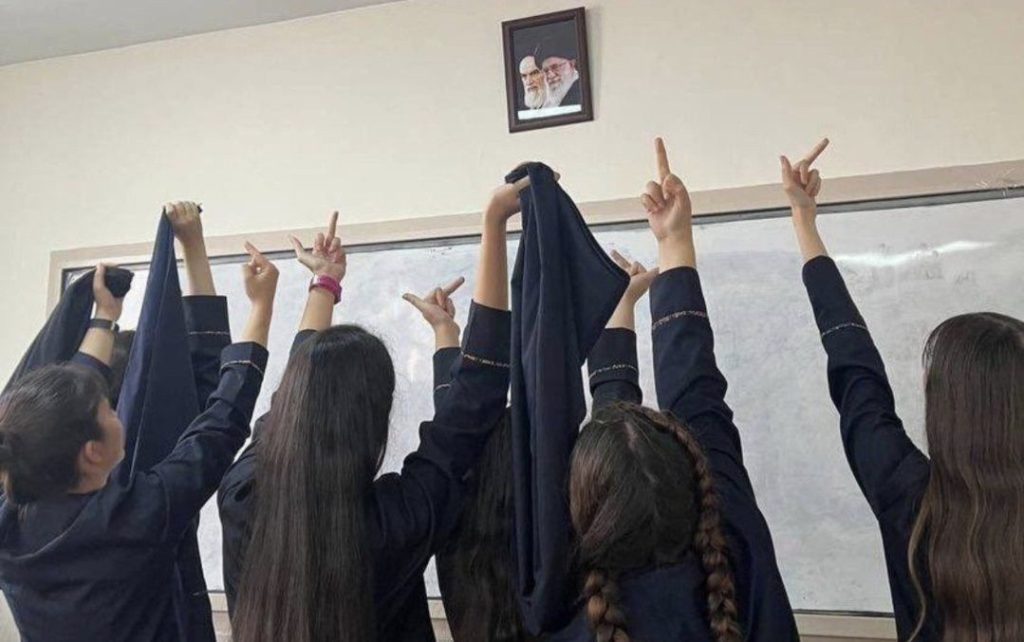 Editor’s Note: For months now, Iranian screenwriter and satirist Nicole Najafi has been determinedly raising awareness on social media from her home in New York, posting reportage coming to her direct from Iran as the people push back against the regime, and using her growing platform to explain the situation to the world in simple terms, with the footage to back it up. While women remove their head coverings with heroic defiance and ‘dissenters’ are imprisoned and burned, beaten and murdered, Najafi has, unflinching, covered it all.

In July, Iranian filmmaker Jafar Panahi was sentenced to six years in jail for criticizing the government. That same week, Iranian filmmakers Mohammad Rasoulof and Mostafa Aleahmad were also detained. Panahi has been banned from leaving Iran and making films for the past 12 years for his previous criticism of the regime.

Here, Najafi’s guest column for Deadline breaks down the power struggle and the shocking reality of the current situation, so that the underrepresented might be given voice and the twisted truth be dragged into the light.

What follows is a history so extreme and convoluted that Najafi likens it to an unbelievable movie plot, one which stands in sharp and shocking contrast to the freedom of our U.S. democracy as we prepare to vote on Tuesday.

The world’s on fire (sometimes literally) and none of us have any cortisol to spare on another tragedy. I’m not asking you to feel sad or scared. I’m asking you to hear one of the most inspiring stories of our time.

What is unfolding in Iran is the kind of story that, if it were to be made into a film, would be some combination of Rocky, Mulan, and Mad Max: Fury Road.

I promise if you stick with me until the end of this column, a) you will become an armchair expert on Iran, able to navigate cocktail conversations with relative ease, and b) you’ll feel a little more hope for the future than you did before you read it.

First, some quick context. This is our cold open while the credits roll because you need to know where our characters are coming from.

Iran may seem small, but it is one of the largest countries in the world. It also houses a whopping 10 percent of the world’s oil—double that of Russia. To put it simply, oil equals money. Remember the opening of Jumanji when some ancient civilization discovers the game in the desert? Iran’s oil is a little bit like that. It’s the suitcase of cash in Fargo—the blessing that eventually becomes a curse.

The regime in control of Iran is called the Islamic Republic, and they are in power, despite the fact that the majority of Iranians don’t want them to be. How did Iranians end up with them? It all stems from that cursed suitcase of cash.

Our inciting incident comes in the 1950s when Iranians elected a progressive Prime Minister named Mossadegh. He took back control of Iran’s oil from the British, which angered them. They conspired with the CIA to overthrow Iran’s democracy. Their plan was to tilt power to Iran’s Shah, who was much cozier with them. They called it Operation Ajax.

The British and CIA pulled all sorts of tricks to make Operation Ajax happen, including bribing Tehran’s most feared mobsters to hold pro-Shah demonstrations. If Tony Soprano were outside my house telling me to support the Shah, I’d be a little afraid to hold a counter protest in support of the prime minister. I enjoy having my knee caps.

But the real power of Operation Ajax was its propaganda. They launched a massive information war via the news media, which turned public favor against Mossadegh.

Operation Ajax was a success; Mossadegh was ousted and all power shifted to the Shah. The world wouldn’t learn the truth of Operation Ajax until many years later when the CIA declassified it and made a sheepish public apology. (Thanks, I guess?)

The Shah was neither a hero nor a villain, but he had a tragic flaw. He was paranoid of losing power. After seeing what happened to Mossadegh, you would forgive him for feeling a little uneasy. His big mistake was banning any free speech against him (among other errors we don’t have time for), but what you need to know about the Shah’s reign is that Iran was socially liberal, but not a democracy.

Cut to: our story’s midpoint in 1979, when the people led a revolution to get rid of the monarchy and get back their secular democracy.

There were rumblings of support for Ayatollah Khomeini, a religious political leader whom the Shah had exiled. He represented the opposite of the Shah—a populist touting old Iranian traditions who knew exactly how to play into the people’s dissatisfaction with the Shah to gain public support.

Jimmy Carter called up Khomeini and they agreed that if he came to power, he would share Iran’s spoils with the West. Carter then put Khomeini on a plane to Iran and helped him rise to power. The suitcase of cash strikes again.

But this is our film’s midpoint, which never goes exactly the way we think it will go. As you might have guessed, Khomeini betrayed the West, and worse, he betrayed his own people. He went full Mike Pence and turned Iran’s modern, liberal society into The Handmaid’s Tale (literally — Margaret Atwood based The Handmaid’s Tale on Khomeini’s Iran).

Khomeini and his cronies sapped the country’s oil for themselves and left nothing for the people. They stripped women of all rights and ruled with an iron fist to maintain power. Meet: the worst villains in the world.

First, they came for women’s bodily autonomy by mandating that women wear the hijab. Thousands of women took to the streets to protest this. These brave women were met with public beatings, creating a fear of dissent that has remained a pillar of the regime’s power.

Under Khomeini, women went from being senators to not being allowed to jog in public. He chipped away at their rights—slowly and then rapidly (this is how it happens, so please vote!). It has now been 43 years and Iranians are still living under the thumb of these goons. Given recent history in America, it’s somewhat easier to see how unpopular tyrants with unpopular religious beliefs can rule over a majority that doesn’t want them.

Iranian women never accepted the regime’s gender apartheid. They have risen up many times, but every movement has been met with brutal crackdowns. During an uprising in 2019, the regime shut off the internet and killed over 1,500 people in three days. Without internet access, news of this massacre could not reach the rest of the world to stir up an international outcry. It felt like all was lost.

And then, a glimmer of change came a few weeks ago in September. Another civilian uprising was sparked, this time after the regime murdered a young woman named Mahsa Zhina Amini for showing a few strands of hair under her hijab. Protests erupted, and, like always, the regime’s crackdown was swift and deadly.

Except this time, Iranians didn’t back down. Despite tear gas, water cannons, arrests, and death, people continued to pour into the streets chanting for freedom and an end to this regime.

The regime ratcheted up their crackdowns, arresting public figures and killing children and mothers. But this has only backfired, because every new atrocity they commit only fuels the fire in Iranians’ hearts. The people want freedom and they have made it clear that they are never going back.

We are now on day 52, and the uprising has turned into a nationwide revolution with Iranian women and girls at the forefront. It is the single biggest challenge to the regime’s power since its inception, but it is also the first woman-led revolution in modern history.

In the beginning, just like in every underdog story, no one said we could win. Now? Even the stuffiest political experts in America are saying the regime could topple.

The scenes coming out of Iran right now are astonishing. We are seeing 13-year-old girls throw water bottles and chant “dishonorable!” at regime officials, bullying them off their middle school grounds. We are seeing university students break down makeshift barriers made by police to keep women out of gender-segregated canteens. The entire country—men, women, old, young, rich, poor, religious, non-religious—are united behind one singular goal: to defeat this regime and win back their secular democracy.

We’re facing our story’s climax now, but I’m asking all of you in our industry to help us write this ending. You can do this by spreading awareness about Iran online and offline. The villains in the regime have banked on you and the rest of the world not caring enough about Iranians to pay attention to their fight. Prove them wrong. Take away the regime’s weapon of secrecy. They can only commit their atrocities in the shadows, so the more we shed a spotlight on Iran, the more accountability the regime must contend with.

The regime has imprisoned and silenced some of our most beloved filmmakers and writers. Poet Atefeh Chaharmahalian was imprisoned for speaking out about freedom of expression (the irony). Another poet Nasibeh Nami was arrested for sending a balloon into the sky with a protest message. Filmmaker Jafar Panahi just collected a Special Jury Prize at the Venice Film Festival for his film No Bears while he was tear gassed in a prison cell. These desperate acts are the last gasps of a dying regime. Help us snuff out the embers.

We have never been as close to freedom in Iran as we are right now. This is a pivotal moment. You can be a huge part of this story with us. Help the underdogs win and defeat these villains, so that goodness can prevail. Let’s send a reminder to all dictators and politicians that we, the people, are in charge. Your voice counts and we need you.