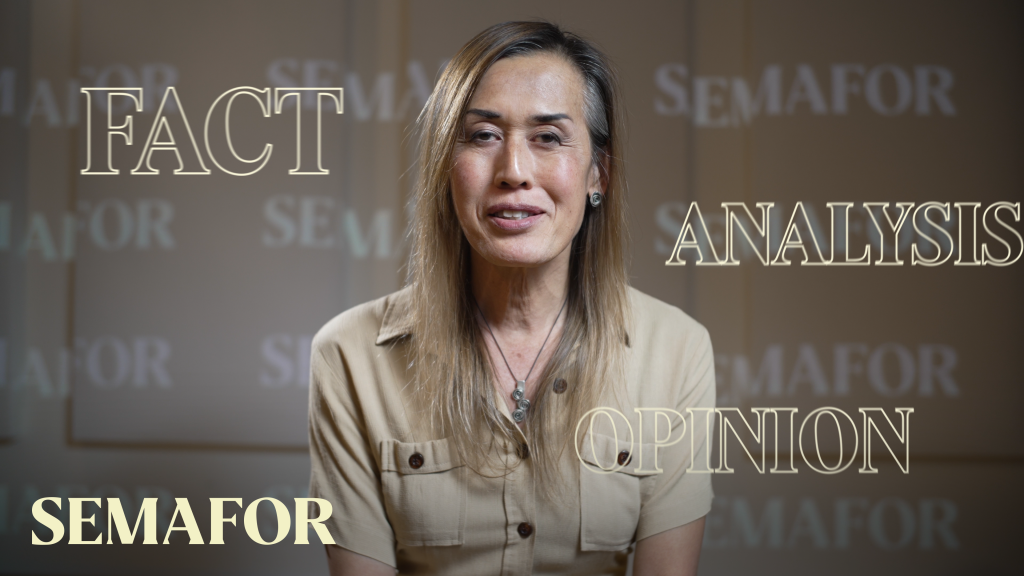 The long-anticipated news startup Semafor launches on Tuesday with a team of prominent journalists producing a mix of scoops, analysis and newsletters, but its most unique feature may be in the way that it presents its stories.

Stories are broken down to different components, starting with the actual news, followed by the reporter’s view; a disagreeing view; an alternate, often international perspective; and a look at what is next;

“We’re sort of thinking a lot about what consumers respond to, what do they want, what bothers people about this black box as a news article,” said Ben Smith. “We are trying to strip it down to its elements and do that in a transparent way. That’s a big bet for us, basically.”

Semafor also is trying to distinguish itself with a global focus, with a brand that “travels the world seamlessly,” Justin Smith said.

Smith, who is no relation to his co-founder, said that the “mission of Semafor is to really try to build a new global news brand that is listening very carefully and obsessing over addressing or solving some of the consumer frustration around polarization, bias and all the ill effects that social media had on the news ecosystem.”

Semafor was chosen as it is the same word in 35 different languages and it means “the bearer of a signal.” The Semafor.com homepage, with text against a yellow backdrop and a middle “central well” that features some of its marquee reporting. There is some humor in caption boxes connected to photos.

Voracious news consumers already receive multiple newsletters per day, from brands like Politico, Axios and legacy outlets like The New York Times and The Washington Post.

Semafor is betting that its offerings will stand out, as it has hired a lineup of top journalists as authors. It launches with eight newsletters, including a global daily update called Flagship, along with others tied to Africa, climate, technology and business. David Weigel, formerly of The Washington Post, is writing a newsletter called Americana and Steve Clemons, its editor at large and a guru in the live events space, is writing Principals, about politics and power in D.C. Smith, who had been media columnist at the Times, will author a media newsletter, with a debut column focused on the identity crisis at the Gray Lady.

The Africa coverage, led by Yinka Adegoke, will be staffed by journalists based on the African continent and African-born journalists living in the U.S. and London. “Africa is on the one hand one of the most dynamic future growth areas of the world, but it also is one of the least served markets in terms of the news industry,” Justin Smith said.

The new brand also is launching a video component, having hired Joe Posner, who created Explained at Vox. Among the formats is one called Witness, featuring testimony of those caught in world events. One of the first editions will feature someone who was caught in the “no man’s land” of Ukraine. The witness’s description is being fed into the artificial intelligence engine Stable Diffusion, which ties images to a text narrative. “They are giving you the visualization as the person talks,” Ben Smith said. “It’s just an incredibly interesting, powerful, scalable use of AI for news.”

Among those leading the 60-person staff are Gina Chua, its executive editor, and Rachel Oppenheim, its chief revenue officer. Benjy Sarlin will be Washington bureau chief, while other newsletters will be bylined by business and finance editor Liz Hoffman, technology editor Reed Albergotti, as well as Adegoke on Africa and Bill Spindle on climate. In stories, bylines are displayed above headlines, and Chua said that with a delineation of what is news and what is analysis, “we’re leaning into the fact that we have a really talented group of journalists, and we’re really centering their voice around it. It’s not some anonymous institutional voice.”

The two Smiths’ plans generated significant curiosity when they announced early this year that they were departing their high profile positions to start a company. They engaged in conversations through the years, Justin Smith said, that often touched on the frustrations of news consumers and the loss of trust in media.

“If you really get into the minds of news consumers, there’s not a lot of happiness going on,” he said. “There’s not a lot of delight and enchantment with the news sources. I think people feel that since the advent of social media, 15 to 20 years ago, the news ecosystem has been polluted. It’s been transformed. The traditional news players have responded in a spotty way.”

In the build up to the launch, Semafor has marketed heavily on Twitter, while holding a series of public events, including one in July co-sponsored by the Knight Foundation on polarization and trust in news that featured Q&As with Taylor Lorenz of The Washington Post and Tucker Carlson of Fox News. More recently, it held a live event in Paris with AstraZeneca as a partner. In the works for November is a “trust in news” event, also in partnership with the Knight Foundation, an Africa summit for December and a world economy summit next year. Justin Smith said that Semafor’s events will be “an extension of our newsroom,” with plans for as many as 40 or 50 events in 2023.

To start, the revenue mix will be 75% advertising and 25% event sponsorships.

The brand also has lined up a number of corporate partners, including Genesis/Hyundai, Verizon, Mastercard and Qualcomm, as well as with Gallup, where its Washington newsroom will be based. Twitter and Semafor also have entered into a video distribution partnership in which content will be “amplified at scale” across the social media platform. Oppenheim said that they have been “hearing very loud and clear that corporate brand advertisers are looking for partners in the new space that are not polarizing.”

Justin Smith said that email sign-ups are growing rapidly, although he declined to disclose an exact figure at this point. Plans are to eventually launch a subscription offering, as well as to introduce new regional and national editions, likely to include the Middle East, Asia, the EU, the UK, India, Brazil, Japan and Southeast Asia.

The international focus may be what distinguishes Semafor from other recent start ups.

Five years ago, Axios launched with some similar goals, as it introduced what it called Smart Brevity, a more concise way of getting to the point in news articles. With its mix of politics, technology and media coverage, the news brand also has expanded to locally focused offshoots in major cities. The experiment has paid off: Axios sold in August to Cox Enterprises in a deal valued at $525 million.

While there has been some focus on turbulence in the digital space, as well as concerns over an advertising recession, Justin Smith is bullish on the business model.

He pointed to the rise in consumer adoption of subscription at various news brands and the loosening of tech platform giants’ grip on the market. “Even if that moves just another tick or two on the dial in favor publishers and away from platforms, that is going to be a pretty significant weight shift in terms of advertising opportunity for publishers, especially those that are building direct relationships with audiences,” he said.