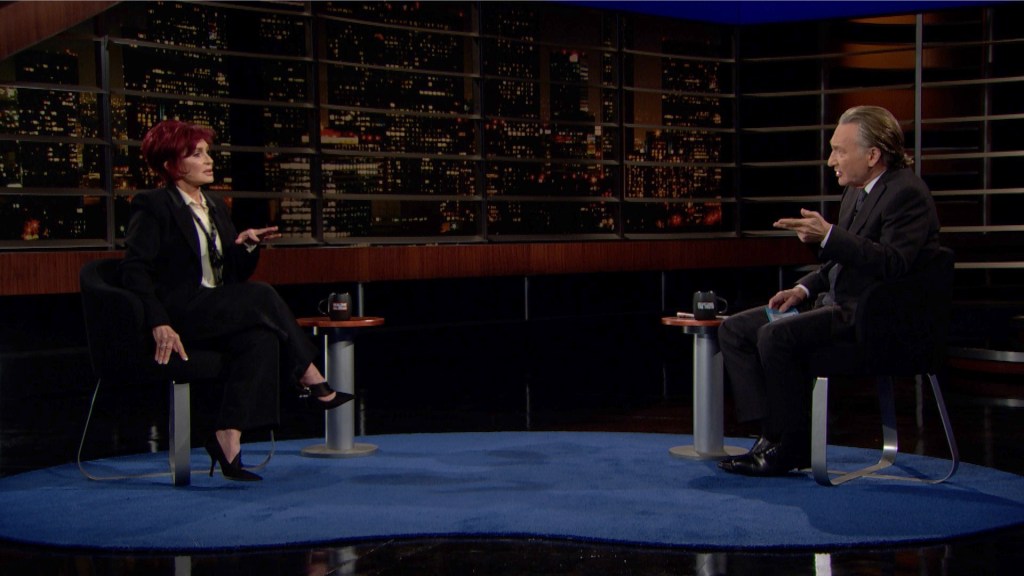 The Oscars aren’t for more than a week, but if they were handing out awards for disgruntle old white people, Sharon Osbourne and Bill Maher may find themselves in a tie.

“I’m sorry, I’m 65, you’re 68, I know who I am, I don’t need re-education,” the Real Time host exclaimed to applause from his studio audience and a smile from Osbourne, who he showered fanboy praise on. “We can’t judge everyone by their worst moments,” Maher stated earlier in the interview as the former The Talk co-host offered a steady stream of self-justifications for conduct that got her canned from the CBS show.

“I’ve been called so many things in my life. I am so used to being called names, but a ‘racist’ is one I will not take.” – @MrsSOsbourne #RealTime pic.twitter.com/Wek5Iwqhxy

“I’ve been called so many things in my life, I am so used to being called names, but a racist is one I will not take,” said Osbourne to big applause in the much hyped in-studio sit-down that was filmed earlier Friday. “I’m going to be just fine, I’m fine, as I said I’m a fighter, I’m fine,” Osbourne went on to assert, maybe playing the populist card a little too hard.

“It’s not fair, because it isn’t about being a racist,” she added. “It’s about maybe about not knowing what is correct and woke for your language that day, cause it changes from day to day,” Osbourne went on, getting in a whining dig at Robin DiAngelo’s 2018 best seller White Fragility in the process too.

How To Watch Prince Philip’s Funeral Online & On TV

“The idea in there is that you have two choices if you are White, you are either a racist or a racist and you don’t know it,” Maher eagerly jumped in with his best Tucker Carlson impression, or not. That one may have taken the oxygen out of the studio, as even Maher’s audience groaned.

Later on the Osbourne-less panel portion of Real Time, Maher continued in the same vile vein when bloviating on the cop killing of 13-year-old Adam Toledo and 20-year old Daunte Wright earlier this week. “There is absolutely no excuse for what happened to these people when they got shot …but it’s also good advice: don’t resist arrest,” Maher said. “That’s just never ends well, that’s not the place to make your stand.”

In her first interview since exiting The Talk under a cloud of controversial comments about race and a defense of pal Piers Morgan’s high-volume drubbing of Meghan Markle’s royal revelations to Oprah on March 7, the one-time rock’n’roll manager may say she’s fine, but she certainly kicked up a lot of dust tonight on HBO’s Real Time – and the premium cabler host was certainly in her corner.

With the conclusion of an investigation into the heated March 10 discussion about race between Osbourne and fellow co-host Sheryl Underwood, CBS on March 26 announced that the former, the last of The Talk’s original co-hosts, had decided to leave the show after 11 seasons. As the daytimer drama swirled around the often-injudicious Osbourne and The Talk went on a sudden hiatus, the Ozzfest founder alternated between an apology and doubling down in arsonist interview with the likes of Entertainment Tonight. The latter burned a lot of bridges and good will at CBS, sources told Deadline at the time.

Since leaping or being pushed from The Talk, CAA-repped Osbourne, despite tales of being lawyered up and paid off in big bucks, the past America’s Got Talent judge has pretty much stuck to innocuous social media postings until tonight.

Throwing shade on “woke language,” slagging Meghan Markle, and widely missing the point with utterances like “unless you agree with every person of color, then you’re. racist,” Osbourne and Maher had a mutual admiration drum circle going, while totally missing the actual beat.

In fact, in their bubbling indignation of “all this drama,” to quote Maher on what Osbourne said and her support of canned Good Morning Britain presenter Morgan, the duo tonight had only one point of mild disagreement. That schism came when Maher hinted there may be some truth to Markle and white privilege “poster boy” Prince Harry’s claims of racist treatment by their fellow Royals. “The old bag is a 100, Maher quipped of Queen Elizabeth II to Osbourne’s wry dismay.

On the eve of the funeral of consort Prince Phillip, Maher and Osbourne agreed that the scandal ridden British Royals are “cold to everyone” and bi-racial Meghan Markle was no exception. Okay.

A hot get for any show after her latest stint in the spotlight, the unreticent Osbourne certainly expected a sympathetic crash pad from Maher. The once time self-described libertarian host has had his fair share of controversary over the years, much of it self-created and sometimes self-aggrandizing, like Osbourne.

Having seen advertisers abandon his ABC show Politically Incorrect in 2001 after he refuted George W. Bush’s contention that the 9/11 terrorists were cowards, Maher more recently was in scorching water for comments about slavery and use of the N-word on his HBO show.

Emmy winner Maher wasn’t canned by the now AT&T-outlet in 2017 after his moronic remarks. However, HBO did call the comments “inexcusable and tasteless” and subsequently pulled the segment in which the remarks appeared from any future iteration of the show. Maher himself later put out a statement saying he was “very sorry” for using the racial slur.

The interview with Osbourne followed Maher’s monologue praising Joe Biden for “kicking ass” and this week revealing his intention to pull U.S. troops out of Afghanistan after two decades of that front on the War on Terror.