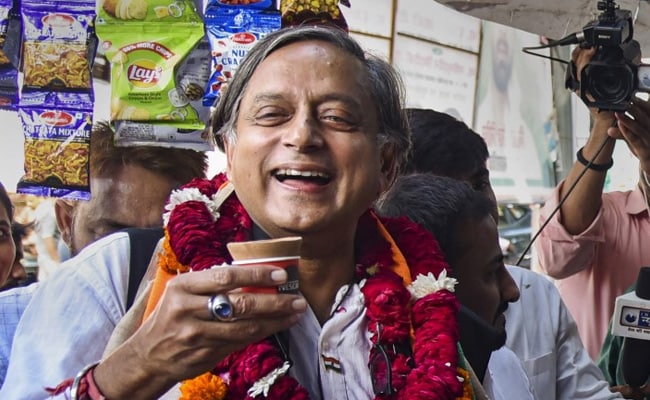 The voting will take place on October 17 in every state capital through a secret ballot.

On the eve of voting to elect the new Congress president, Shashi Tharoor on Sunday said he is batting on a track with an “uneven bounce” and doesn’t want “pitch tampering”.

Asked to comment on the fairness of the polls, Mr Tharoor in an interview told PTI, “I had said there is an uneven playing field but that doesn’t mean that (Madhusudan) Mistryji is unfair. I think he is very fair-minded, and it is feasible to get a fair result from his system. However, in the party we see that the work done by some leaders isn’t quite fair.” “I am batting on a pitch with uneven bounce but I have to bat on it. I just don’t want there to be any pitch tampering,” he said.

The 66-year-old Congress leader also said of the 12-13 states he had gone to seek votes, Madhya Pradesh showed “fairness”. However, he evaded a reply when asked if he got fair treatment in Uttar Pradesh.

“Mistryji has addressed this through a secret ballot for the elections,” Mr Tharoor said.

On being asked what plans he has for Uttar Pradesh that sends 80 MPs to the Lok Sabha, Mr Tharoor said, “We have to definitely rejuvenate the party everywhere, including UP.” He pointed out that the party got only three per cent of the votes in the last a few polls in the state.

Asked to compare the election for the post of the Congress president with that of the UN Secretary General which he had contested, Mr Tharoor said, “That was 15 voters and not difficult to contacting them because there were 15 capitals, 15 foreign ministers and 15 governments. Here we are talking about 9,000 (voters).” In 2006, Shashi Tharoor was the official candidate of India for the post of Secretary General and stood second in the race.

To a question that he addressed his voters in Hindi at the UP Congress office, Mr Tharoor said, “My Hindi was always like this. The problem was that I don’t use it inside Parliament because I am a bit of a perfectionist when it comes to the language.” “I know that there are many shortcomings, especially when it comes to gender, because neither in Malayalam nor in English, there is any gender,” he said.

“I do not understand why a table is masculine and why a flower is feminine. Since every word spoken inside Parliament is recorded, I do not use Hindi. But I do give sound bytes outside Parliament,” he added.

The Thiruvananthapuram MP is pitted against veteran Congressman Mallikarjun Kharge for the October 17 polls to the party’s highest post. The election result will be declared on October 19.

The voting will take place on October 17 in every state capital through a secret ballot. There are around 9,300 delegates, including 1,250 from Uttar Pradesh, who are eligible to vote.

Earlier in the day, Mr Tharoor took a veiled dig at the Kharge camp, saying some colleagues were indulging in “netagiri” and telling party workers that they know whom Sonia Gandhi wants elected.

If anyone has any “fear or doubt”, the party has made it clear that it will be a secret ballot, he said urging Congress delegates to listen to their hearts while voting.

“I also asked Sonia Gandhi how she views the elections. She said it is very good for the party and you fight with full courage and we will stay neutral. She had said that there will be no official candidate from their side,” Mr Tharoor told reporters.

Mr Tharoor emphasised on “decentralisation” in the organisation so that all decisions are not taken in Delhi. He said there should be “ready access” to the party president.