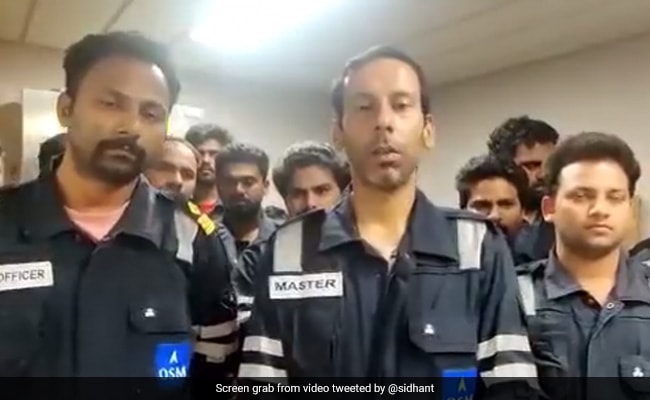 16 Indian sailors have been detained in Equatorial Guinea. (File)

Minister of State (MoS) for External Affairs V Muraleedharan on Saturday (local time) visited home of Sanu Jose, who is among 16 Indian sailors who were “detained” in Equatorial Guinea, and said the information received is that the ship has been handed over to Nigerian authorities and request will be made for consular access once it reaches the port.

Sanu Jose is the Chief Officer from MT Heroic Idun and is among Indian sailors who were detained in Equatorial Guinea.

The Ministry of External Affairs (MEA) said on Thursday that is aware of the problem of 16 Indian sailors who were stuck in Equatorial Guinea, adding that the government is making all efforts for the early resolution of this issue.

“We are aware of the consular issue in Equatorial Guinea, our understanding is that 16 Indian sailors are stuck there,” Ministry of External Affairs (MEA) spokesperson Arindam Bagchi said during a press briefing.

“We are in touch with detained sailors and we are making all efforts for the early resolution of this issue. Right now, they appear to be in Equatorial Guinea,” he added.

“Since their detention in mid-August, this Mission has been in regular contact with the crew members over the phone. We have also had several consular access/visits to them. We are closely monitoring developments and are actively engaged for an early resolution of the issue,” it added.

“They have been detained since mid August allegedly without any dear cause. The ship which was scheduled to pick up a shipment oil from Nigeria was approached by an unknown and unidentified vessel claiming to be from the Nigerian navy while waiting to pick up their shipment,” he said.

Rahim, a member of Rajya Sabha, said after being detained, the authorities in Equatorial Guinea allegedly conducted and investigation and demanded the ship to pay a hefty fine to be released on September 28.

“The owners of the ship paid the fine hoping to ensure the safety of the crew. Yet the crew are yet to be released. Although they have not been mistreated by the authorities in Equatorial Guinea, their continued detention has caused severe mental distress and deterioration of physical health of the crew. Now it is alleged that the crew are to be handed over to Nigerian authorities. This has caused further distress and panic among the crew. They are now in fear for their safety,” he said.

Rahim, who had tweeted his letter on Sunday, sought the minister’s intervention for safe return of the crew members and hoped for swift resolution of the issue.

The Indian mission in Equatorial Guinea had responded to his tweet stating that they are actively engaged for an early resolution of the issue.

Video: Visit To This Bengaluru Airport Terminal Feels Like Walk In The Park