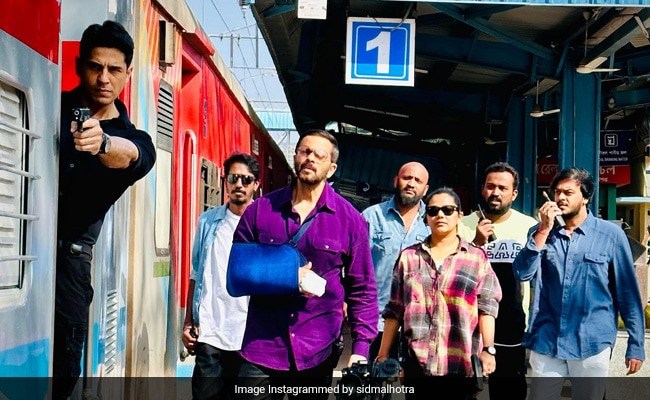 Sidharth Malhotra has shared a behind-the-scenes picture from the sets of his upcoming cop-drama series Indian Police Force. The Rohit Shetty project also stars Shilpa Shetty and Vivek Oberoi. The picture shared by Sidharth is from a railway station sequence in Hyderabad. The actor, who is standing inside at the gate of a train, is seen pointing a gun at someone. We can see Rohit Shetty and the team keeping a check on the shot. Along with the picture, Sidharth wrote, “Rohit Shetty. ek number Team shooting action. #IndianPoliceForce #rohitshettyteam #Hyderabad.”

If you are wondering about what happened to Rohit Shetty’s hand, allow us to walk you through it. Earlier this month, Rohit Shetty managed to pick an injury on the sets of Indian Police Force. The filmmaker’s spokesperson had said, “Rohit Shetty has got some minor injury on his fingers while executing an action sequence for his upcoming web series Indian Police Force last night. The injury was immediately treated. And, he resumed his shooting shortly after the incident.”

After Rohit Shetty returned to the sets, Sidharth Malhotra and the entire team gave him a warm welcome. The actor also shared a video from sets in which he says, “Guys, we have the OG action master right here who after a very unfortunate incident yesterday is still back on set.” When Sidharth asks “Sir, how are you feeling?” Rohit Shetty, replies, “First, I would like to thank you for all the concerns, the prayers and so many calls… kuch jyada nahi hua he, do ungli mein khali stitches lage he, that’s it… (Nothing much has happened, I have got stitches on two of my fingers)”. Then Sidharth adds, “It all because of Rohit Sir, the OG rock star, who is back on sets…It is not even 12 hours. The whole crew is here.”

For the caption, Sidharth Malhotra poured his heart out and wrote, “A true master leads by example. We all know about Rohit Shetty sir’s love for action and his passion towards the stunts he directs. Last night while performing a car stunt action piece himself, he met with an unfortunate accident. After a sleepless night and a minor surgery, he’s back on set in less than 12 hours. Sir, you are an inspiration to all of us. Love and respect.”

Sidharth Malhotra is also receiving a lot of love for his performance in Mission Majnu, which was released on Netflix on January 20. The film also stars Rashmika Mandanna in the lead role.