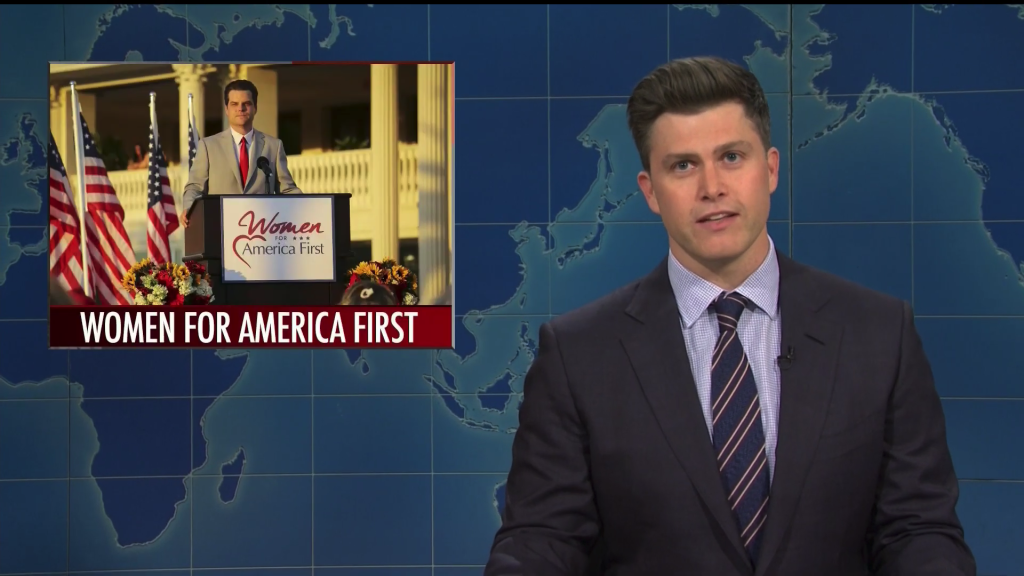 Tonight on SNL, Weekend Update anchors Colin Jost and Michael Che weighed in on new allegations made against their “favorite Florida congressman.”

“Matt Gaetz is back in the news. But this time, it’s good,” said Jost. “I’m kidding, it’s still the sex stuff.”

Reportedly, Jost noted, Gaetz—”who looks like all the dudes from American Pie combined”—sent $900 via Venmo to an alleged sex trafficker. Subsequently, the trafficker is said to have forwarded the same amount to young women in payments labeled ‘Tuition’ and ‘School.’

“If true,” Jost joked, “[this] would make him the only congressman actually helping with student loans.”

While Gaetz remains under investigation by the FBI for sex trafficking, Jost was happy to see, at the very least, that the congressman is taking the allegations seriously. “That’s why yesterday, he spoke at the Women For America First summit, which is a nice change,” he said, “to see women pay for an hour with Matt Gaetz.”

“Former President Donald Trump also released a statement urging his followers to boycott Coca-Cola,” Che continued, “which is surprising because I’d guess Don Jr. would be the one who would have a problem with coke.”

Jost then reflected on President Biden’s executive actions intended to curb gun violence, including those regulating gun kits that you can buy online and assemble at home. “Remember how frustrated and angry you got assembling a dresser? Now, imagine at the end of that, you had a gun,” he joked. “Also, I’ve got to say, it’s weird to see a guy who’s basically doing a Clint Eastwood impression be pro gun control. I mean, look at him. You could put him in Gran Torino and no one would know the difference.”

The final guest appearing on tonight’s Update Segment was The Iceberg (Bowen Yang) that sank the Titanic, who was invited to discuss his role in this tragedy, with the anniversary of the event coming up next week. But while the Iceberg was invited to share his side of the story, he didn’t bite.

“I think my publicist was really clear,” he said. “I’m not here to talk about the sinking. I’m here to promote my album.”