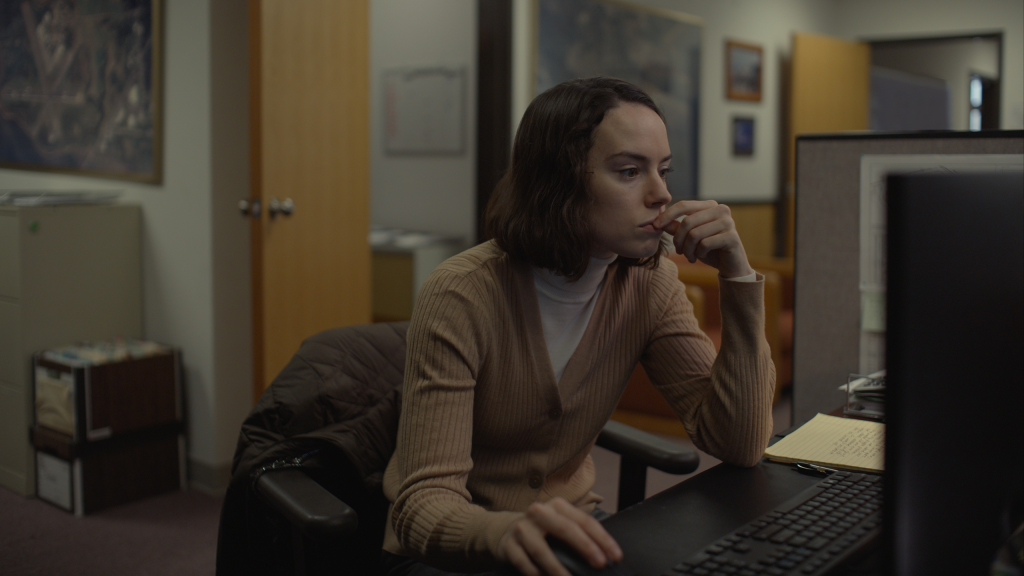 The film begins with shots of this seaside north western town outside of Seattle. It appears to be a dreary, and somewhat lonely place. Next we see Fran (Daisy Ridley) laying in bed peering outside the window at the gray sky. Instead of embracing the morning, she looks terrified to confront it. She works a mundane office job that she likes but is the least animated of her colleagues. Most of her work day is spent daydreaming about death or being overly observant of small things. Her night routine is also humdrum. Fran comes home, cooks dinner (in the microwave), thinks about dying, plays sudoku, ignores calls, brushes her teeth, and goes to bed every night around 10.

Her co-workers are mostly an exhausting bunch of colorful personalities led by Isobel (played by the hilarious Megan Stalter) as they fake laugh and talk about how much they love donuts all day.  The new hire Robert (Dave Merheje), who admits he’s never worked a day in his life,  takes a liking to Fran. Now her fantasies of death are injected with images of him. Maybe she’s found someone who gives her something to live for? Or is she getting her hopes up?

The question I kept asking myself throughout the film is what is the point of the many shots of this dark, overcast city. Fran is often caught in the shadows, or in darkness. Is she hiding something? Or is she just like that? What is the point of all this observation? Then it clicked. Fran is the city–she is the darkness–at least at first. When she is touched by silvers of sunlight is when she begins to connect with those around her and begins to come out of her shell.

There are some striking images aided from Lambert and aided by Dustin Lane’s cinematography especially in scenes where Fran imagines the different ways to die. Also the director is doing some interesting camera work capturing subjects at odd angles and cut offs. There are many images of feet, legs, and talking heads split in half. It took me a while to pick up on what the purpose of that was but it was all about disconnection. If Fran doesn’t see herself as a whole person, how can she see others that way. It’s a genius way of reflecting the psyche of the main character through visuals. Completing the trifecta, is the romanticized and fantastical score by Dabney Morris that turned a bleak subject into something more hopeful.

Daisy Ridley is doing some career best work in Sometimes I Think About Dying. She doesn’t have many lines, but her face is expressive enough to tell the audience what’s going on. The anxiety and silence is where the actress shines and physical expression is what Ridley is great at. This isn’t the type of role I would picture her in, but is ready for more serious roles that display her range of talents.

Lambert took a story about depression and everyday mundane life and turned it into something refreshing, innovative, and funny. Sometimes I Think About Dying is a queer narrative about finding connection within yourself and others around you. The film could have dived deeper into this idea because the romance between Robert and Fran doesn’t always read as authentic. BUT, the focus isn’t their relationship, it’s about finding honesty in these new found personal attachments. When Fran finally tells Robert about her suicidal ideation, he embraces and supports her, and this is a watershed moment for her.  One that says, it’s ok to be vulnerable.