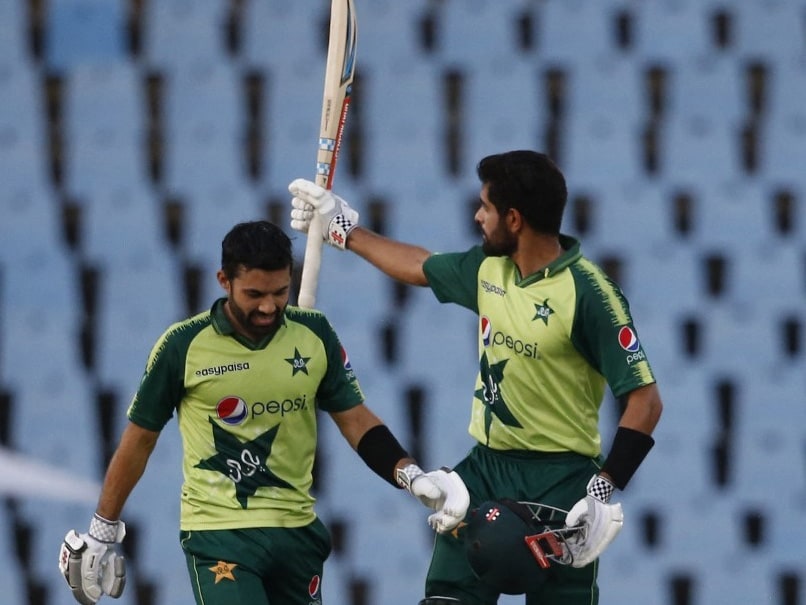 Babar Azam gave a batting masterclass to lead Pakistan to a nine-wicket win in the third Twenty20 International (T20I) against South Africa at SuperSport Park in Centurion on Wednesday. Babar hit 122, his first T20I century, and shared a record Pakistan first wicket partnership of 197 with Mohammad Rizwan (73 not out) as Pakistan chased down a challenging target of 204 with two overs to spare. Virtually the only flaw in a dazzling batting display by the Pakistan captain was when he was dismissed with only seven runs needed, nudging an attempted ramp shot off Lizaad Williams to South African wicketkeeper and captain Heinrich Klaasen.

Rizwan embraced his captain as he started on his way back to the dressing room while several South African players ran to congratulate him after an innings of almost flawless timing and placement.

Speaking in Urdu at the post-match presentation, Babar said he was delighted with his performance.

“I stick to my strengths,” said Babar who earlier Wednesday had replaced India skipper Virat Kohli as the world’s top-ranked one-day international batsman.

Babar gave credit to Rizwan, who for the second time in the series remained unbeaten in a successful run chase.

He pointed out that Rizwan was fasting during Ramadan but nevertheless was involved throughout the match both as wicketkeeper and batsman.

It was the ideal riposte by Pakistan, who took a 2-1 lead in the four-match series after being well-beaten in the second match in Johannesburg on Wednesday.

Babar and Rizwan shared the fourth-highest partnership in all T20 internationals, while Babar made the highest individual score by a Pakistan batsman, beating 111 not out by Ahmed Shehzad against Bangladesh in Dhaka in 2014.

Babar’s previous highest score was 97 not out against the West Indies in Karachi in 2018.

It was Pakistan’s highest successful run chase, eclipsing the 189 for six they made against the same opponents in Johannesburg four days ago.

It continued a run of outstanding form by Babar in Centurion after he hit 103 and 94 in two one-day internationals earlier in the tour.

The final T20 international will be played at the same ground on Friday.

“They batted really well, they made a lot of good balls look bad,” said Klaasen.

The skipper admitted South Africa had failed to capitalise on a hard-hitting opening stand of 108 between Aiden Markram (63) and Janneman Malan (55).

By contrast, Babar praised his bowlers for coming back strongly after being punished by the South African openers.

South Africa finished with 203 for five but it was not enough on a ground with a reputation for high scoring.

“We maybe lost a bit of momentum at the end,” said Klaasen.

“We tried a lot of things but our display in the field was poor.”

Two misfields in the second over enabled Pakistan to get off to a quick start, while Rizwan survived a straightforward catching chance to backward point off Beuran Hendricks when he had 51.

Outfest has unveiled the dates, venues, and lineup for its 39th film festival, which is returning to in-person screenings more than a year...
Read more
Previous articleHuge Fire In Delhi’s Punjabi Bagh, 22 Fire Trucks At The Spot
Next articleRaffey Cassidy, Sam And May Nivola Join Noah Baumbach’s ‘White Noise’ – Deadline
LocalTakSabse Tez