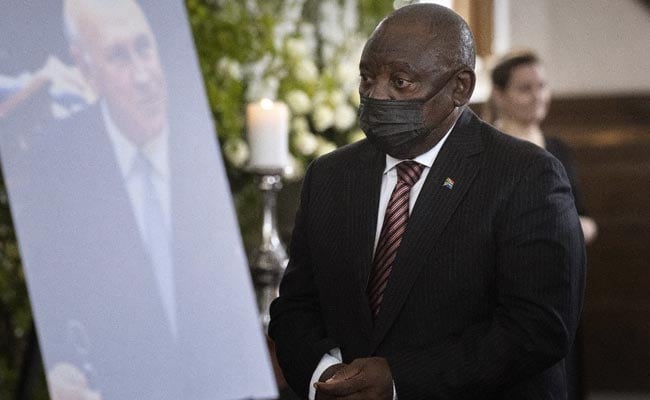 South African President Cyril Ramaphosa on Sunday described the late FW de Klerk as “brave” for defying his party to negotiate an end to white minority rule but also recalled the horrors of the regime he led and his fear of democratic change.

Frederik Willem de Klerk, credited with supervising a peaceful transition from white-minority rule in South Africa to a Black-majority government led by Nelson Mandela, died last month at the age of 85 after battling cancer.

“In taking such a bold step, F.W. de Klerk went against many in his own party, and against many white South Africans,” Ramaphosa said on Sunday at a state memorial service for the former leader.

De Klerk shared the Nobel Peace Prize with Mandela in 1993 for his role in scrapping apartheid, but many Black South Africans suspect he was motivated entirely by pragmatism rather than a change of heart, given that the government was internationally isolated and facing the prospect of civil war.

On his death bed, however, de Klerk apologised “without qualification…for the pain and the hurt and the indignity and the damage that apartheid has done”.

Ramaphosa began Sunday’s eulogy by reminding mourners that de Klerk was “raised in the ideology of racial superiority (and) committed to the defence of an abhorrent and inhumane system”.

Highlighting its inhumanity, Ramaphosa recalled the murder and torture of activists of the African National Congress, which now rules the country, such as the hanging of Solomon Mahlangu.

He suggested that de Klerk had had few options when he started the peace talks that ushered in democracy.

“The country was faced with a stark choice between a negotiated settlement and protracted civil strife…far more destructive than anything we had ever experienced before,” he said.

Ramaphosa also noted that de Klerk was ambivalent about the democracy he helped initiate.

“Even as he entered into negotiations, he was fearful of majority rule,” the president said.

After some deliberation, de Klerk’s funeral was a private ceremony last month. Giving a state funeral to a former apartheid ruler, even one who negotiated its end, could have provoked protests.