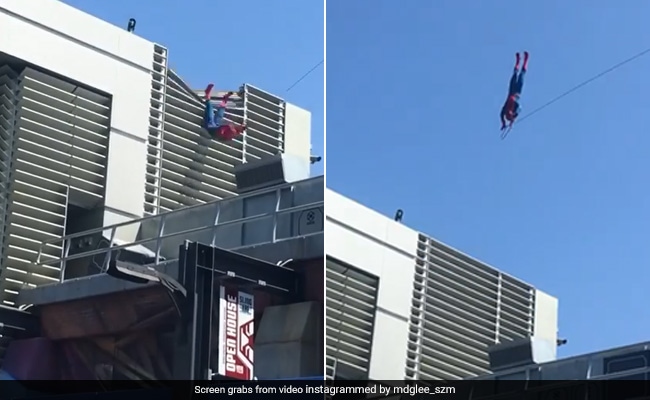 Since being shared, the video has taken the internet by storm.

A stunt performed by a Spider-Man robot went wrong at the Disney California Adventure Park in the United States.

A video posted on Instagram shows the Spider-Man robot taking a flight on a rope while swinging and doing flips. However, seconds later, the clip shows the landing did not go as planned.

Watch the footage below:

The moment was recorded and uploaded to social media, where it quickly went viral. Many people thought it was a person and that a tragic accident had just occurred, while others wrote, “Dummy having a bad day.” One user said, “Looks like Spidey needs to ask Dr Strange another favour.” Another jokingly added, “Imagine people who thought it was a real person.”

The Spider-Man robot took flight after being swung from a rope that simulates a spider web. The android, however, crashed into a building, which according to Fox11, the robot should have landed on.

Following the incident, the show was paused for a short period of time, but was resumed on the same day, the outlet reported.

Meanwhile, speaking of robots, in the past few years, bots have evolved so much that they can now carry out various duties that are usually assigned to humans. Robot creators have also become even more ambitious rolling out a new wave of humanoids that are developed to perform human-like tasks. It doesn’t matter if one believes that the evolution of humanoid robots is alarming or captivating as they are in our future either way.

Previous articleWBJEE result 2022 to be released on June 17, here’s how to download
Next articleAlia Bhatt Enjoys Lunch Date With Mom Soni Razdan And Sister Shaheen Bhatt In London
LocalTakSabse Tez