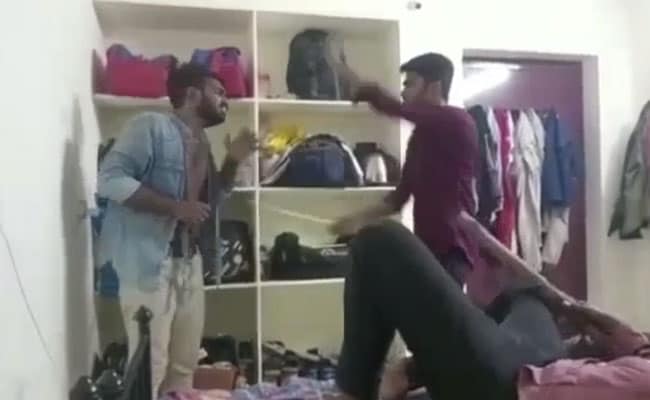 The college Principal and management are being questioned.

Four students of a private engineering college at Bhimavaram in West Godavari district of Andhra Pradesh were arrested after a video went viral of them mercilessly beating another student inside a hostel room even as he is begging to be spared.

A video of the incident shows the victim pleading and apologising while the assaulters keep hitting him with sticks. His shirt looks torn, and he is asked to take it off.

The victim and all the accused are studying computer science at the SRKR Engineering College, and the incident reportedly took place a couple of days ago.

The victim student, Ankit, has been admitted to a hospital with injuries all over his body. There are also branding injuries on his chest and hands.

It is suspected that the four assaulters used an iron box to brand Ankit and also beat him with sticks and PVC pipes, though the reason is unclear.

The college Principal and management are being questioned, though the boys were reportedly staying in a private hostel.

Previous article“Need To Be As Clinical As Possible”: Ravichandran Ashwin Ahead Of Zimbabwe Match In T20 World Cup
Next articleWhen Boney Kapoor skipped his exams for not getting curd he wanted | People News
LocalTak™Sabse Tez