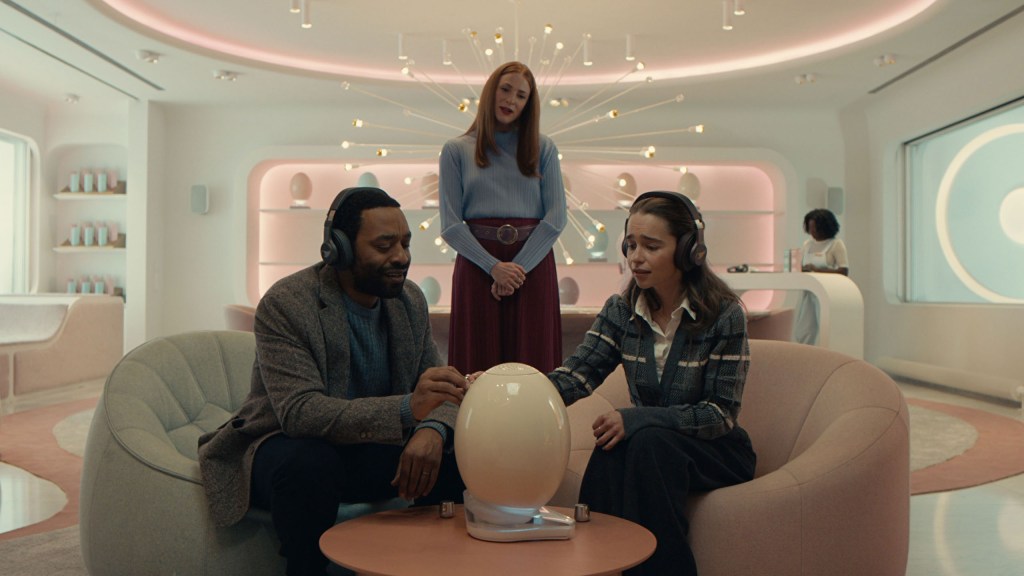 “We are in a global moment where arts institutions must recognize in actionable ways the importance of science in media and entertainment, and Sundance Institute is deeply appreciative that the Sloan Foundation has partnered with us over two decades to nurture that connection,” said Sundance Institute CEO Joana Vicente.”It’s a pleasure to return to Park City to honor our Feature Film Prize winner and grantees after an engaging chat with our panelists about the bright side of science and the ethical framework scientists and storytellers alike bring to the idea of progress.”

“We are delighted to honor Sophie Barthes’ The Pod Generation, an original, futuristic-looking romance that engages with contemporary issues about reproductive technology and its impact on evolving gender roles and what it means to be a parent in the age of AI,” said Doron Weber, Vice President and Program Director at the Alfred P. Sloan Foundation. “At the same time, we are immensely pleased to award three screenwriting fellowships to three outstanding writers – John Lopez, Benjy Steinberg, and Cynthia Lowen – who explore scientific history and revisit the role of great men of science through the perspective of women and maverick sensibilities. This year’s winners are wonderful additions to the nationwide Sloan film program and further proof of the vitality of our pioneering, two-decade partnership with Sundance.”

The Pod Generation was awarded the 2023 Alfred P. Sloan Feature Film Prize and received a $20,000 cash award from the Alfred P. Sloan Foundation at today’s reception. The Prize is selected by a jury of film and science professionals and presented to an outstanding feature film focusing on science or technology as a theme, or depicting a scientist, engineer or mathematician as a major character. The 2023 jury for Alfred P. Sloan Feature Film Prize included Dr. Heather Berlin, Jim Gaffigan, Dr. Mandë Holford, Shalini Kantayya, and Lydia Dean Pilcher.

The jury shared that it selected “Sophie Barthes’s futuristic romantic comedy, The Pod Generation, for its bold, visually-arresting depiction of a brave new parenthood in which AI and artificial wombs provide technological benefits at the expense of our relationship to nature and to our own humanity, and for a woman artist’s exploration of shifting gender roles dissociated from biology.”

Starring Emilia Clarke, Chiwetel Ejiofor, Rosalie Craig, Vinette Robinson and Jean-Marc Barr, Pod Generation takes place in a not-so-distant future. Amid a society madly in love with technology, tech giant Pegazus offers couples the opportunity to share their pregnancies via detachable artificial wombs or pods. And so begins Rachel and Alvy’s wild ride to parenthood in this brave new world. The pic premiered on opening day in the fest’s premiere section. It’s a title that’s up for sale.

Steinberg (writer) will receive a $10,000 cash award from the Alfred P. Sloan Foundation at this year’s Sundance Film Festival for The Professor and the Spy through the Sundance Institute / Sloan Episodic Fellowship. The Professor and the Spy is about “Maria Mayer, Columbia University’s ambitious first female physics professor, who joins the Manhattan Project – only to discover that her research partner is a notorious Soviet spy. As Maria cooperates with the FBI to counterspy on her colleague, she must question the ethics of her country, and thus her own moral fiber.” Steinberg most recently was a staff writer on Season 3 of ABC’s Big Sky.  Previous winners of the Sundance Institute / Sloan Episodic Fellowship include: Our Dark Lady, The Harvard Computers, and Higher.

Lowen (writer and director) will receive a $15,000 cash award from the Alfred P. Sloan Foundation at this year’s Sundance Film Festival for Light Mass Energy through the Sundance Institute / Sloan Development Fellowship. Light Mass Energy is the story of Mileva Marić Einstein, who confronted rampant discrimination to become one of the first women in physics and an essential contributor to the theory of relativity. As barriers to her career overwhelm her, Mileva battles mental illness and her own exclusion from history. Lowen is an Emmy-nominated filmmaker and writer. She’s the  director/producer of Battleground (STARZ) and Netizens (HBO) and is the producer/writer of Bully (Netflix/PBS). She is also winner of the National Poetry Series for her collection ‘The Cloud That Contained the Lightning’ about the making of the atomic bomb. Lowen will also participate in the upcoming Feature Film Program Screenwriters Intensive to further develop her script. Previous winners of the Sundance Institute / Sloan Development Fellowship include: Moving Bangladesh, Chariot, and Tidal Disruption.

Lopez (writer) will receive a $25,000 cash award from the Alfred P. Sloan Foundation at this year’s Sundance Film Festival for Incompleteness through the Sundance Institute / Sloan Commissioning Grant. Adapted from Rebecca Goldstein’s book, Incompleteness takes place in the run up to World War II, when logician Kurt Gödel falls in love and discovers two mind-bending proofs that shake mathematics and philosophy to their cores. However, in surviving an era of collapsing reason, Gödel’s own mind soon turns against him with only his wife Adele to sustain him. Lopez started his career covering film and the arts for Grantland, Vanity Fair and Business Week. He was an associate producer on Hossein Amini’s adaptation of The Two Faces of January and has written for Paramount +’s Strange Angel, Netflix’s Seven Seconds and Showtime’s The Man Who Fell to Earth. John was also a Writing Fellow at the Institute’s Episodic Lab. Previous winners of the Sundance Institute / Sloan Commissioning Grant include: The Futurist, Pharmacopeia, The Plutonians and Challenger.