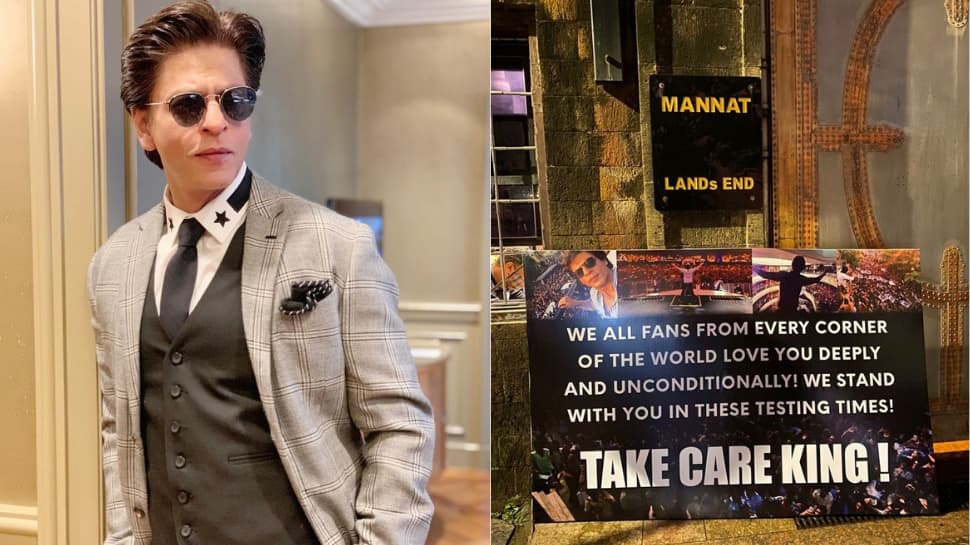 New Delhi: Superstar Shah Rukh Khan’s fans gathered outside his residence Mannat to show solidarity after his 23-year old son Aryan Khan was arrested by the Narcotics Control Bureau on October 3. Fans left a huge banner outside Mannat which had multiple photos of the actor addressing his fans and a note of ‘unconditional support’ from them.

“We all fans from every corner of the world love you deeply and unconditionally! We stand with you in these testing times! Take Care King,” read the note on the placard.

We Love You King and We Stand With You  pic.twitter.com/SE6r9PpTMg

Fans also took to Twitter to extend their support to the ‘Badshaah’ of Bollywood and trended the hashtag – ‘#WeStandWithSRK’.

“Mere fans mere fans nahi mere dost hai. Vo mujhse beintah pyar karte hai” – @iamsrk about his fans We will love you forever my man. ForeverRed heart #WeStandWithSRK,” tweeted one fan, while another wrote, “Sir @iamsrk you are man up since childhood. Hang in there.We are always with you and we love you. #WeStandWithSRK #WeStandWithAryanKhan”.

Check out some of the tweets:

Always beside you and your family..
WE LOVE SHAH RUKH KHAN#WeStandWithSRK pic.twitter.com/J0S8qXvFut

We will love you forever my man. Forever#WeStandWithSRKpic.twitter.com/Z8Zp9mqBhW

This smile is very precious.. it should not fade away at any cost.. ! @iamsrk sir we are always with you ! #WeStandWithSRK pic.twitter.com/97l1bOLLVC

Whereas, actress and producer Pooja Bhatt and Shah Rukh’s Kabhi Haan Kabhi Naa co-star Suchitra Krishnamoorthi had tweeted in support of the actor.

Hrithik Roshan’s ex-wife Sussanne Khan also commented in an Instagram post and wrote that ‘Aryan Khan was at a wrong place, at a wrong time’ she had also written that he is a good kid and she stands with Shah Rukh and Gauri.

Aryan Khan along with seven others was detained by the NCB after he was found at a rave cruise party on Saturday where 13 grams of Cocaine, 5 grams of MD, 21 grams of Charas and 22 pills of MDMA and 1.33 lakhs in cash was seized. The star kid was arrested a day later along with Arbaaz Merchantt and Munmun Dhamecha and was remanded to NCB custody till October 7. The officials have claimed that Aryan’s WhatsApp chat reveals he was buying drugs for some time now.