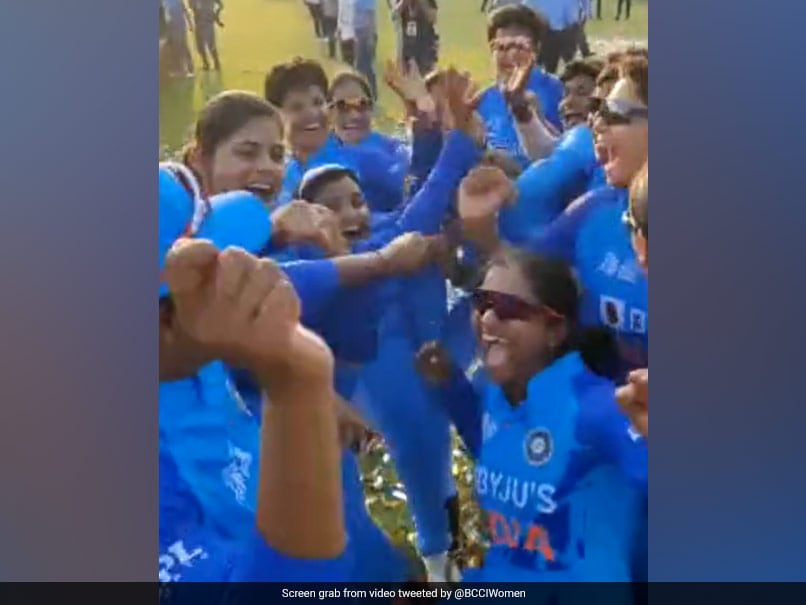 The BCCI shared a sneak peek of the Indian team’s celebrations in Sylhet.© Twitter

India hammered Sri Lanka by 8 wickets in Sylhet to clinch a seventh Women’s Asia Cup title on Saturday. After restricting Sri Lanka to a total of 65/9, India chased down the total inside nine overs. After the Harmanpreet Kaur-led side lifted the title, the Board of Control for Cricket in India shared a sneak peek of the team’s celebrations in Sylhet. The video starts with the players standing in a huddle, with their backs against the trophy. However, it didn’t take long for the celebrations to get out of hands as the players started dancing to ecstatic chants.

“Post-win vibes, be like,” the BCCI captioned the video.

It was a dominant display from India as they limited Sri Lanka to a paltry 65 for nine after being asked to bowl and then chased down the target in 8.3 overs.

Earlier, Sri Lankan batters imploded on a track offering turn after their skipper decided to bat.

Harmanpreet lauded her bowlers and the fielding unit after the win.

“”We should credit our bowlers. Our fielding unit was good from ball one and we discussed that we should not give away easy runs. You have to read the wicket and accordingly place the fielders in right positions,” Harmanpreet said at the presentation ceremony.