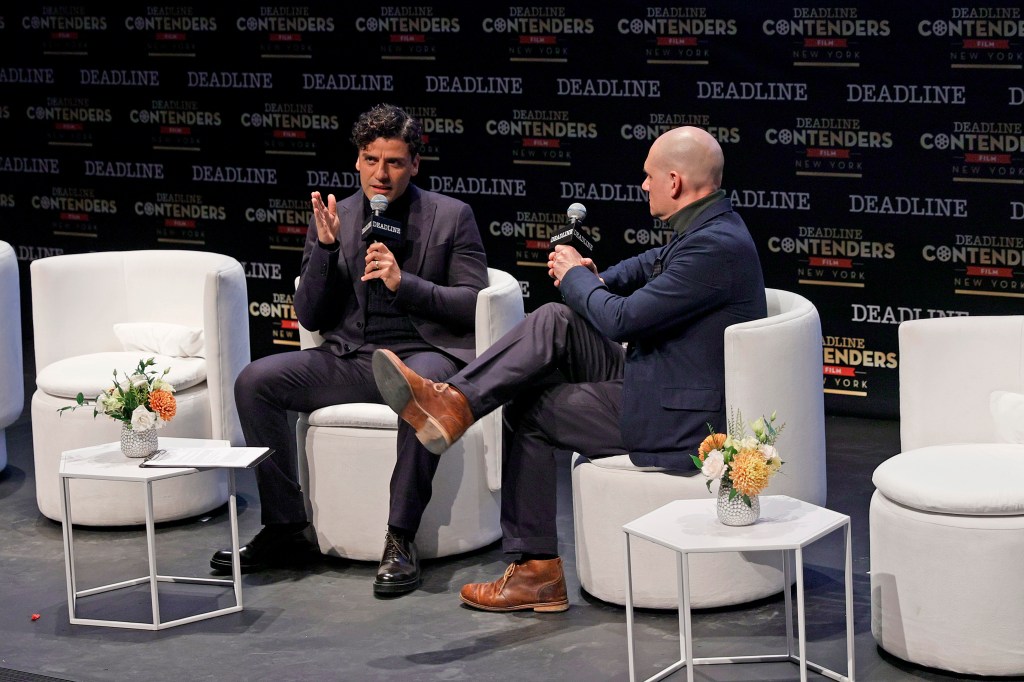 Oscar Isaac had been waiting a long time to work with filmmaker Paul Schrader, and in The Card Counter, he found a much-longed-for opportunity to portray an antihero directly in the mold of the writer-director’s signature works including Taxi Driver, Light Sleeper and First Reformed.

“My relationship with Paul has spanned many, many years,” Isaac told moderator Dominic Patten at Deadline’s Contenders New York on Saturday. “One of my first auditions was for Paul in a little black box theater in the Valley somewhere for a movie that never ended up happening. I did get the part, but unfortunately it didn’t happen – and we kept in touch.”

The Card Counter follows William Tell (Isaac), a military interrogator-turned-card player haunted by his past. His spartan existence on the casino trail is shattered when he is approached by Cirk (Tye Sheridan), a vulnerable and angry young man seeking help to execute his plan for revenge on a military colonel (Willem Dafoe) from both of their pasts. Tell sees a chance at redemption through his relationship with Cirk and takes him on the road, but keeping Cirk on the straight-and-narrow proves impossible, and Tell is dragged back into the darkness of his past. Tiffany Haddish plays a mysterious backer looking to add Tell to her stable of card sharks.

“I think the thing that I relate to probably the most with most of Paul’s writing is the feeling of being an outsider,” Isaac said of his character, an Afghan War veteran. “Paul has always been ferociously an outsider: He’s subversive, he’s punk rock in that way – he complains about it, but he stays true to that thing. He makes these small movies, he goes to those dark places, he tells challenging stories with really challenging characters. And he does it his way and, and there’s something about that that I just really connected to.”

Isaac said he relished “being able to be one of these iconic characters that Paul writes, these guys alone in a room wearing a mask and the mask is their profession, whether it’s a guy that drives a taxi or it’s a guy that counts cards and plays poker. What’s he hiding? What’s he doing, waiting, living out this really dark, sad existence? And you get to know him.”

Isaac described how Schrader uses key techniques of his writing to style to great effect, and to the great excitement of his actors.

“Paul’s talked about how the voiceover that he’s famous for, how it’s like this direct line into the audience,” he recounted. “So because of that, it allows the actor to really play with a lot of restraint and mystery. And then he reveals this thing about him: You know there’s something there’s something dark there, there’s something he’s running from. It’s like he plays with this idea: ‘Do you lose the audience completely? Can you still find a way to connect?’ … It’s so beautiful, what Paul gives to an actor, because he gives a whole treasure chest of behavior to investigate.

As Isaac’s character gradually is shaken from his self-imposed purgatorial existence, the actor explored the tiniest details, including taking a cursive-writing course to get inside William’s bent toward journaling with militaristic precision. “All that is just so much fun for an actor to play with, all these kind of micro-movements, micro-expressions that betray this this taciturn, guarded person.”

And like many of Schrader’s central characters, a punishing guilt exists at the core, Isaac said. “You’re seeing someone who has been traumatized by their own actions, right. It’s not that he he’s a victim of his own actions. And he knows it. He’s been traumatized by what he did to others, and that he won’t let that go. And that guilt – it’s Paul Schrader, who grew up a Calvinist. And he says, ‘You’re born guilty, and you just get guiltier and guiltier.’ And that’s something I could really relate to.”

Paul Schrader Talks “Infectious” Cancel Culture, Why The Oscars Are “Broken” & Being Thrown Out Of A Quarantine Poker Club – Venice