‘The Lost Daughter’ Is “A Searing Portrait Of Parenthood” – Deadline 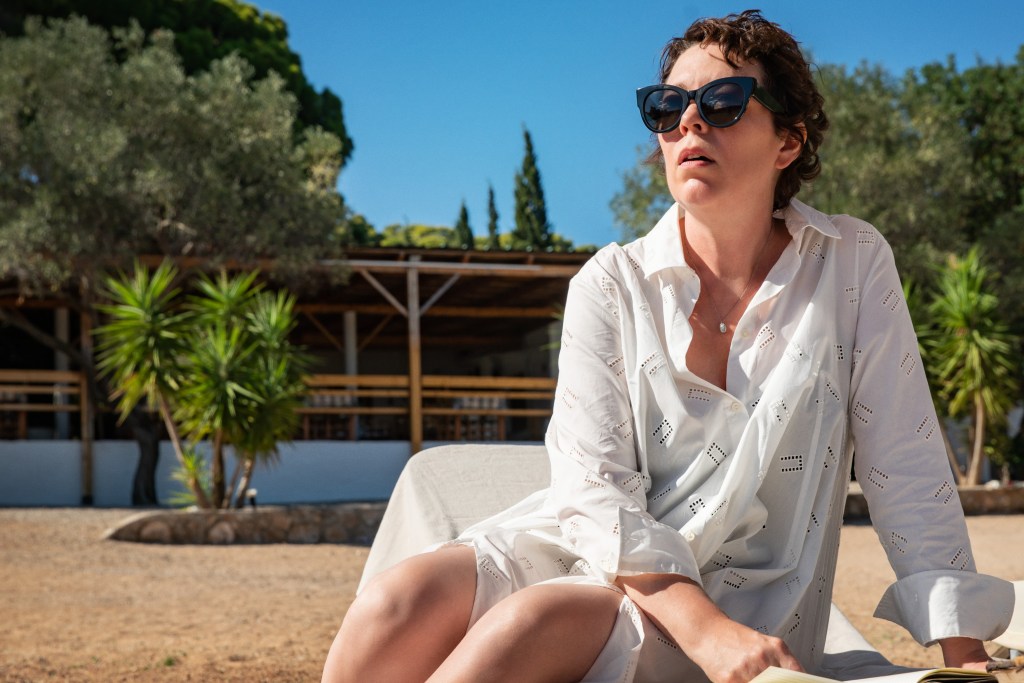 The Lost Daughter, Maggie Gyllenhaal’s directorial debut, is “a searing portrait of parenthood, about womanhood, but about so much more than that,” says producing partner Endeavor Content’s creative executive Negeen Yazdi.

Searing is right. The film, adapted by Gyllenhaal from Elena Ferrante’s novel of the same name, follows the middle-aged Leda (Olivia Colman) when her solo vacation takes a turn following an encounter with Nina (Dakota Johnson), a young mother whose struggles remind Leda of her own traumatic experience of motherhood. Startling honest and gratifyingly raw, the depiction via flashback of the younger Leda (Jessie Buckley)’s struggle to raise her daughters explores issues rarely seen on screen, much less discussed.

“It’s so uncompromising and bold in terms of what it’s saying,” Yazdi says. “And I remember Maggie has always said, it really hit her when she read Elena Ferrante’s book that there were these things that she was reading that she knew deep down she felt, but had never said out loud and never heard anyone say out loud. And so her thought was, ‘Why should we just read about it on our own in our rooms in private? Let’s put it out there and force people to watch it together in a communal experience on the biggest screen.’ And it’s so bold and I don’t think we can underestimate how bold that is.”

Endeavor Content were so impressed with Gyllenhaal’s adaptation and vision alongside Pie Films’ producing partners Talia Kleinhendler and Osnat Handelsman-Keren, that even when Covid hit, they fought hard to keep the film afloat—and won.

As productions shut down everywhere, the film was no longer able to shoot in its planned New Jersey locale, but Endeavor Content worked out a new plan: a quarantined set on the Greek island of Spetses.

“We used our full Endeavor Content infrastructure across the physical production—Covid protocols, post, music, everything—everyone pulled together to come up with a solution,” says Yazdi. “And the key was to find somewhere that wasn’t just viable from a production standpoint or a safety standpoint, but somewhere that has the same heart and soul of the script. And we found Greece and we found a way to keep it incredibly contained, and we found a way to build new self-imposed quarantine and testing protocols to ensure that everything went smoothly.”

And the film now seems wedded to that Greek location, with the island adding to the sense of Leda’s profound isolation and discombobulation. With some creative tweaking, the story seemed made for the setting in fact.

“When Maggie started to work on the script, adapt it for Greece, it became very clear that yes, it was workable, yes, that location did capture that heart and soul,” Yazdi says. “And it was the right place to experience Leda’s journey. Now that you watch it, Greece is a character in the movie. It’s so rich, it’s so beautiful, it’s so atmospheric.”

For Pie Films’ Kleinhendler, the move seemed almost serendipitous. “I think there’s just this movie magic that we ended up there,” she says, “because it just added this whole other beautiful layer to the whole thing. So, this is just an example which sometimes happens in production where, if you embrace it, something that’s a practical decision, because there’s no other way to make the movie at that particular point in time, it becomes this creative, beautiful thing.”

It was while Kleinhendler and Handelsman-Keren were making The Kindergarten Teacher with Gyllenhaal that the idea arose for the latter to direct. And Gyllenhaal already very much had her eye on Ferrante’s writing.

“It was so clear to Talia and I that [Maggie] is a filmmaker,” Handelsman-Keren says. “From a very selfish point of view, we were just fascinated by wanting to watch a Maggie Gyllenhaal directed movie. It’s this moment where you know there’s a filmmaker there, and you just want to see it. And we asked her, we said, ‘Well, did you consider directing?’ And what is it that she has been thinking about? And she said that, if she directed anything, it will be a Ferrante book.”

They secured the rights to Ferrante’s novella in 2018, and Gyllenhaal then wrote the script incredibly fast, Handelsman-Keren says. Pie Films threw themselves hard into the project even before they sought financing.

“The way we work is that we try usually to cast and create the initial package before we go out to finance,” Handelsman-Keren says. “Because that both serves our creative vision and also allows for whoever the partners are that are coming along to understand what is the direction we’re taking. And so, we cast Olivia, Jessie [Buckley], Dakota [Johnson], and Peter [Sarsgaard] before we started actually taking the movie out and looking for partners.”

Despite it being Gyllenhaal’s directorial debut, Kleinhendler points out, “Maggie is not a novice, because she’s been on sets half her life. So, she has a very, very good understanding of how films work, especially on set. And she has obviously a very good understanding about how to work with actors. So, I think that she already came in with those strengths, and I think we saw that in her already as an actress, because she’s super intelligent, always analyzing, always going deeper than just playing a part. So, I think that was there already in her. And I think, going into it, she has two qualities that I think make her brilliant as a director. One is she really knows what she wants, but two is, she’s very open to learning and understanding new things.”

The Lost Daughter is currently at the BFI London Film Festival. It will be in theaters December 17 and available on Netflix on December 31.