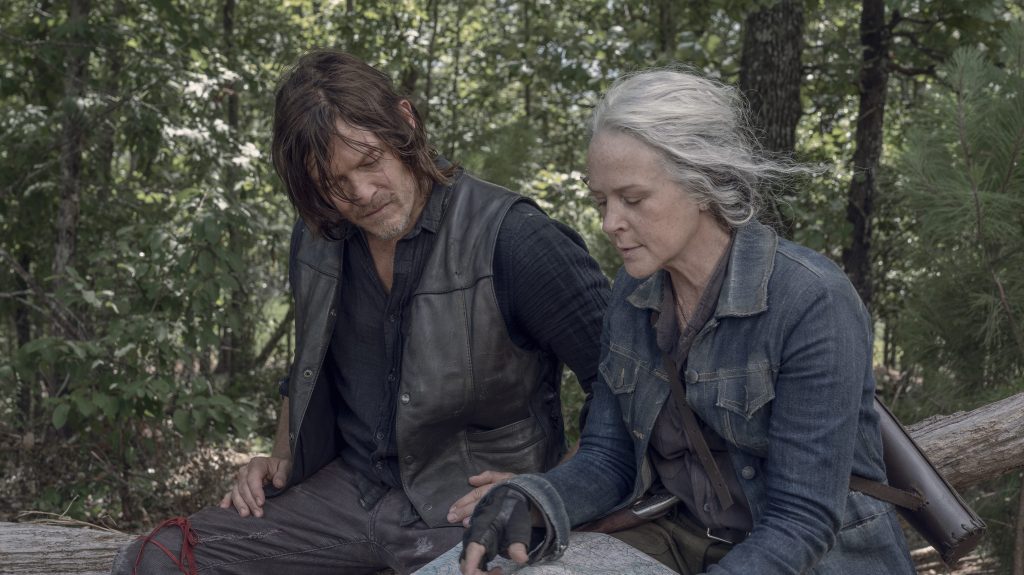 Today at Comic-Con, The Walking Dead‘s Norman Reedus teased that the “Daryl-Carol story isn’t over yet”—referring to the relationship between his crossbow-wielding apocalypse survivor and Melissa McBride’s.

It’s not clear what Reedus was hinting at today, even if Daryl and Carol have been close since the series’ inception. But Reedus’ comment was particularly notable in considering the Daryl spinoff, first announced in September 2020, which is set to premiere next year. While his longtime TWD co-star McBride was originally set to join him in the new series—reprising her role as Carol—she exited the project in April of this year. AMC cited travel logistics as the reason for her departure, with co-stars Reedus and Jeffrey Morgan among those defending her from substantial fan backlash that followed, as Reedus took the blame for her exit in some corners. “Some of you have gone WAY too far,” TWD actor Morgan told his Twitter followers on April. “Attacking Norm for crap he has NOTHING to do with? Melissa made a call that was hers alone. She wants/needs a break. Respect that. Factors involved that are nobody’s business. Norm, who’s given more than anyone to you all. Just SHITTY.”

In a May appearance on The Tonight Show Starring Jimmy Fallon, Reedus said that McBride is taking a break, which is well deserved after so many years of hard work on The Walking Dead. “Twelve years is a grueling schedule and she wanted to take some time off, so she’s doing that. She deserves it,” he said. “I imagine [Daryl and Carol] are gonna meet back up at some point and I might even meet up with some other characters down the road. But she’s taking time off and in the meantime, they were like, ‘Hey, you wanna go on a mission?’ And I’m like, ‘Yeah! Let’s go on a mission.’”

Reedus and McBride were in San Diego today for their final Comic-Con bow as part of The Walking Dead, which is returning for its final set of eight episodes on October 2nd, after more than a decade on the air. Those joining them on the Hall H panel moderated by Talking Dead‘s Chris Hardwick included The Walking Dead Universe’s Chief Content Officer Gimple, showrunner-EP Kang, director-EP and Special Effects Makeup Supervisor Greg Nicotero, and cast members Josh McDermitt, Ross Marquand, Seth Gilliam, Lauren Ridloff, Cailey Fleming and Michael James Shaw.

The Walking Dead is produced by AMC Studios. Gimple and Kang exec produce the series alongside Kirkman, Nicotero, Gale Anne Hurd, Dave Alpert, Joseph Incaprera and Denise Huth. Also in the works at present, as an expansion of The Walking Dead Universe, is the spinoff Isle of the Dead scheduled to premiere in 2023, which has Morgan and Lauren Cohan reprising their respective roles as Negan and Maggie.