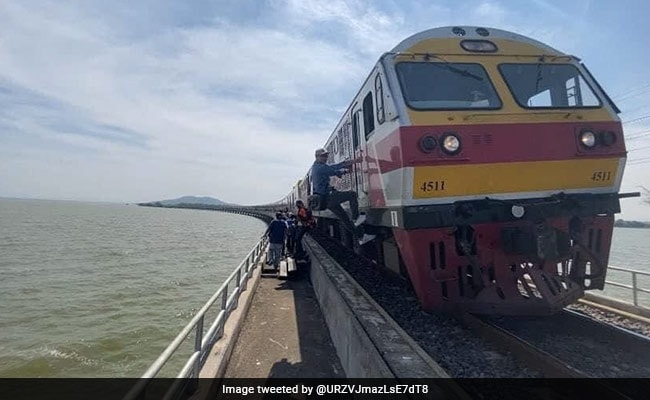 The train stops at a viewpoint for 20 minutes to allow passengers to click photos.

Thailand’s ‘Floating Train’, which treats passengers to magnificent lake views, have been drawing a large number of travellers this year due to a post-monsoon rise in water levels. According to news agency Reuters, tickets have been selling out fast for the ride. The train starts from capital Bangkok for the day-long trip and takes the travellers to a bridge over the Pasak Jolasid Dam, Thailand’s largest earth-filled dam, in Lopburi province. The train runs only at weekends between November and February and tickets have been sold out until New Year, according to Reuters.

After starting from Bangkok, the train passes through the Pasak Jolasid dam six hours away on an elevated track just above the water level, which officials say has been unusually high this year.

It stops at the dam station’s viewpoint for 20 minutes, allowing passengers to admire the view and click photos, before taking them to next stop.

“I’ve never seen anything like this before,” Bunyanuch Pahuyut, who was among 600 passengers who travelled on the route on Sunday, told Reuters.

The weekend train operation is expected to give a boost to domestic tourism, which has been hit by COVID-19. The train will operate on all weekends, except on December 31 and January 1, according to The Nation Thailand.

A round-trip from Hua Lamphong station in Bangkok to the Pa Sak Jolasid Dam costs THB330 (Rs 725) for non air-conditioned and THB560 (Rs 1,230) for air-conditioned travel. The sale of tickets are began from November 1 this year.

Tickets can be booked at train stations as well as online, on the official website and mobile application of State Railway Thailand.